“How many times have you read the Hobbit?”, I asked the guy sitting next to me on the bus. “Oh. Not that much. Not in geek territory, really.  Just three times. Though, I must admit, I’ve seen all the movies, dozens of times each”, he replied.

I thought this would be a light side excursion to take in some Lord of the Rings/Hobbit sites, but it had now taken the shape of a pilgrimage.

Sitting next to us was a guy who had relayed, as part of his camping stories in New Zealand, that he had been on one of the country’s Great Walks, lost track of time, because he was busy reading – you guessed it – The Hobbit (presumably for the third time), got frazzled trying to get to the bottom of the mountain, slipped – nearly killing himself, only escaping by miraculously grabbing hold of a branch, which he now carried with him wherever he went, including on the bus next to us.

After I asked him if he was carrying this stick as an homage to Gandalf – he laughed, not having made the connection, insisting it only had to do with him having a strong connection to it.

“Wow. That’s an amazing series of events. And the fact you were reading The Hobbit beforehand!”, I said.

“Yeah, that and The Lord of the Rings series are the only books I’ve ever read. I’m over the moon to be here”, he replied.

I looked over to Rose who gave me a look of what-did-you-bring-me-to?, I shrugged, wondering if I’d made a really big mistake.

Thankfully, once we got off the bus and met our guide, I loosened up a bit, realizing that our Hobbitaholic was now offloading his knowledge on the guide’s shoulders, giving Rose and I some buffer to look around.

Quickly, we realized the place was insane. 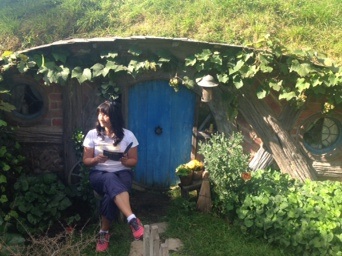 The story of how it came to be is pretty amazing.

After the first set of films, Lord of the Rings, the village of Hobbiton, used in the films, was being torn down once production was over. However, before it could come down completely, the next series of movies – The Hobbit – was signed on for production, and the film company would once again need the set.

The set, however, was built on a sheep farmer’s land, who decided on this second production that he would put up 50 percent of money to make it a permanent installation if the film company put up the other 50 percent.

The result is that everything is real from the building material used to build the doors, plus the flowers, plants and vegetables, which, of course, all translates into real money. 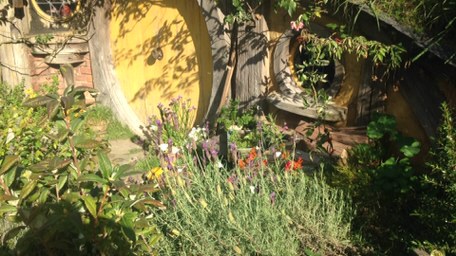 We spoke with the guide, and apparently 2000 people come through a day in high season, notching up plenty of revenue, which helps because there are 60-110 FULL-TIME employees, including 6 gardeners who not only get paid, but get to take home all the vegetables they grow. So, everything you see in these photos is made of real material.

I liked the films, maybe not as much as our friend, but I definitely got into them enough, that after a moment when our friend was trying to convince the guide to let him go through a gate saying “NO ADMITTANCE”, I looked over to him and said: “YOU SHALL NOT PASS!”.

Triumphant, I looked to Rose who only shook her head, and had an expressionless look saying: “What?”.

I could swear, I at least saw the guide smirk.

Regardless of your interest in the films, it’s hard to fault the production of the place, which includes a fully done up, working, medieval-looking pub in the style of Hobbit, which is also rented out for parties.

As our Hobbitaholic persisted in his geekiness, unwavering to himself and his beliefs, Rose got philosophical, saying: “Look if you’re going to do this, why not do it with a #1 fan?”.

So, with that, I asked if I could take his picture, as he pretended to tend bar – our friend on the pilgrimage to the Promised Land: