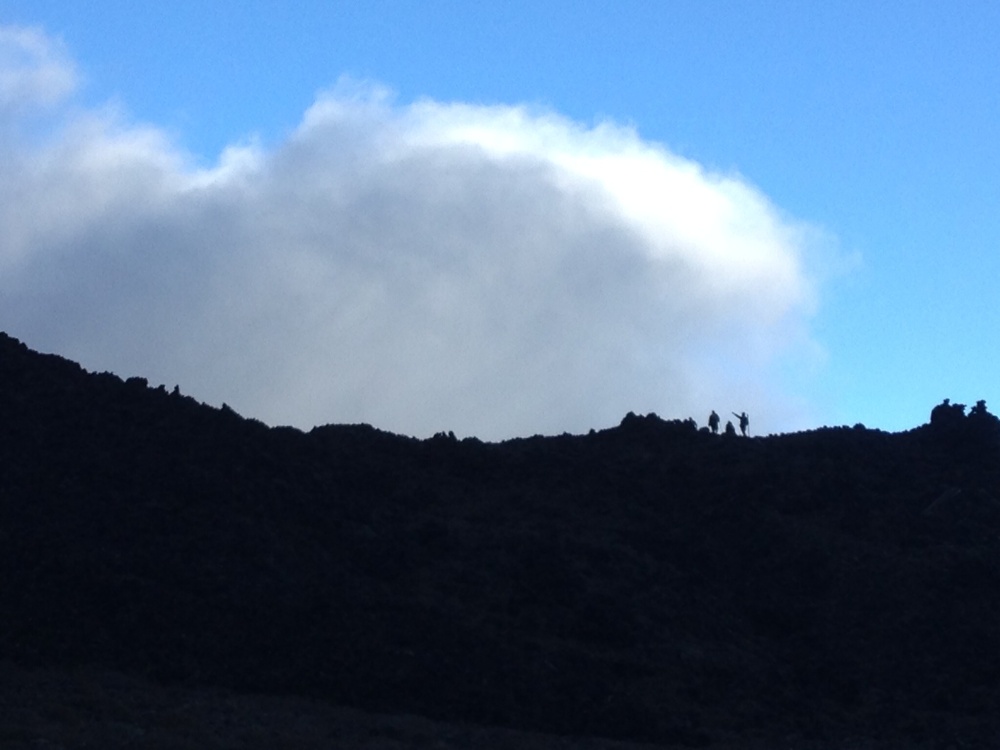 Tongariro Crossing is a 19.4 km day trek across an alpine range in the middle half of the North Island. It’s touted by many as the best one day hike in New Zealand, revealing views of volcano craters including a volcano used in Lord of the Rings (sorry, it’s everywhere here), lakes and other awe-inspiring vistas that could easily make the centrefold of National Geographic.

How hard could it be? (psst. That’s foreshadowing.)

We arrived in the National Park at a backpacker’s lodge, right in front of the mountain we were about to climb. In any group setting, I immediately like to size up the membership.

Rugged mountaineer looking guy over there. Hmm. North Face brand emblazoned guy over there. Eeesh. Sixtyish woman with a non-descript backpack. Good, phew. Wait, she took off her sweater and has the muscles of a zebra.

As surprised as you might be to hear this, Rose and I are largely – what’s the word for it? Oh yes. Dilletantes, complete bullshit artists. We barely know what’s going on in most situations, and so instead, often play pretend.

While I won’t say we are exactly like the guy or girl barrelling down a ski hill in jeans with a jacket open, arms outstreched, hoping he/she will get to the bottom before a broken neck.

I will say, using this ski metaphor, while we might be wearing suitable ski pants, and our arms won’t be oustreched in a panic, our guts are busy churning with the knowledge that we really aren’t qualified to be doing what we are doing.

It’s probably not fair to bring Rose into this as deeply as me. She has her moments, sure. But maelstroms of anxiety are more my hobby. For the sake of the story, though, and since this is a shared blog, I’m bringing her along on Mt. Panic.

We begin. It’s morning, the day of the hike.

Clouds are sitting on top of the volcano and our bus driver, who has the chiseled look and clipped phrases of a drill sergeant, says: “You see those clouds up there.” “That’s where you’re going!”, he laughs to himself, while downshifting the bus en route to the start of the track.

I look over to Rose with a smile that says: “We’ve done it again.”, which is followed by Rose offering comfort: “Naw. It’ll be okay. You see how many 60+ year olds are on board?”

And I thought to myself: “Sure and did you see the muscles they brought with them?”

The track started off fine, though we started to feel the wind, which we understood from the forecast would be around 65km/hr. But as our military bus driver comforted us:

We stay on our feet, making our way to the first challenge: Devil’s staircase. 1-1.5 hr of steps going up into the mountains. 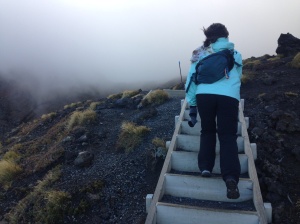 During this portion, Rose and I touched on the following topics of conversation:

We then broke through into a plateau that was the most exciting flat ground I’ve walked in a long time:

Of course, on a volcano walk, we quickly learned that what goes up, must go up again.

We hauled ourselves up the next stretch, which got steep enough in parts that it had a chain bolted into the rock to pull yourself up with. Here, the good news was that we could begin to see where we came from and catch a glimpse of the volcano crater behind us, which showed up briefly before going back in cloud.

You might think as we whiffed the smell of sulfur from the volcanos around us, which I also learned from hours of watching horror movies as a kid was the same foul smell used as a calling card by demons and other bad things coming out of the earth, that it might have been a little bit warm.

I never took off my toque, and Rose wore wool socks on her hands to stand in for gloves. Yet, we marched on, and got to the highest peak at 1850 metres altitude where the gusts were the strongest, and the consequences were the same, as we walked a thin ridge between two craters: one blow too strong and you might end up as an offering for the volcano god. 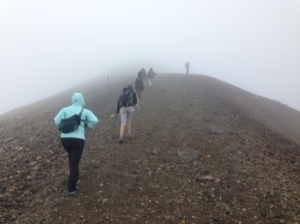 When we got to the other side, the whole path now pitched downwards, which meant everyone had to ski down loose gravel. This I found fun, not only because you could slide easily, but there was a girl who was much more badly prepared than we were.

In sneakers, a t-shirt, and I think she was also wearing shorts – she represented the skier with open jacket and jeans who had no idea what was happening.

While having just walked through darkness, cold and cloud interspersed with spatterings of rain, I began to see the bright side. There was someone worse off than we were.

At this point, we saw the Emerald Lakes, an acidic pool of water in between the craters that looked like a giant spill of Mountain Dew: 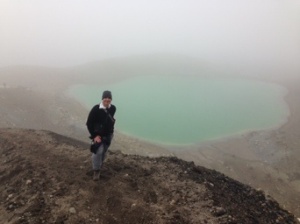 We then made a turn down the mountain, glanced at the map, and realized we were heading down. I think this made it easier to smile, when our environment felt like we were a lava rock inside a gas barbecue:

After a cyclone of wind or two, the impossible appeared. SUN. Big gobs of the stuff, parting the clouds and making life once again worth living.

Now with renewed hope, Rose began to hum Edelweiss from Sound of Music, while I couldn’t help but go with: RICOLAAAAH!. The scenery turned from Beelzebub to beautiful with wildflowers, and other bits and pieces that I recognized from the side of a Swiss Muesli cereal package.

Of course, the park didn’t want you to enjoy yourself too much – (when I read this it sounded like our bus driver’s voice in my head). 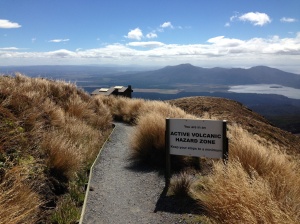 We had a quick bite with other people around us who stopped at the lonely hut on the trail. Few people talked. Instead, the dominant sound was people breathing from their noses as they steered their mouth into another piece of sandwich.

The last kilometer of the walk was the longest, as the alpine scenery turned back into a greeen canopy, and it felt like we were on a neverending trail. I fought the panic enough to convince myself we were going the right way, but it was too much for a guy behind us who screamed ahead at us : “Guys. Is this the right track?”.

Thankfully, yes. The trail opened into a parking lot, and Rose and I shut down.

Notice I’m sitting on the ground in an ashtray, with cigarette butts strewn about. 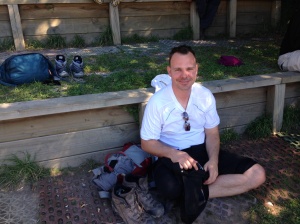 Which, raises the question who wants to smoke at this point? (Amazingly two guys did light up).

Regardless, I now knew I no longer had to move. If there were crack pipes mixed in with the cigarette butts, that was fine with me.