This mushroom has a name. If I were a biologist or botanist I would share it, then wax about its areas of origin and whether you could eat it and see everything in extreme detail for the next 12 hours.

But I have no “ist” designation. Only an active imagination that was largely fed by Saturday morning cartoons as a kid and comic books the rest of the day. And, within that context, this mushroom reminds me only of the Smurfs. 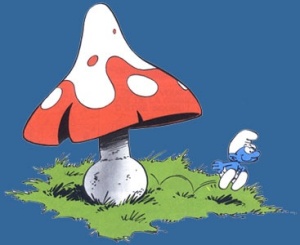 And, to a lesser extent, Tintin:

The point of all this is that these mushrooms dotted the side of the trail on the Kepler Track – a Great Walk in Te Anau (TAY – ANOO) – and, in my mind, gave our saunter a magic feeling as we walked along through a forest of ferns: 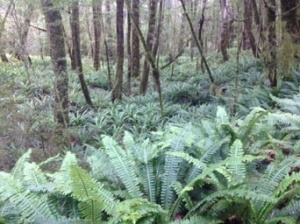 Mossy, fuzzy green that covered everything, and felt, at times, that we were walking through a 60’s shag carpeting store: 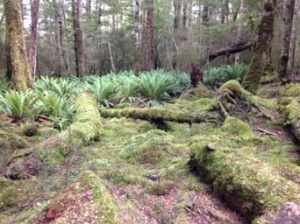 Plus, the requisite babbling brooks, and flowing rivers that immediately brought to mind a kid’s show I remember called: Fables of the Green Forest. 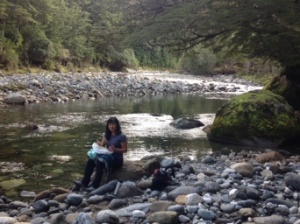 So, why all these allusions to pop culture?

One thought I had was that the landscapes in New Zealand in general, and on the Kepler Track specifically, have similarities to other forests I’ve seen, yet are, at the same time, wildly different. Plus the environments have an untouched, pristine quality that, to my mind, makes them seem almost unreal; so, the closest reference points I can conjure, for what seem like idyllic environments with combinations of plants and trees that are entirely unique, are fantasies about enchanted forests, because I’ve never seen anything like it in reality before (also there must be a reason – aside from just tax breaks – that fantasy film #1 – Lord of the Rings was filmed here).

A second thought I had is see paragraph 2 about an active imagination.

In either case, we were both under a spell walking along, Rose busy photographing as many red mushrooms as she could find, and me imagining Ewoks popping out from behind trees, Luke Skywalker speeding by on that forest bike he rode in Return of the Jedi and Gargamel on his hands and knees reaching under a tree looking for Smurfs.

Quickly the fantasy came to a halt when we met someone walking up the trail with a rifle slung over his shoulder.

“What are you hunting for?”, Rose asked him.

“Deer. There’s heaps of them here.”, he replied, then asked if I’d seen a young guy ahead on the trail.

“Yeah, he was running past us”, I replied

I immediately wondered if “deer” was a euphemism for his son, who may have been running away from him for a reason?

Then, 10 minutes later we ran into two more hunters taking a break on the trail. I asked them where they go hunting, imagining they have a designated spot:

“In there”, the hunter points to the ferns off the trail.

“Right. Okay. Well, good luck”, I replied and we walked on.

Immediately Smurfs, Star Wars and all other kids’ fantasies evaporated in my mind, and in their place were news stories I’d read of hunting accidents. Did those guys seem drunk? Maybe they’d fire towards the track?

I began to see headlines:

“The New Game: Hunters kill two tourists on a hike”.

“Trail of Death: Tourists killed on Kepler Track” (that would go for the more sensational newspaper: Toronto Sun etc.)

Amid all of this – Rose and I were getting into our usual hiking zone of walking way too much. We agreed to doing a day hike on the Kepler Track, which is normally a three day hike, staying over in huts along the route.

However, we turned around on the track at about 12kms, which meant we now had another 12kms to walk back, and started to drag our heels.

As we got closer to the end, Rose complained of sore feet, and me a strained neck from staring too long, left and right into the forest for an orange coloured hunting vest, ready to take cover at the first sign.

We eventually ran into a Park officer on the trail who said that hunters were allowed to be there, but had to do it 500metres off the path, which offered some comfort, despite the fact that, I’m sure a bullet could make up that ground pretty easily.

It occurred to me that had we not known there were hunters, we would have remained under the fantasy spell, and probably interpreted the sound of a faraway gun shot as a branch coming down or maybe a woodpecker doing what he does best, and would have been blissfully unaware that the sound was Bambi being dispatched.

In any case, we got back to the car park, exhausted, and in need of airing out:

Though the idyllic bubble I was under for the first half of the walk had burst, and the Smurfs had fled, it remained a nice walk – which, if we return to do it again, I might add bright orange colouring to my hiking ensemble.

Next stop the Catlins on the Southern tip before swinging up to Dunedin on the East coast. 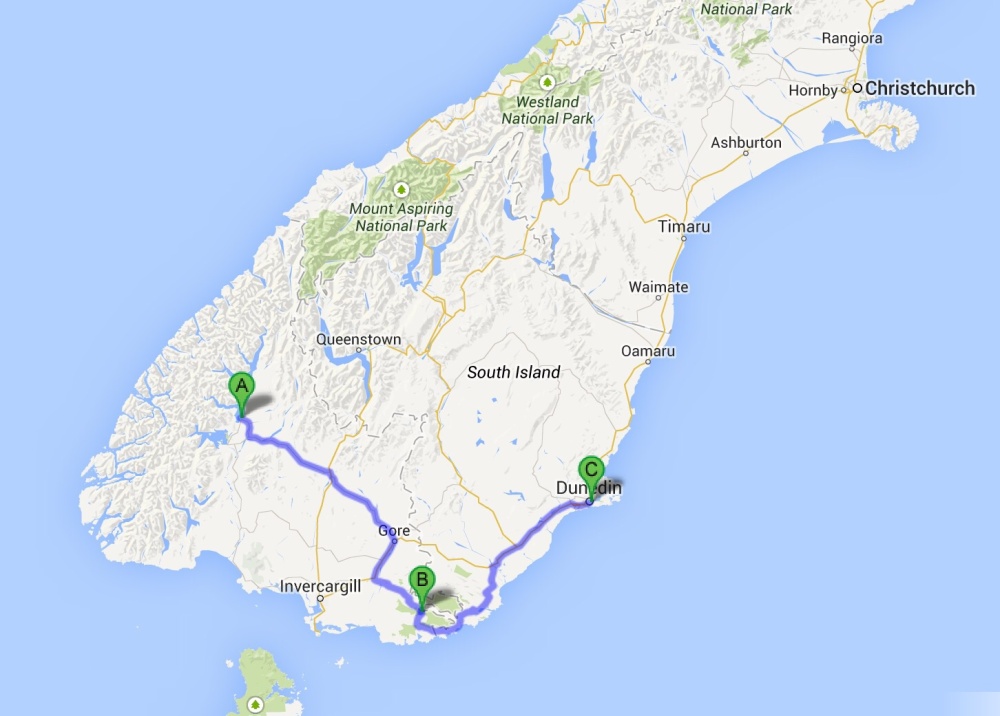