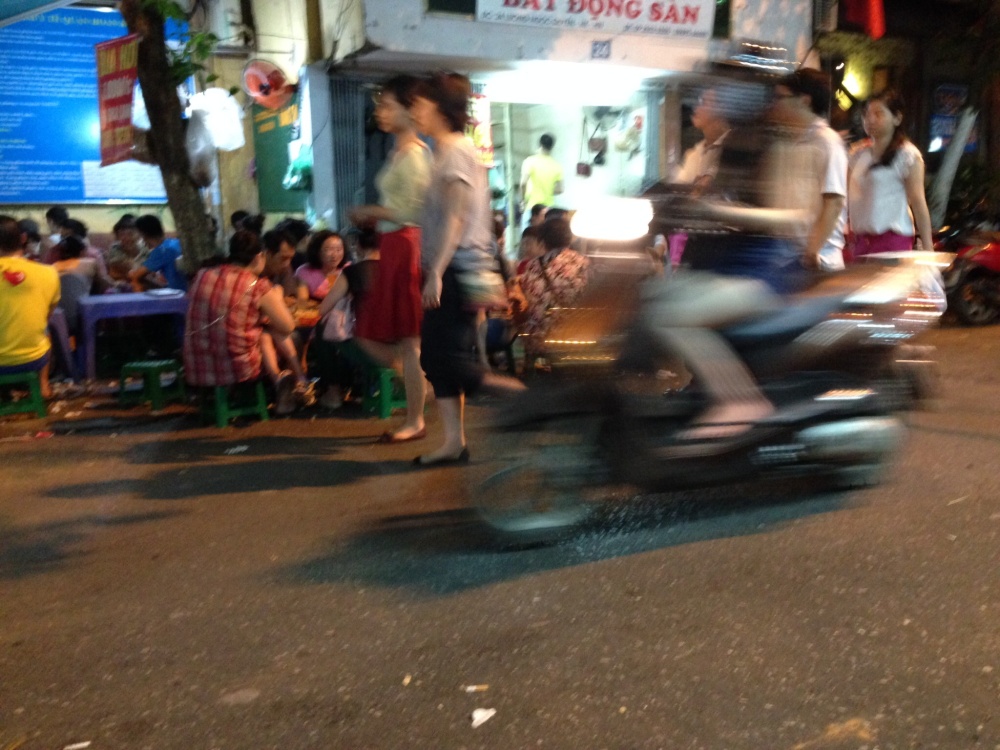 Motorbikes herd the streets with drivers blaring their horns announcing to pedestrian, vehicle, animal and molecule to get the F** out the way. Everyone in Hanoi is coming. Whether walking down the streets, on a bike or selling food, Hanoi is a hustle of activity that’s constantly headed towards you. The trick, we soon found out, was to learn how to roll with it or, in other cases, do exactly as suggested, and learn how to get the “F** out the way”.

Rose and I arrived in the middle of the night, hungry, not sure where to head to find a bite. The concierge highlighted spots on the map with ease, explaining food was waiting just around the corner. I couldn’t understand how it could be so easy with bikes going both ways on a one way street, food vendors taking over the sidewalk with bikes stacked around them, plus cars heading down each street with a stream of pedestrians (who we’d soon join)- all competing for the same, small piece of road.

I saw a dead rat the size of a Chihuahua on the ground, during the brief walk to our hotel, and I thought: “Rats thrive in cities. If he can’t make it, what are our odds?”.

Regardless, we threw ourselves into the madness and wound up two blocks away in a food and trinkets market that was shut off from traffic. But, being Hanoi, we learned – this really didn’t mean anything, as bikes zinged and honked their way through the crowds anyway, even nudging people with their front tire in case a particularly deaf person didn’t get the point.

We found ourselves on a corner of what looked like a homecoming party in a university town. People lining the fronts of restaurants or bars, sitting on small chairs, all with a beer in hand and food in the other – and one guy, busy singing drunk karaoke in the middle of the street as a crowd of hundreds jeered and laughed at him. 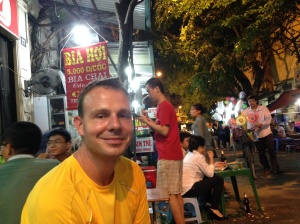 This only lasted a second as I pulled my attention to the right, after hearing a loud bark, and attributed it to a guy who was laughing so hard with his friend, he’d gone mute and the veins in his neck and forehead got more and more pronounced as he turned darker and darker shades of red.

Things were moving so fast, this impression quickly dissolved as I felt someone grab my arm and ask if I knew where a particular bar was.

“Sorry”, I said looking around with a look of confusion and wonder. “I have no idea what’s happening. We just arrived today”.

“Okay, no worries”, he moved on, quickly getting swallowed by the crowd.

Now realizing we were standing in the middle of an intersection, we quickly looked for a spot with empty seats, sat down and waited to see what happened (that’s Rose on the far left). 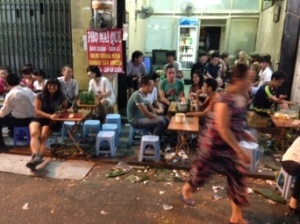 Thankfully, it turned out okay – we got our first bowl of pho, of which I’d eaten enough of in Canada that I felt a small level of comfort from the madness around us.

Honestly, it was beyond anything I’ve ever tasted. So much better than what I’d had in Canada, I couldn’t believe it. Slurping up the bowl and finishing our beer we re-entered the whirlpool of people and waded back through the streets to our hotel.

We soon picked up the cardinal rule of walking in Hanoi – keep walking, don’t hesitate, and bikes will move around you. Easy on paper. But when looking towards a wall of traffic heading your way, and your realize the pedestrian crossing in front of you has no more value than an interesting pattern to look at while bikers stream across it at full speed, it was hard to put in practice. 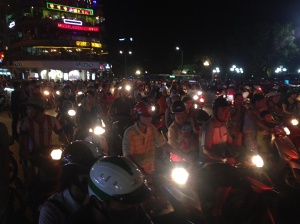 However, we had enough practice on some cross streets on the way back, which helped us get enough resolve to, at least, begin to understand how to avoid being that rat.

And we soon did, as our two friends – Juliana and Matt joined us the next day from Canada for a two week tour of Vietnam. Part deux of our exploits coming soon.