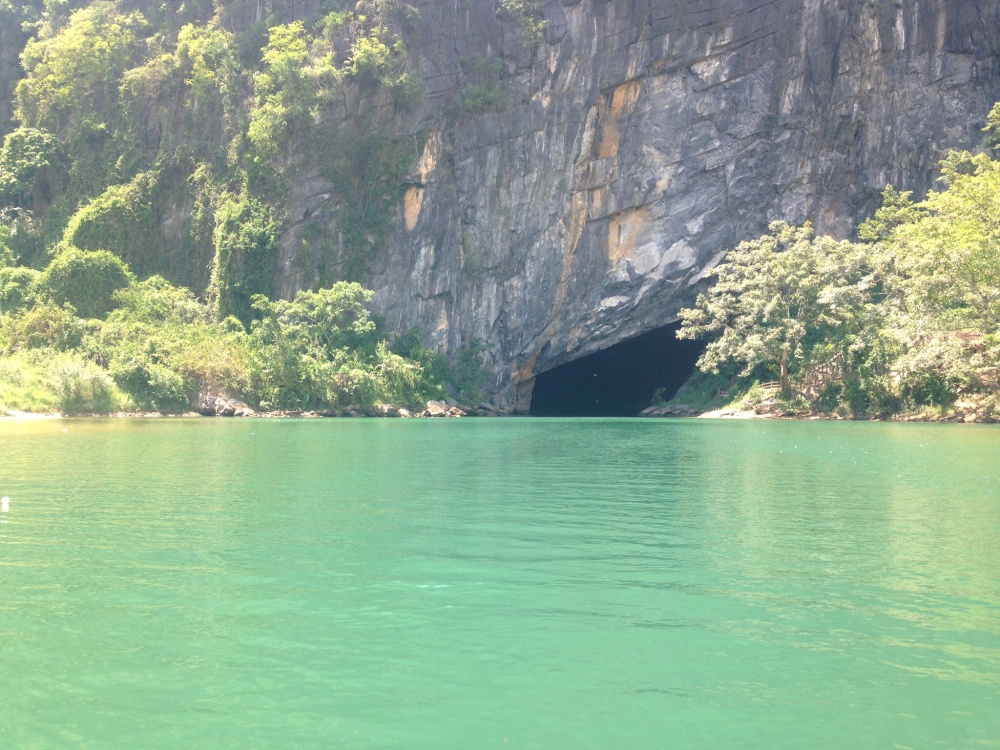 That’s a cave opening, which we drifted into on one of these boats: 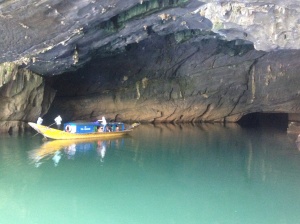 It’s part of Vietnam’s Phong Na-Khe Bang national park where, in the 90s and 00s, British explorers found a massive underground cave system. National Geographic did a big spread on it earlier this year, which, if you’re interested, you can find their much better photographs: http://www.lovethesepics.com/2012/07/mysterious-massive-world-hidden-underground-paradise-fairytale-caves/.

While we’re not visiting the one touted in the magazine as the biggest cave in the world, simply because it costs $3,000 and a few days trek to get there. We opted for the easier cave versions: this one above and the other one called Paradise cave – only discovered in 2005, and open to the public in 2011.

Interesting enough on its own, but I also thought, as a name for a cave, seems a little odd, and makes me wonder how the marketing team came up with it:

“Okay, everyone. Let’s look at what we know.

It’s a cave. It’s dark. It’s humid. It’s underground. It’s dark. Did I mention that already? Well, I should again: it’s very dark. It drips a lot of water. There’s some strange creatures that live there that aren’t found anywhere else. Bats hang around there and, let’s be honest: they shit a lot. Ok. What have we got? What can we name this thing for tourists?

While the name choice seemed strange to me, to another member of Team Canada it may have sounded just right. Juliana was stuck in the crosshairs of jet lag, unable to sleep at night, and during the day, but still tried her best wherever she was:

So, for someone who was badly sleep deprived, a dark cavern where you couldn’t tell if it was day or night, might live up to its billing.

But, unfortunately, she’d have to wait to test the theory as our first stop was riding a boat through the first cave, followed by a small stroll afterwards.

It was a pretty remarkable spot, with huge formations growing off to the side of the boat as you passed:

Sadly, most of my shots look like that: i.e. what is it exactly? I figured as much when I was taking them, but hoped something might come through. This one, I think, can at least provide a sense of scale: 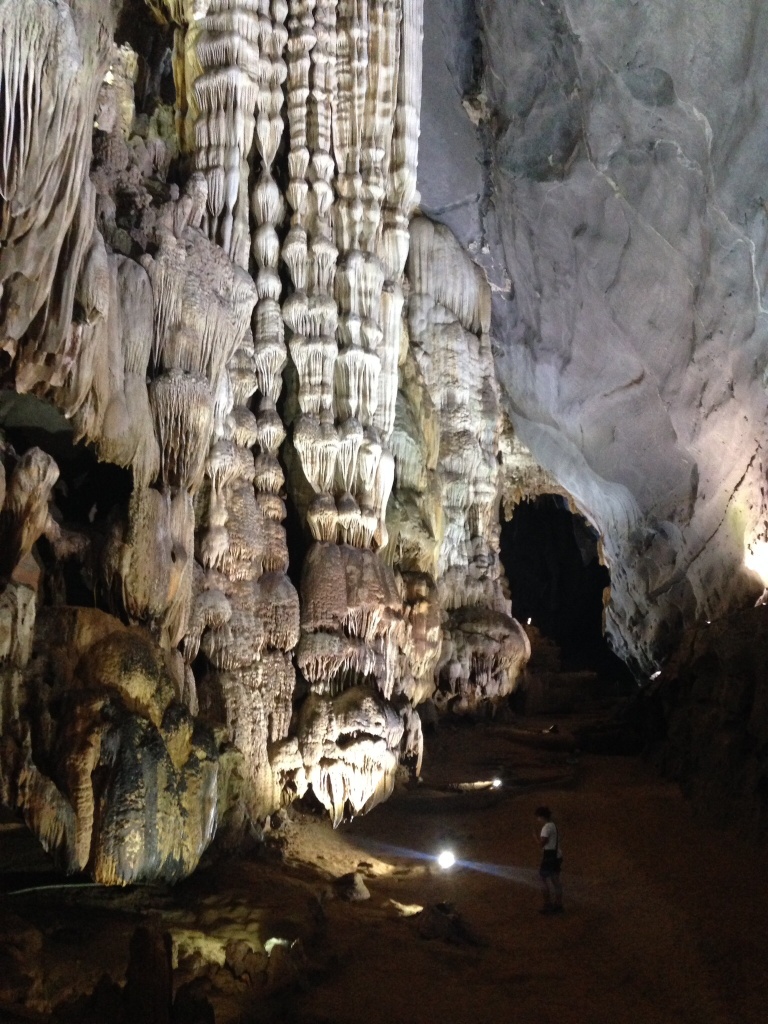 We wandered through here for a bit, and had a funny encounter with someone who was hawking photographs. When everyone got out of the boat to wander the remaining part of the cave, the photographer stopped us and tried to assemble us into a group to take a photo.

1. Our group was not some tight crowd who had been traveling for weeks together (Team Canada excepted). We “met” about 30 minutes earlier, and our general relationship, to that point, was about as profound as meeting a mall greeter.

2. Everyone. Yes, everyone (I know I exaggerate, but this time for true) – had their own camera.

It was on. Flashes were flashing. Clicks were clicking. Photos were hungrily being saved on disk space by everyone in our group.

Yet, we were nonetheless stopped by this one photographer to pose for a group shot. Everyone’s reaction was more or less how you could imagine.

People wandered off, doing their own thing with a look of disbelief saying: “Yeah, right”. Essentially, the attitude was:

Had he superimposed our faces on a cave formation, then put it on a t-shirt, keyring, magnet and mug, and sold the whole lot for $10 then…

Ok. No, I still wouldn’t buy it. But, I think it would, at least, be a more inventive approach.

With no group souvenirs in our hands, we left the first cave and made our way to the marketing wonder, Paradise cave.

From the start, it didn’t wear its name well, as we had to climb 500 stairs to get the opening. Jet lag or no, Juliana’s reaction wasn’t altogether surprising at the top:

After we caught our breath, and REM failed Juliana yet again, we all headed into the hole to see what was there:

It was massive. We followed a 1km long wooden track, which in a separate package, we learned you could walk an additional 30km afterwards. But we opted for the short version, not least of which because three of us couldn’t carry Juliana for that long, plus the guide admitted it’s a lot of a cave with one 1km not much different than the next.

Regardless, for the shorter version, I thought the formations here were already impressive:

Again, the scale doesn’t work, but the colours and shapes were really cool, some even bizarre:

As we wandered out, Juliana, who had tried to lie down on a bench in the cave, persisted on the walk, not wanting to miss a thing – and on the way out of the cave, turned to Rose (who, in her former life, was a real estate agent) and said:

“No, I don’t like it. It’s not for me. There’s no windows. I think the renovations would cost way too much”.

Tired yet amazingly lucid, Juliana made it out of the cave, into her bed, and something miraculous happened. She slept. The entire night through.

Just in time for our next stop. UNESCO heritage site – Hoi An then a quick stop to Hue before flying south to Saigon or what everyone now likes to call it: Ho Chi Minh City.