Hanoi and Ho Chi Minh City (HCMC) are, in many respects, polar opposites. First the easiest is geography: Hanoi is in the North. HCMC is in the South. Although Vietnam has no geographic divisions any longer, post WW2 (and even earlier) when someone said North or South Vietnam, it was foremost shorthand for a political system.

Hanoi was the epicentre of the Communist movement, that would later, of course, take over the whole country.

HCMC on the other hand, or Saigon as it was known until 1975, was French then American dominated.

So, each area had an entire generation (30+years – (WW2-1975) to cook under their own influences. I think HCMC had enough of an identity before being taken over by Communism from the North that it wasn’t entirely swept away by the North’s more austere values (despite it being renamed for the leader of the Vietnamese Communist movement – Ho Chi Minh).

How this played out in current terms, I think is visible from the number of Western franchises. In Hanoi (at least on our 2 day walks), small business still outweighs Western franchises, while HCMC just opened a McDonald’s.

Yes, it’s the only McDonald’s in Vietnam. But when reading it advertised in one of those free tourist weeklies (that it seems every city has) with the exclaiming headline: “McDonald’s is here!”, it sounded like a wish fulfilled.

After looking around the city filled with skyscrapers, boutique hotels, fusion restaurants, and McDonald’s close companions: Burger King, KFC, and cousin Subway, and maybe the overlord of all – Starbucks – it made sense…HCMC was wide open for business, and like a kid after watching a commercial about toys in a Happy Meal, it appeared it wanted to collect them all.

With such a range of Western choice at our fingertips, you might think we’d shirk them all, walking past with a condescending air, saying: “Pah. I want authentic. I want a cultural experience. Give me something new.”

And, you’d be right. Except for: 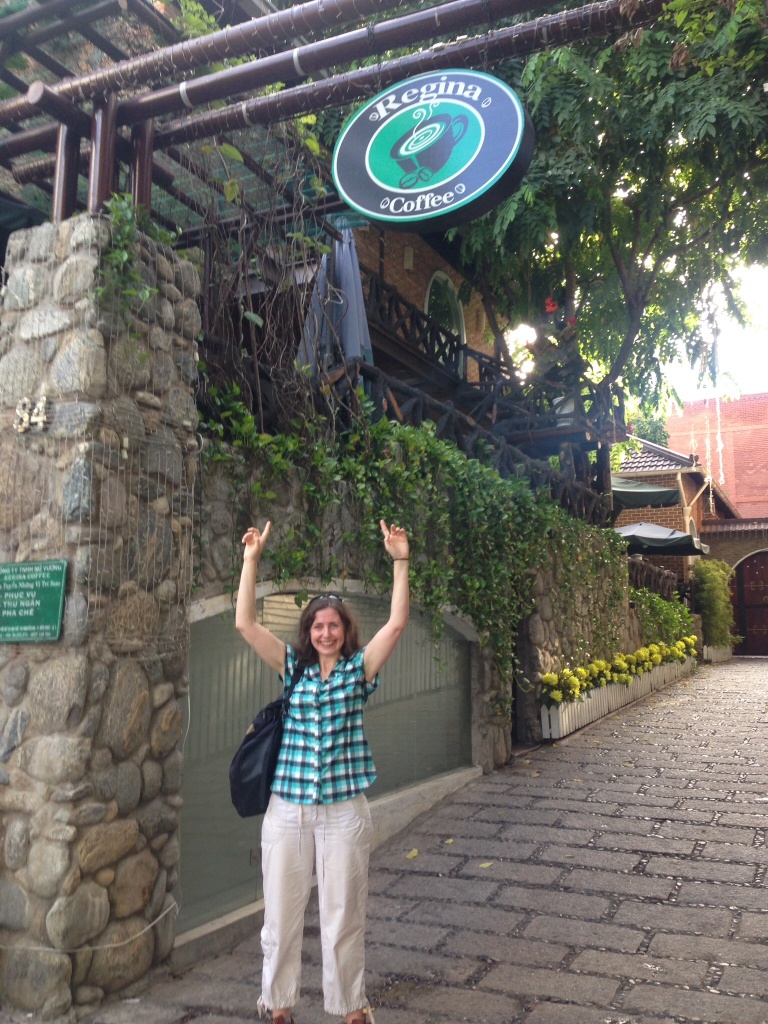 Juliana, it became clear, though tenacious on our trip so far, really only had her flag raised to half mast. Like a national economy, she was operating at a deficit. However, the good news was that it could easily be remedied – the bad news: we only found this espresso clinic, at the tail end of our trip together: 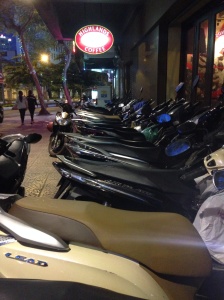 Her transformation was almost instant. Where she once had tired eyes and might have been a beat behind in conversation, by the end of her first double espresso (she had two) her eyes glittered with possibility, her speech galloped ahead of ours and she strode down the street as if she was late for an appointment. Witnessing it was like being in a room when someone turned up the dimmer as far as it could go.

Now fully charged, our Team Canada assembled with renewed vigor, stared at the floods of traffic, pouring through the streets: 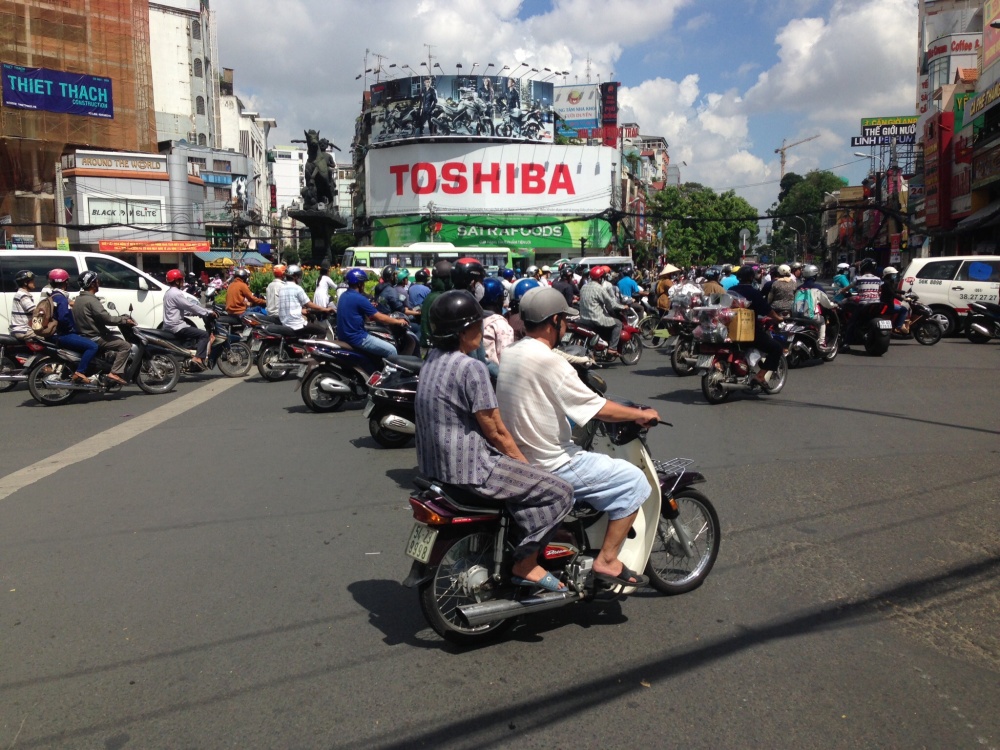 And decided, this time around, to see the city on foot, leaving the bikes behind:

Our first stop was Ben Thanh market, a huge covered building with narrow alleys between massive stalls of food, clothing, trinkets and pretty much every other imaginable souvenir: 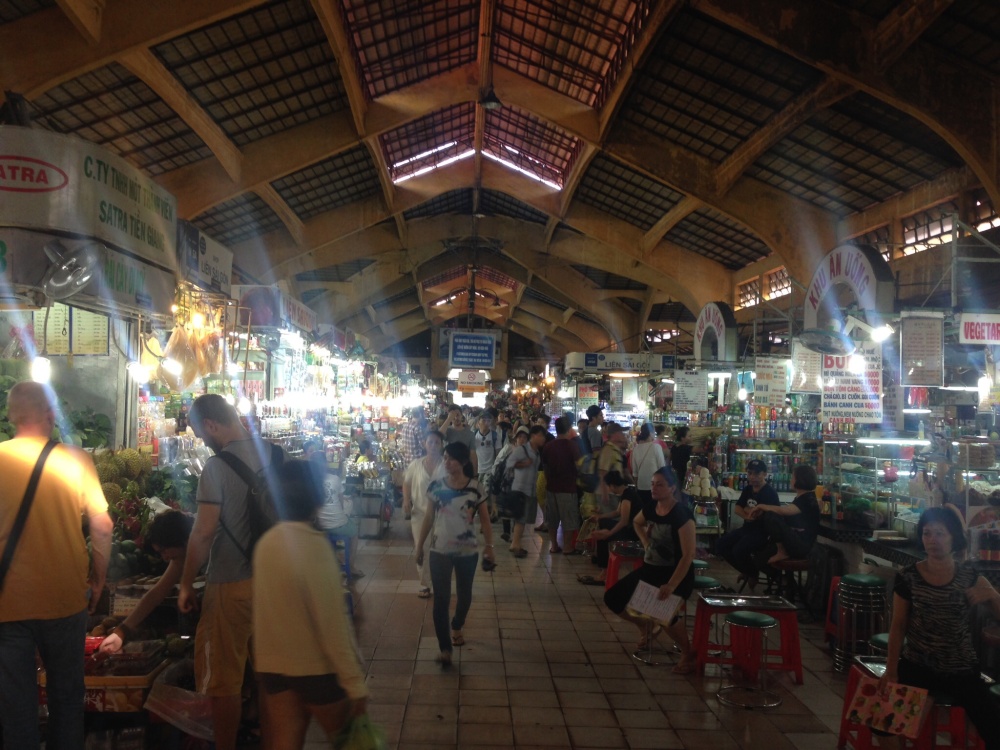 We then grabbed our thousandth bowl of Pho – (it was pretty much a once daily routine. Sometimes more), and headed to other sites we’d heard about, one being a huge remnant of French colonialism – the Notre Dame Basilica: 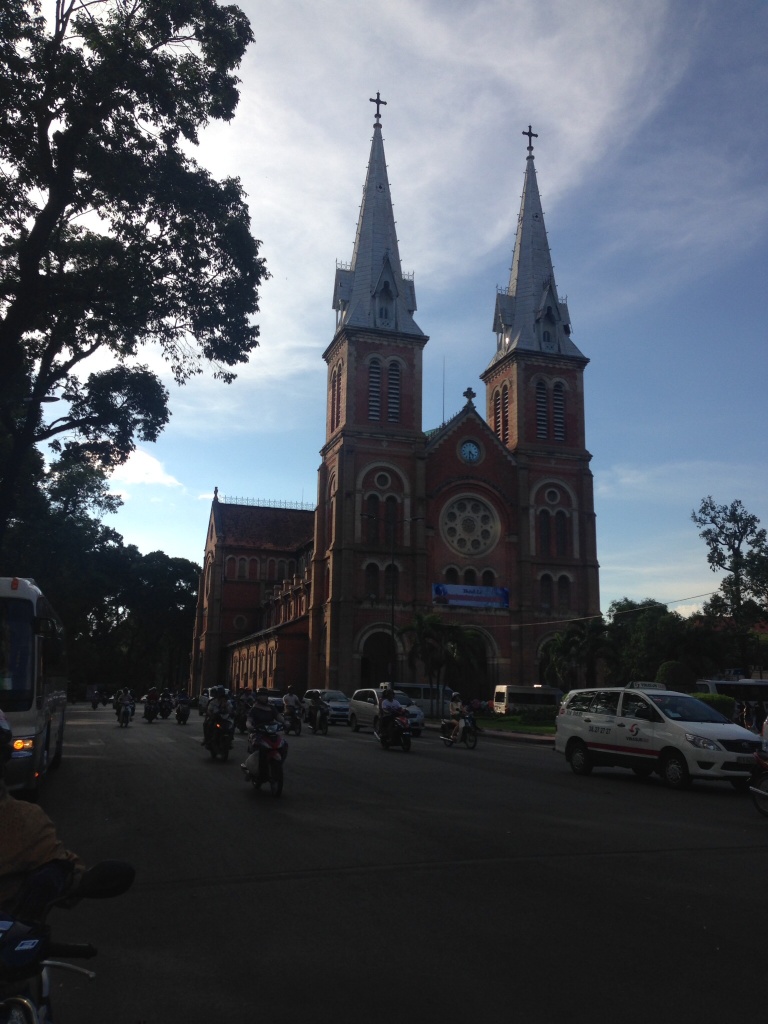 Though, strictly speaking, Communism espouses atheism – the church was in full swing when we visited with a service for the 6% Catholic population – an allowance written into the Vietnamese constitution for religious practice with the qualification (as long as it doesn’t grow too big. Translation= too influential).

Right next door was a massive post office, but mail was only the beginning. You could send faxes, parcels, pay bills, use the Internet, get writing services and, of course, buy souvenirs: 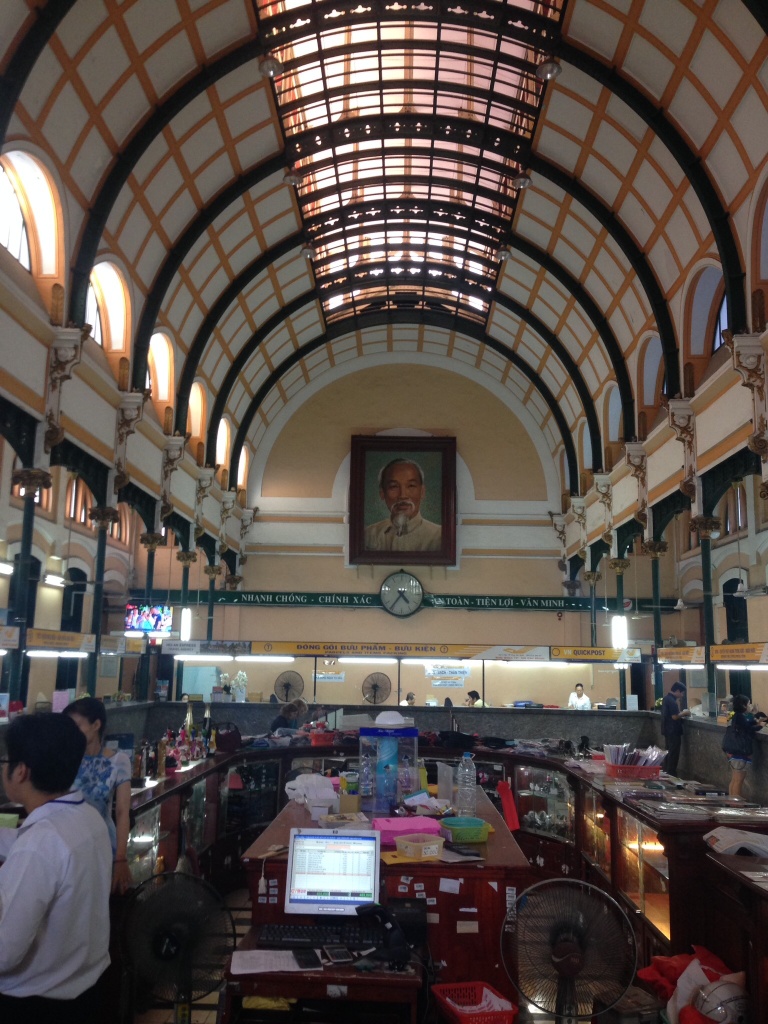 It was an interesting building, designed by Mr. Eiffel himself in the 1890s – it reminded me of a train station, which while there were no vehicles moving around, it still had an atmosphere of activity and bustle – from modem lines zinging out information to the letters getting set for flight:

Come nightfall, we strolled around some more, seeing things lit up, and walked through parks filled with people hanging out, and once again, skirted some markets:

Checking out the food for sale:

And, on the way home,  did as its done in Vietnam – walked off the sidewalk, allowing the horde to move around you:

I realize that’s my third Indiana Jones reference and video so far throughout the blog. I don’t know why, they just seem to be floating around in my head: (INNNDDDYYYYYY! COVER YA HEAAART!). And since we’re heading into the Cambodian jungle after this – I’m pretty sure it won’t be last.

In any case, that brought an end to Day one in Uncle Ho’s Southern ville.