One thing that I hadn’t fully appreciated about Vietnam was that it was at war for nearly two thirds of the 20th Century.

Starting with Communist resistance in the 1930s followed by the First Indochina war with the French in 1945, which was then carried on by the Americans until 1975.

Of all these conflicts, the Vietnam War was the one that had the biggest impact on my imagination as a kid and teenager (known by the Vietnamese as “The American War”). All largely from American films: Platoon, Rambo, Good Morning Vietnam, Casualties of War, Apocalypse now, Full Metal Jacket and Jacob’s Ladder. The list goes on.

I’ve watched them all, repeatedly. Some so much, that their plots soon became ridiculous – like Rambo. I remember watching it with my buddy, Geoff, as a kid, and there was so much mayhem and destruction, we both thought it was absurd – so we’d start tallying up how many people Sylvester Stallone had killed throughout the movie to highlight the point.

By the end, we’d have some ungainly number like: 700 deaths- completely insane. So, I was howling when Rambo’s killing spree (genocide) was lampooned by another 80’s hero: Weird Al in his classic, UHF:

Of course, as a kid, I’d watch all these war movies as a participant. I’d insert myself into the plot, imagining the fear of being a soldier, wondering if I would be able to hold up in combat. Really the only thought I had then was why are these Vietnamese killing Americans? Never considering the other perspective and maybe wondering what Americans were doing in Asia to begin with?

Only as I got older, and watched films indicting the war like Apocalypse Now and The Deer Hunter, along with documentaries and books, did I question the Vietnam War as a glamorous, heroic American pursuit, instead seeing it more as an American tragedy.

I know. Not a unique position.

Regardless, the Vietnam War occupied so much of my early ideas of war, that I really wanted to visit a major exhibit in Ho Chi Minh City: The War Remnants Museum. And the rest of Team Canada, was also game.

Interestingly, the museum was first called: Museum of Chinese and American war crimes, which, despite its subtle ring – didn’t last. The reason, like most of everything else, was money. A lot of it.

In the years after the U.S. rapprochement in 1994, the U.S. represented a massive export market for Vietnamese goods. With its former patron, the USSR, in tatters, Vietnam needed la moulah. So, a little museum name change and poof…Vietnam can now, as part of their exports, make money on t-shirts they send to the U.S with communist symbols all over it. Propaganda was now worth more outside the country.

In the courtyard of the politically correct named museum, there are American tanks, helicopters and fighter jets that Vietnam took possession of once the U.S. left the country in 1975 (I assume that’s how they came by them): 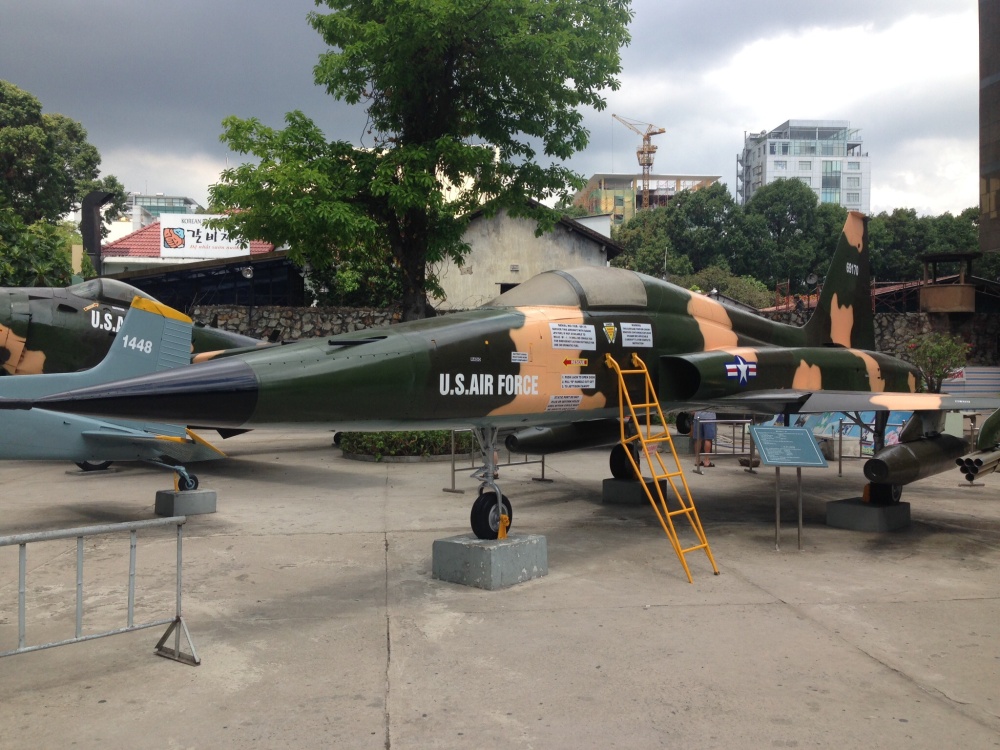 The whole thing, I thought, was really well done. No details were spared on both sides: showing harrowing, graphic shots of women, men and soldiers, and photos that defied any photo stagecraft, like a photo of a plane coming apart in mid-air, plus a duo of shots showing a soldier walking down a path, then a second photo showing an explosion in that exact place where the soldier had been a second earlier.

In these scenarios, I can only imagine photographers pointed their camera in a direction, rhymed off a few shots, hoping to capture something, and wound up with powerful images, entirely by chance.

The exhibition also included, what might be one of the most famous – the prize winning photo of a young girl, after a napalm attack:

Interestingly, the girl in the photo – Phan Thi Kim Thuc, is now a Canadian citizen. She defected in the early 90s, and is living in Ajax. You’re welcome CRTC – there’s your bit of CanCon.

Onwards from there to another exhibit, it got even more grim (which is why I didn’t take any photos a)because a photo of a photo is a bit odd b)it was one of those things I found I wanted to experience without trying to document it while it was happening).

There was a showcase of the effects of Agent Orange on the Vietnamese population, and even some offspring of American soldiers. Sad, and painful to look at.

It also included a deformed fetus in formaldehyde, which I thought was a bit ghoulish and unnecessarily heavy handed, but given the earlier name of the museum, the curators were obviously not victims of subtlety.

Afterwards, I think our whole group was reeling a little from the intensity of the whole thing, and we sauntered out to reset our mood with a bowl of Pho, and a beer.

However, it wasn’t our last War themed site. We also visited the rooftop of the Rex Hotel in downtown HCMC, which was a hangout for wartime journalists in the 60s/70s.

As we traveled our way to the top, the prices climbed with us. Out on the rooftop balcony, we each ordered a drink to linger over and take some photos of the view: 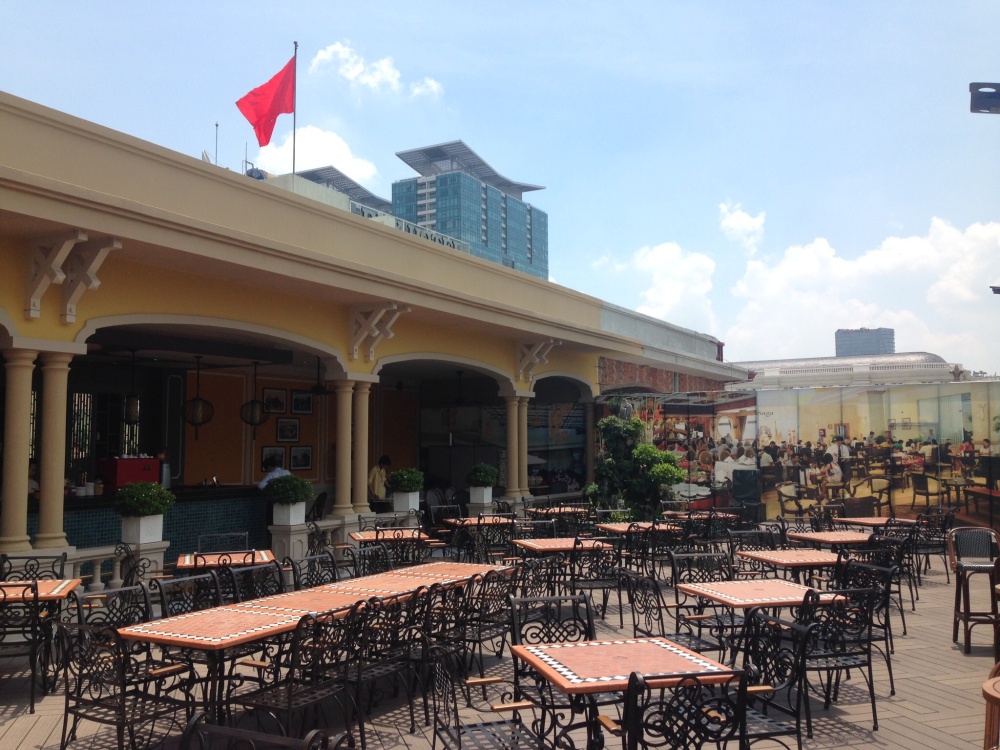 When we returned, I got the bill and realized that this thing:

Yeah, I know – not unexpected in any rooftop patio in any major city in North America. But, in Vietnam, the equivalent price for something like this (sans umbrella of course – and tasty waaaa-feer) in a restaurant on the street is closer to $1.50. La horreur!

By the time we reached the lobby, I saw the error of our ways reflected in the buildings around, which were all high end fashion brands. We’d, inadvertently, wound up in Ho ChiChi ville.

Regardless, it was a nice way to see another side of the city, which until then had been Pho joints and market food:

After a nice meal that evening, care of Matty’s kindness, we toasted our time in Vietnam, and wondered what lay ahead in Siem Reap, Cambodia. Home to Angkor, Apsara and Angelina.