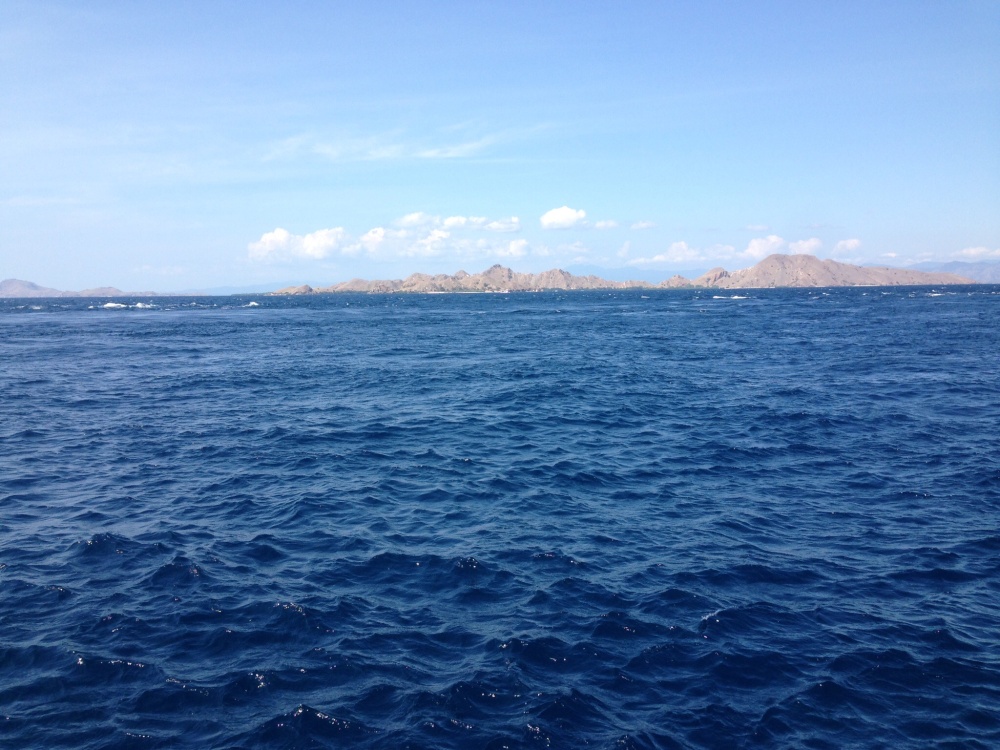 About 25 minutes into our dive, it occurred to me that I might die.

Rose and I were in the strongest current we’ve ever dived. We had been swimming upstream for what felt like 10 minutes, and we’d only moved forward about two feet.

My muscles were burning, I was sucking air as if I was running uphill on a treadmill, and noticed I only had 50 PSI left in my tank. This is the magic number at which divemasters assemble their divers to begin a safety stop (waiting three minutes at five meters to decompress), before ascending to the surface.

We were only three quarters through our dive, and at the rate I was sucking air, I was worried I’d be through it in the next five minutes.

I glanced over to Rose and she didn’t seem to be doing much better. She was struggling to move ahead, and now put her hand out to our divemaster for help.

We were swimming towards a reef, and had the open ocean behind us. If we couldn’t hold our position, we’d be whisked backwards, out of reach of the reef, into the blue where we’d be by ourselves, far off from our boat pickup spot.

With that idea turning over in my head, matched with the knowledge that other divers had been lost in the currents around Komodo National Park, and seeing Rose in trouble, I first got angry: “What the hell were we doing here? Goddamit this is ridiculous. Why did we ever get into this when we’d read these currents were strong? “.

I saw the divemaster take Rose by the hand and drag her to a rock on the sea floor, which she mimed her to hang on to.

“Shit. I don’t think I have enough strength to swim over to that rock”, I thought, recognizing it was about twenty feet away, and, for the past minute, I hadn’t made any forward progress against the unseen hurricane-like current flowing headlong over me.

My anger turned to panic. My breath quickened. I was sucking in air at twice my normal rate, which meant the time left on my air tank (that I earlier posited at around 5 minutes) would now be cut even further.

Of course, realizing this underwater only added to my fear, making the situation worse, which then gave me something more to panic about. It was a productive time. If it were an equation, it would look a little like this:

My legs now were getting weak and my jaw, which had, until now forced my teeth around my regulator with crazy glue like strength, also started to go slack.

At this point, something new occurred to me. Here it is in equation form:

Our divemaster, who had secured Rose onto a rock, looked back at me and I mimed the underwater signal, which I’m sure no divemaster wants to see – two hands around my throat to say I was out of air.

This wasn’t true, of course. I still had air, but I couldn’t summon the strength to get to it. Instead I was sucking in water – plus my mask had started to leak. Regardless, it was a game of semantics, and I got my panic across.

In the few seconds it took her to swim over, I had to fight every impulse in me that said to “Get out of the water. Surface!” and ditch the dive completely. I could do this – but it was a gamble. If I didn’t give myself a chance to decompress, and flew to the surface, I was worried I’d get “the bends” and be trading in one bad situation for another.

Although choking underwater didn’t feel like a great alternative, I stayed put long enough until our divemaster swam over, gave me her secondary regulator to breathe from and pulled me over to the rock Rose was hanging onto for our safety stop.

While her regulator helped, it was only a half-measure because I still had trouble finding the strength to bite down hard enough to keep water from getting past the regulator and then swallowing it.

I had a moment on the rock with our divemaster, doing my best underwater mimickry to explain my breaths were half-air, half-gulps of water. She encouraged me to calm down – solid advice, I thought – and I did my best to slow down my breathing. It worked for a while, as we hung on to the rock – but I was still swallowing water and it was a horrible feeling that I wanted to get away from.

Realizing the constraints we were under – i.e. going to the surface without a proper safety stop could be a problem – I looked at her through my mask and gave her the sign to surface, which she replied to at first with a sign of patience. Again, solid advice – but I was panicked, and kept signalling the surface sign. “Can we go up NOW?”, like a kid in the backseat of his parents car, asking: “Are we close NOW?”, “How about NOW?”.

After my constant nagging, we eventually surfaced, and I promptly broke the waves, burped and returned the sea I’d swallowed.

After a brief celebration, it turned out to be a small comfort. I had a chat with our divemaster, and I agreed that it was the right decision: we were going to dive again in an hour.

In truth it was the last thing I wanted to do, I would rather have stayed above the water, on board sipping hot tea with a towel around myself, soaking in some sun ala:

But, I knew, like the proverbial saying: “Get right back on a horse” – it made sense.

And, it made the difference. I was glad we got back in – because our remaining dives there were really amazing. The underwater life is so incredibly rich, it’s incredible to see.

We had nine dives in total. On our last one, we went to a spot which the majority of divemasters on board claim as their favourite – we saw an unbelievable amount of creatures, all in one place: Sea turtles and rays the size of living room carpets, white and black tip reef sharks, giant trevally bigger than the biggest size flatscreen tv, massive groupers, schools of tuna + mackerel, and barracuda. Sorry, no underwater camera, but this is the prime spot from above:

It was like the ocean had assembled a dream team for us to see. I know for divers, what’s considered “the best’ is subjective – but for both of us, it did the trick.

Of everything we saw, the strangest and most interesting was a moray eel. Old hat on most reefs where they’re ubiquitous. But this eel was out of its cave, on a hunt for food and was 10 feet long, 3 feet wide, giving it the appearance of what early sailors must have thought were sea serpents. It was flapping its body in the current like a flag, and as we passed it by, I looked behind for a last look and it bolted off in a flash, moving quickly and slithering its way back behind another reef for cover, where I could see it’s full length. It was creepy and amazing, looking a bit like a dragon in a fantasy film.

Of course, Komodo is popular for another kind of dragon, which I’ll get to in a coming post. As for our diving, my panicked, water gulping, life flashing before my eyes, what the hell are we doing here dive wouldn’t be in vain. We passed our Advanced Open Water certificate – which essentially means, we’re “qualified” to dive in harder conditions

Given our struggle, I felt we’d earned it, and while it maybe wasn’t inspiring us to rush off to the next autobahn current – it felt reassuring that we did it in Komodo, where we learned first hand and from plenty of of other more experienced divers, that the currents are some of the toughest in the world. I think we were equal parts relieved as we were happy: 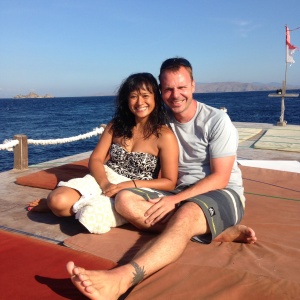 Until next time, on dry land, where we met Komodo’s namesake face to face, staring it in the eye as it fiercely, ferociously…napped.