It took only five minutes for this guy to show up after we’d arrived on his island. Amazingly that turned out to be the least dangerous part of our trip.

Some quick geography: Komodo National Park – as you may have guessed from its leading title – is where you will find Komodo dragons. They live on a few islands within the designated area of the park (the green):

Currently there is no place for tourists to stay on any of them, which is why many people fly into Labuan Bajo on Flores island- a growing hub where tourists can sleep and eat (Red “A” above). Here’s a shot of the harbour from the place we stayed:

Interestingly, Komodo dragons can also be found in a few pockets on Flores, however, for whatever reason (small numbers maybe?) they are not for tourists’ cameras.

As a launching point into Komodo National Park, many of the tour operators in Labuan Bajo opt to go to Rinca island to view the dragons. Mainly this is because it’s closer than Komodo island – about 1.5hrs versus 2hrs+ and apparently also better for sightings.

But to see them, you have to get there. And this is how we were going to do it: 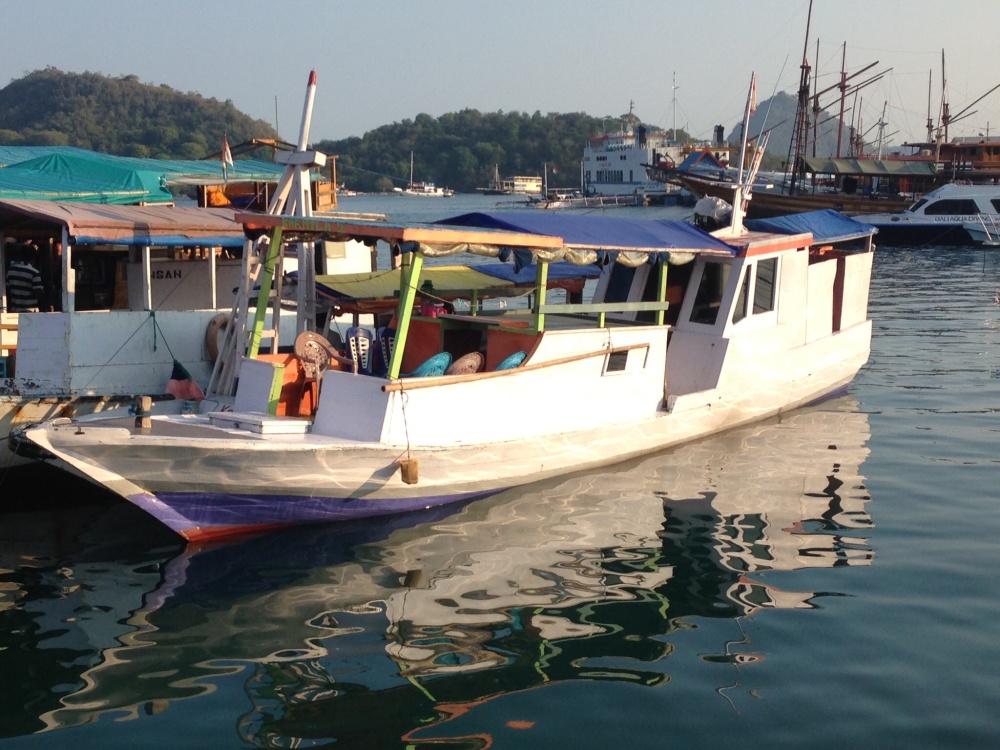 From that angle, it looks like a quaint little fishing boat that may stir romantic visions of the little engine that could. However, from the angle of sitting on its deck, I can vouch it very nearly couldn’t.

It was a sold out tour. Great news for the operator, however, for us, the tourists, it became a perilous seesaw of concern, which began with our chairs. There were 11 of us, and 8 chairs. Three people hopped on top of the engine hold to lie down, while the rest of us took our place on deck.

Now you might imagine how lucky we were to have a seat. And, you would be right, had they not been tiny lawn chairs made of such low grade plastic they could only bear the bum and weight of a small garden gnome. The other possibility is that the engineers had intended them to be objet d’arts, not meant for people to sit on.

When I did, the four legs splayed out like a baby deer slipping on ice. As the chair buckled, I had to adjust my weight on it to get the legs up again to a normal point. At first I thought I was the problem, then hearing another guy on board declare: “Aaaahhh!”, and seeing him do the same thing, I was convinced if I lifted the chair I’d find the name: “MATTELL” stamped on it.

I wanted to look under the seat to see where they were made, but that was the other problem: everyone’s knees were touching everyone else’s and a slight adjustment in weight might crunch the legs down again.

I summed it up as a mislaid shipment of Barbie chairs, and hoped for better things to come.

But they didn’t – at least for the duration of our boat trip there. Another quirk of the ship was that it rocked back and forth without any help from a wave. Rose and I were sitting next to each other, and as the boat tilted backwards, our chairs slid until they hit the wood frame of the boat with a sound: SHHHTTT (which, coincidentally, sounded a lot like the word we were repeating in our mind).

Now the same thing the other way: we go forward and have to hang on to the side so that we don’t slide into the two people facing us.

As we picked up speed, the rhythm did as well going back and forth: SHHHHTT. SHHTTT.

I looked over at a pair of other tourists across from us and noticed, after every bump, one guy would put his hat over his face in a mix of fear and anger, while his friend joked with me:

“After this, the dragons will be pussycats”.

I felt a little more resigned, partly because the other problem was that there were no life vests for anyone. If we went over, we had to swim for it, and I was genuinely prepared, just hoping we’d fall out near enough an island that we didn’t have to swim too much.

I asked Rose: “If this goes down, do you think they’ll count us as dragon fatalities”.

And so it went. We bobbed and weaved our way along – thankfully without a wave in sight, and approached the dragon’s lair:

After arriving at the visitor center within five minutes, we spotted one that snuck out from under the building next door (same one as very top pic).

Our guide motioned us to step back, which I was happy to do – because I’d filled my head with Komodo dragon facts before visiting and knew they were incredibly fast plus their saliva was an issue. The popular finding was that their saliva was septic, which meant if they bit you it wouldn’t heal easily. However, this was being debated by some scientists who now think the saliva may be venomous.

Either way it’s bad. And, they are willing to give it a try – a group of divers who got lost in a current here in 2008, washed up on Rinca island, and for three days, fought off dragons as they approached until they were found by a rescue team.

Plus, there was another story of a tourist who wandered off by himself, and that was that. Whether this is meant to scare tourists to stay close to their tour guide, who knows – but it wasn’t something I was going to test.

However, for our stroll, they had plenty of their main food sources on hand that are also island residents like deer:

We were told this guy is getting old, and weaker, and will invariably end up in another dragon’s stomach. The same goes for their own kin. We spotted this one at the beginning of our trek:

And, it was explained that dragons have no maternal instincts. Once they give birth, the baby is on their own to fend for itself, and if it’s not fending well enough – it’s open game for Mum to snack away.

It was hyper-Darwinism. Ayn Rand would have loved it here.

Me, not as much. The more we walked, the more it sunk in why there aren’t any tourist spots here – the place is blighted. Not merely from a smaller version of a Tyrannosaurus Rex scampering around or three highly venomous snakes, including a spitting cobra, waiting to emerge at night to hunt, but even the palm trees aren’t inviting spots to sit below and daydream:

And, amazingly, even these hardy, daggered palms are no match for another tree, which we spotted a few times along our trek that had wrapped itself around a palm as a parasite, slowly killing it.

Now factor in the heat, sand under your feet with these towering trees overlooking your path: 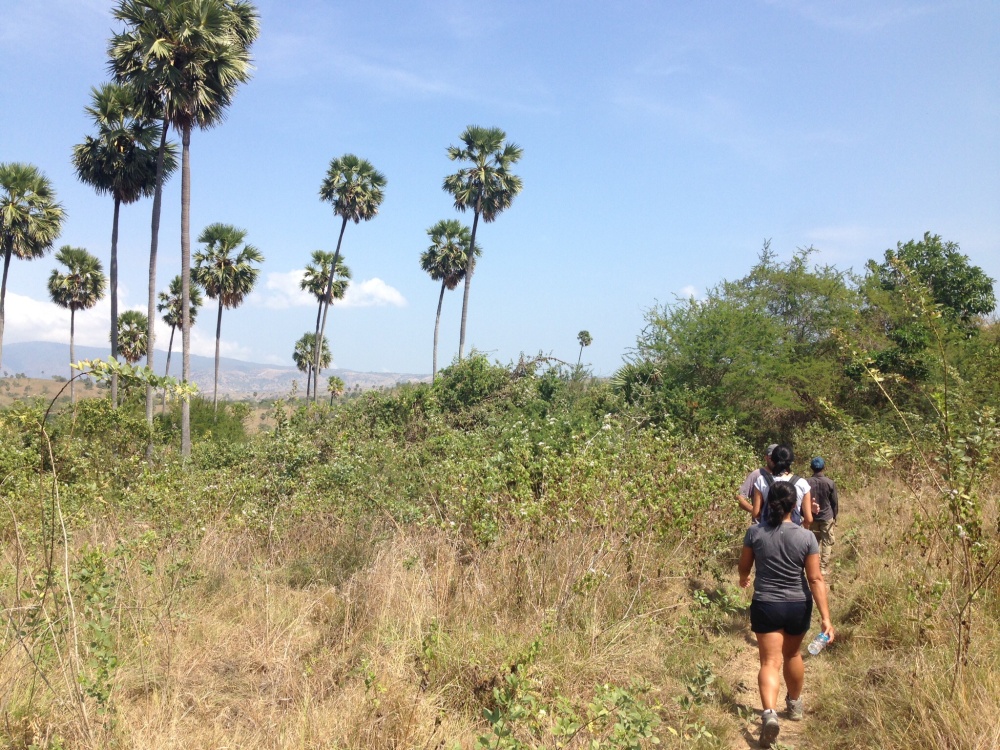 And, I preferred my chances on our rocking boat.

Interestingly, Komodo Island, was used as the basis for Skull island in the film King Kong. While we were on Rinca nearby, its topography and wildlife I think is fairly similar.

As the story goes, a wealthy New York adventurer in 1920s was commissioned by the Bronx Zoo to retrieve live samples of Komodo dragons. He went by ship, detailing his journey and the strange wildlife he saw – brought back two live dragons for the zoo (which unfortunately, but not surprisingly died shortly after), and wrote a script which he later tried to sell.

He was friends with the director of King Kong who used his story as the basis for King Kong. The director added “King”, which the New Yorker had used in his story by referring to the dragons as: “King Komodos”. Plus for the story itself of someone going to a remote island to retrieve a whispered about species, the director swapped out Komodo dragons for a mongo ape including using ” Ko” from “Komodo” to use as “Kong”. Anyhow, a little tidbit that added an undertone of strangeness to our walk.

We didn’t spot any more dragons on our walk – which seemed preordained as our guide instructed us point blank: “Take all your photos here. We might not see any dragons later on.”, as we found this guy lolling about, in front of the kitchen only a few minutes after spotting the other one at the visitor center.

In any case, it was our first introduction to Komodo (we dived the following the day). Interestingly, in retrospect, its tough, unforgiving nature on land turned out to be foreshadowing for what we would also find below the water (see last post).

Next stop, our next Indonesian island – Lombok, directly East of Bali. With no flights from Labuan Bajo we had only one option: Ferry + Bus + Bus + Ferry + Bus + Taxi = What time is it?