Early the next morning we set out for the next village – Tal – in one basic, ongoing direction – up. Thakur, our guide, seeing us labouring uphills as we went, kept insisting it was okay we took a slow pace. “BISTARI BISTARI JAM”, was his ongoing refrain. Nepalese for “We go slow”. (It was only after we’d completed the trek when we asked him if we were the slowest people he’d had. “YES!”, he said, without wasting a breath).

After lunch the previous day, we started trekking with two Australian sisters. At the time, they had been going the same pace as the blunt-headed arrogant guy from Day 1, and I think were looking for a way out. They weren’t the only one. The guy had hired a guide to help him along the way with the route, and as he kept up his extraordinary demands to cover more ground, we’d watch his guide roll his eyes and purse his lips, before explaining a more moderate course.

Regardless of what course they chose, the blunt-headed guy wanted to get moving quickly – and so seeing an opportunity, the four of us stayed behind at lunch to allow them to conquer the trail at warp speed.

The sisters, whose names Thakur would pronounce as Makala (Michaela) and Saree (Shari) (which Rose and I would also occasionally address them as for fun) were first-time, never trekked in their life, let’s take this slow, kind of people – which, I think made a good fit with our “what-the-hell-did-we-get-ourselves-into” approach.

It was a match.

We ambled into our lunch spot, legs burning, exhausted, and watched some more goats click by:

As we gorged on the Nepalese staple – Momos – similar to a Chinese dumpling, we then stared at the gorge that awaited us after lunch:

It became a running joke: we’d frequently ask Thakur during a break on the trail or before we left off after a meal: “So, is it more up today. Or flat? Maybe down?” and every time, when it was bad news, he’d say it emphatically, with not a grain of sugar coating: “UP”. (which, of course is the general direction of the entire trek until about the tenth day when things come down the other side of the mountain. But we’d ask for what lay ahead of us in the next two hours – as the trail did go up and down).

Despite knowing what lay ahead, Rose put on a good face and we headed off: 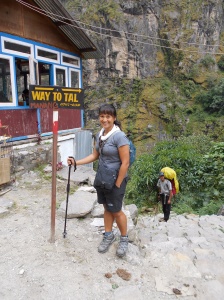 One thing that kept me motivated to keep going was that I’d noticed : “Fields of Marijuana” (see the map above) was specified on the route on our way there. Fields? As in Cheech and Chong fields? While they weren’t the prairie fields that I’d imagined, there they were, dotting our route:

“Ganja is Nepali word”, Thakur tells us. Immediately I hear the Peter Tosh lyric in my head: “Sum a dem call it ganja!” Until 1973 it was legal to sell in Nepal. I can’t help think this was a big attraction for hippies who came here in the 60s, and helped add to Nepal’s image as a “peaceful” place where one can reflect on life, without having to take the Buddhist path (also an option in Nepal), which could mean sitting in a cold room, on a stone floor repeating a mantra in your head. Instead, people could smoke a joint and stare at a waterfall and let ideas flow.

Today, there is an illegal trade, mainly with Northern India – though, we had seen bags and clothes made from hemp, so it seems it might not all be used for personal prescriptions. Though we’d meet a group on the following day who were fully committed to that path. After the marijuana patch, the next big highlight on the map was something called “A Long Hot Climb”. An attraction no one was quite as excited about. We passed it by Thakur: “So, this long hot climb. How long? How hot?” “No. Different path. Ours is another one”. We each breathed a sigh of relief, but it was only a single breath. Quickly we realized we were heading upwards on our own version of a climb.

While unfortunately it wasn’t enough to warrant its own call out on a map, something like: “Hot and pretty friggin steep climb”, or “Seemingly neverending toil uphill”, it was enough that after we reached the welcome gates of the new village, Tal, we each celebrated in our own way: Makala and Saree calmly but with a twinge of exhaustion: “Is that it then? That’s the village?” and Rose, upon seeing the village, just slightly, every so slightly, more directly: “THANK FUCKING GOD!”. 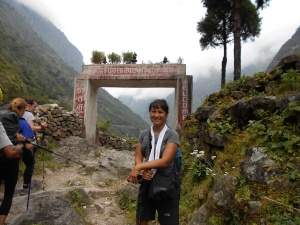 The village was one of the first Buddhist villages we visited, showcased by a set of prayer wheels that lay in the middle of it. According to Buddhist tradition, you are meant to walk on the left side of the wheels so you can spin each one clockwise (to symbolize time as being circular). This one had 108 wheels, which is also the number of beads that the Buddhists in Nepal carry with them – a sacred number that I couldn’t get a clear answer on while we were there. Why not 107 or 109?

From what I’ve read it could be related to 108 statements that Buddha promulgated or 108 questions asked to Buddha – basically, I’m not entirely clear. But there they were, and we witnessed a woman who was walking around both sides of the wheels, making sure to spin each one as she also counted the beads in her hands.

As we’d walk by, Thakur, who is Hindu, would spin them and hum a Buddhist mantra: OM MANI PADME HUM, as he went. When we hit hard uphills after this, I thought if Thakur was willing to share in some Buddhist rituals as a Hindu, I was willing to take it on as an honourary member and would chant the mantra in my head to distract focus from my burning muscles.

But Tal would be the ultimate distraction for our sore muscles as it would be our stop for tonight, giving us time to do it all again tomorrow.