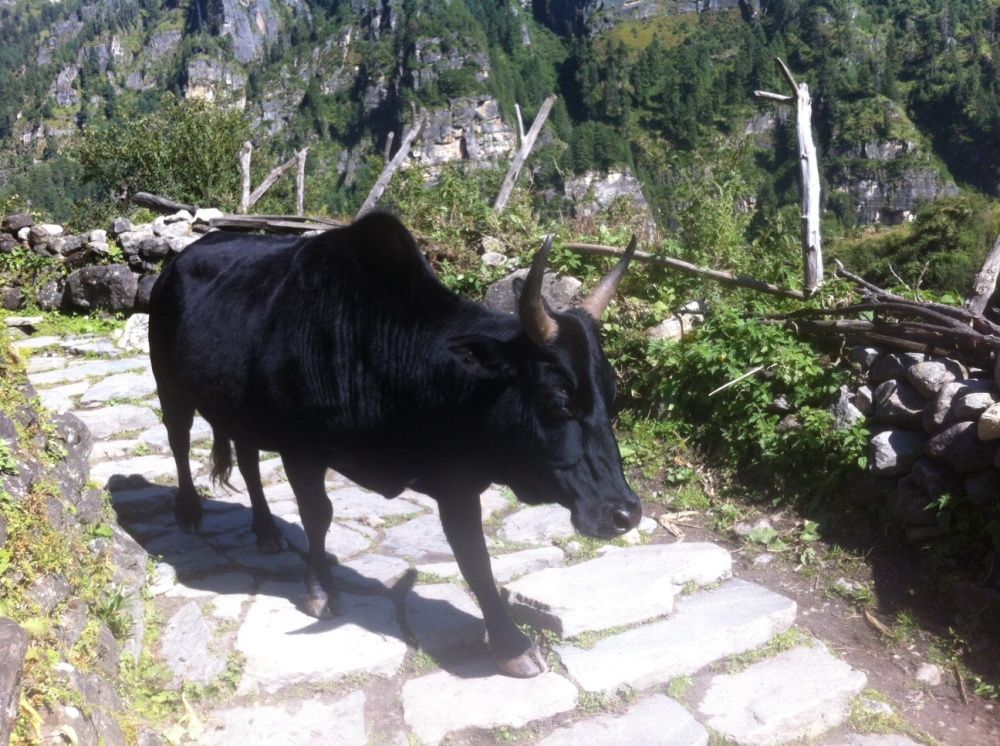 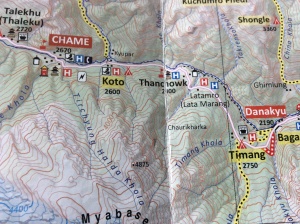 “TO THE LEFT!”, Thakur shakes his walking stick at us, urging us to move towards the stone wall and make way for the oncoming herd (one of which you can see above). Good news: we all quickly shove aside safely. Bad news: my hand now feels like it’s submerged in boiling water. In my surge to the left, I’d also grabbed a leaf on the wall, which, according to my luck, happened to be stinging nettle.

I never thought about this plant in my life, and hence never doubted its name. But I can vouch, in this instant, the botanist(s) who named it were really on the money.

And, in truth, it also feels like a scolding. I thought I was pretty agile getting out of the way, and briefly saw myself not doing too badly at the Running of the Bulls. Now with my fiery hand, it’s a burning reminder, that I’m probably (and really quite literally) overreaching.

Thakur, however, has a remedy. It’s the plant growing right next to the stinging nettle, which he explains is the antidote to the burning effects of its next door neighbour. Sure enough, after he rubs this second plant’s leaves all over my hand, it numbs the burning, allowing me to focus on other things apart from the pain like, when exactly is the Running of the Bulls?

Thankfully, that would be the only incident of the day. We didn’t have the same taxing time of the day before, as the route was flat for once, with nary a big incline in sight. So, we took our time, stopping on the way to have what the Annapurna Circuit is also known for – apples (straight ahead behind my bag): 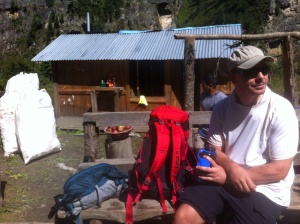 We later ran into someone else on the Circuit, who, after eating one piece of apple pie after another along the route, said that it was like “An apple-pie trek”, and got excited about his expression. The truth is many other clever minds had beaten him to it: and the Circuit has had the slogan for a while – funnily enough, we did see this trekker after we’d both completed the Circuit, and he explained that he laughed after getting online, seeing that his tagline had already been enjoying a long life.

Before we wound up our day, we ran into some more animaux, strutting along, on their way to a village farther down, maybe to carry more riders uphill?:

We rolled into Chame, our final stop for the day, at around noon. It was a built in rest day (half-day) for us, which didn’t work for others who we’d been trekking with and were on a tighter schedule. So they pushed on as they saw us drift off in to our guesthouse where we hung some laundry, then plopped down outside, unapologetically, for an afternoon nap.

Afterwards, Rose and I strolled the village, visiting a Gompa (Buddhist shrine) which had a single, massive prayer wheel inside: 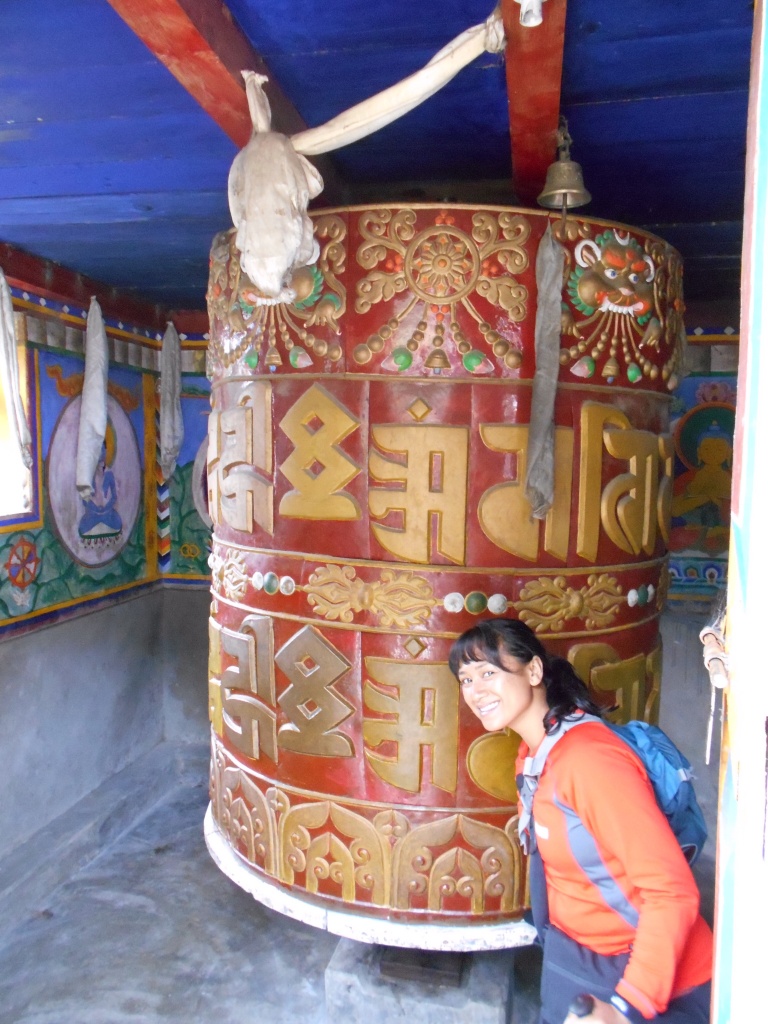 On our way back, we passed more prayer wheels in the middle of the village, plus had a run-in with a young, but determined motorcycle gang:

We were now firmly in a Buddhist region and would see prayer wheels and flags everywhere, including in our next stop, Upper Pisang, where I also sat in on a Buddhist ritual, and Rose had a brush with the effects of high altitude.

By looking at the adjacent map, and from the name of the village to which we were headed, you can guess what general direction we were headed in today. It also marked a milestone of sorts: we’d be cracking 3,000meters (9,800feet) for the first time. While altitude sickness can hit at a lower altitude, with our highest altitude of the entire trek at 5416, after today it would mean we we’d be just passed halfway there.

To underline the point, and as inspiration for our day’s journey, we had an early morning view of Annapurna 2 mountain (I think), peeking over the ridge ahead of us, as we set out: 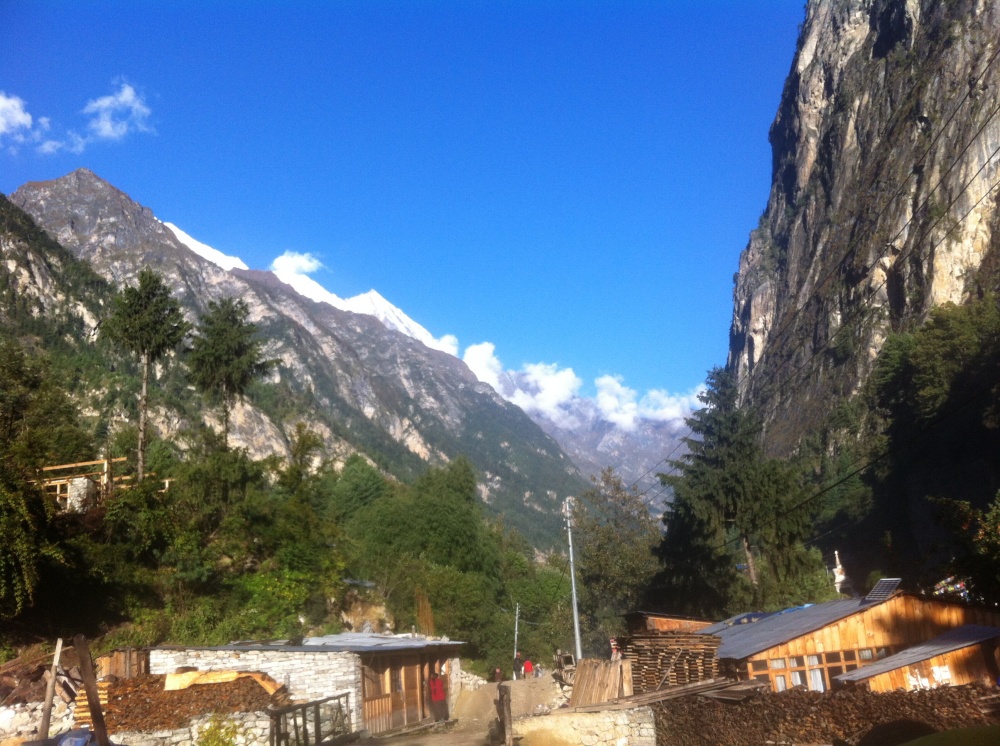 We moved through forest for a little bit, until we emerged onto a new road that had recently been carved out of the side of the hills with the help of some well placed dynamite. This was a common gripe for trekkers on the Circuit, many feeling the road diminished the experience of walking through Nepal. While I would later agree: after walking on the road, eating dust from passing buses and jeeps, I didn’t find it a big deal on this particular stretch, where occassional motorbikes passed without much dust in their wake, and the views remained incredible:

On the mountain ahead, we also began to see the effects of altitude. The reduced oxygen at higher altitude created a horizontal border where you could see where the trees stopped growing, and alpine plants like lichen and moss, that could get by on less oxygen, took their place:

Unfortunately, Rose also began to FEEL the effects of altitude. She started getting a headache about halfway through our walk, which got progressively worse the higher up we went. I got nervous about it (no surprise), but I later learned in these situations, hitting the holy shit button was still pre-emptive. The effects of altitude have a sliding scale of severity – apparently, most people will experience a headache of one sort or another on their way up: what’s most important is to see whether the headache goes away or gets worse, leading to nausea. If it hangs around or gets worse, the general rule is to go down in altitude to readjust your body before going up again.

While Rose admitted her head felt like it was in a vice, it was still too early to make a call of what to do next. Thakur recommended she take a Tylenol, and see where things stood after that. We eventually made our destination for the day: Upper Pisang, which, to me, was one of the big highlights of the trip. It looked a bit like a medieval village:

something that you’d see in a Lord of the Rings film or Game of Thrones (I haven’t seen the show, though Makala and Saree suggested it worked):

As Rose got drugged and had a quick nap, I explored a Buddhist gompa at the top of the village. After a burning hand the day before, my luck now appeared to have changed, because the monks were conducting a ceremony and inviting guests in to watch. I had no idea what was happening, but watched the Lama recite Buddhist verses as other monks chanted, and a musical section blew through massive horns.

While this was happening another monk walked around with a bowl of popcorn and other treats, offering visitors a snack. The whole thing struck me as a great, informal approach to worship/devotion: much different than some of the more pious, somber rituals I’d cringed through in Anglican Church.

Nevertheless, I didn’t go quite as far in my exaltation as some other Western tourists, whom were sitting, cross-legged in what I suppose was a meditation pose, and after the monks had finished a particular chant, opened their eyes, looked over to Makala and said: “Wow. Can you feel the energy?”.

Though, I didn’t hear it first hand, I’d thought if someone had said it to me, I would have liked to reply: “Oh, didn’t mean to disturb. That’s the lentils I just had for lunch. Sorry about that”

In any case, thankfully their were no more disturbances on our side, as Rose’s headache cleared up by morning, coinciding with another peek at Annapurna 2 peak (again, I think) looking over at us, as we got ready for our next push to the village of Nawal, on the other side of the mountain.