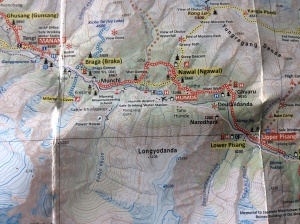 Rejuvenated and headache free, Rose and I set off en route to our next village stop, Nawal. This meant climbing once again, but not at the same steep rate we had the day before.

In fact things started off nice and easy. The terrain was flat as we wandered through a forest, with mountains on either side. It felt a little bit like hiking in Alberta. While it was peaceful, and easy going at first, my mind in its overactive imagination having made a link to Alberta, decided it should make things more exciting. Rather than keep the experience simple and leave it at enjoying mountain views in the tranquility of a forest, I thought about danger, calamity, what kinds of perils can you find in the forests of Alberta? Two seconds later, the answer was clear: grizzlies. Teeth, claws, the ability to snap our bones and eat us for breakfast, the entire malicious picture had formed in my mind.

With this new image in mind, I became vigilant, remembering something from a previous village where I’d seen a poster of a bear as one of the animals that live in this area. They were out here, I was convinced.

Inevitably, I heard a sound. A rustling to our left behind a tree. It was loud enough that everyone looked, but I was the only one who loudly said: “Jesus Christ” and moved back as I pointed at the animal.

It was big and dark and was slowly snacking away on something hidden behind the tree. In the previous village we’d seen a poster for a missing hiker, and I was sure we’d just found him.

As I backed up on the trail pointing, I was pretty sure I knew what the animal was and before I prepared to run I confirmed: “A bear?”.

Thakur, looked around and laughed, and Makala and Saree did the same.

Oh-kay, false alarm. We were safe.

However, any image of me as a rugged Canadian in the eyes of the Australian sisters died on site. Really it was only a matter of time. And, in truth, I’m not sure it had formed at all.

After bypassing the dangers of a rogue vegetarian beast, we came upon a mani wall (the image above) – which is a Buddhist prayer wall that contained a bunch of stones inscribed with various Buddhist chants/prayers: 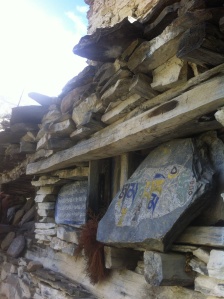 It was aptly placed, because above us was a 300 metre, steep climb – and we’d need all the help we could get.

It was a trudge uphill, which we carried on for 1hr30 as other hikers passed us in half the time. Hearty we were not. However, at the top, all was forgiven as the views were amazing and our grumpiness was soon overtaken by huge helpings of dal bhat. 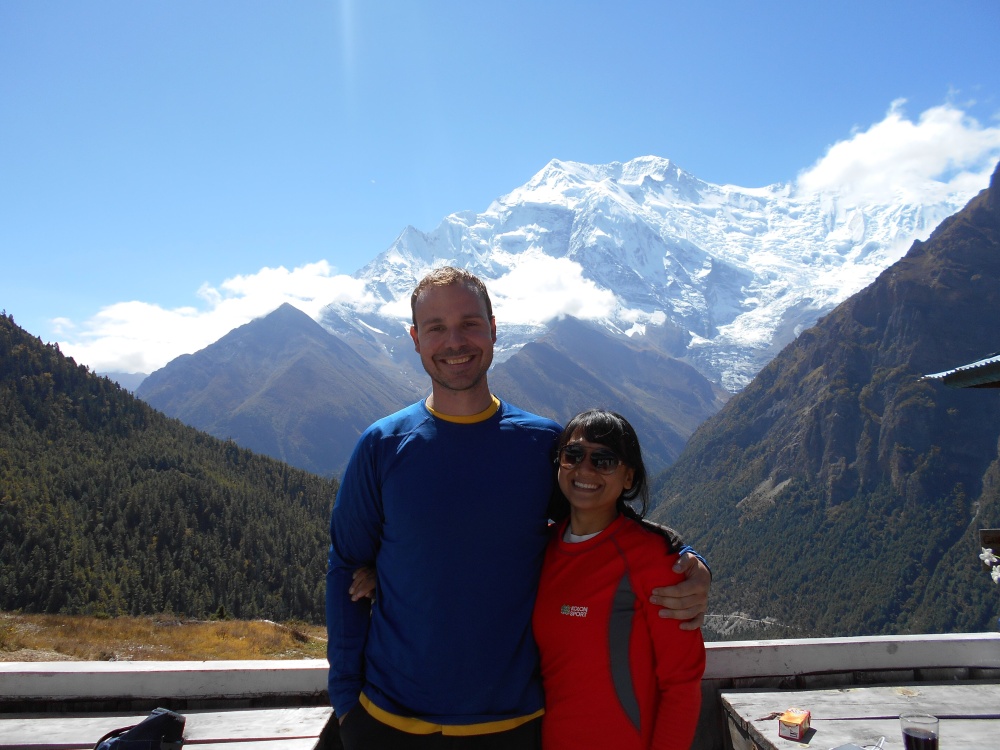 After lunch we ran into a little boy on the road, who sang the refrain of all little children we met on the trail: “SWEETS! CHOCOLATE! SCHOOL PEN!”. 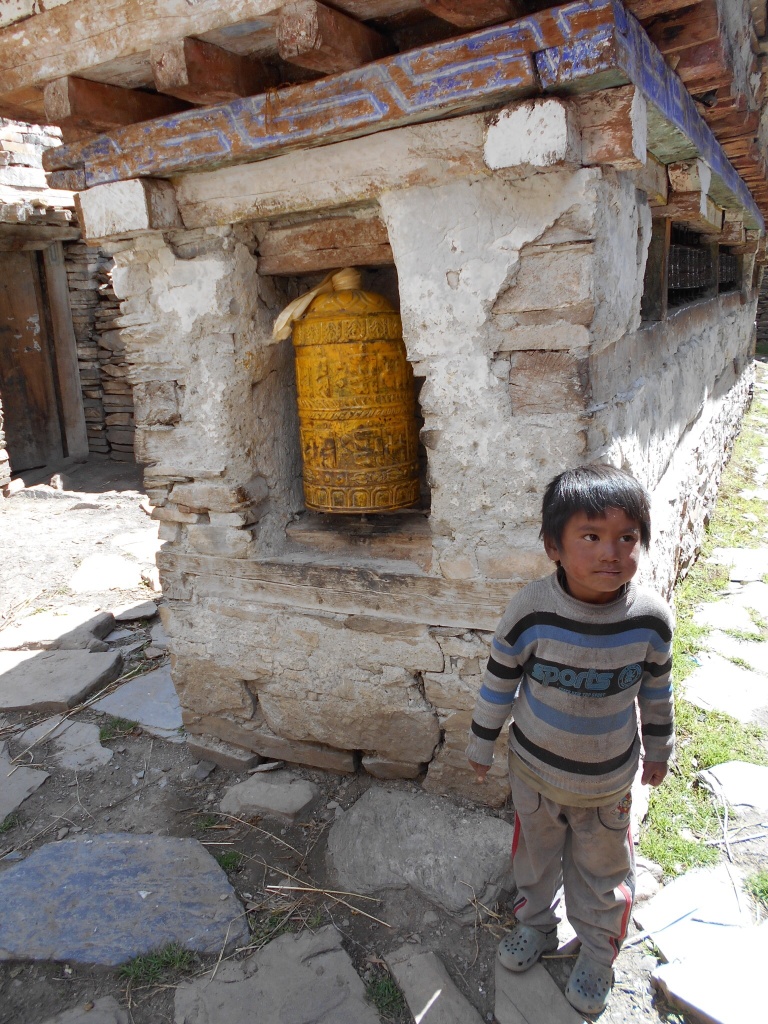 Of that combination, a lot of well-meaning trekkers opt for giving kids a school pen, thinking in their minds that they’re contributing to the educational development of an impoverished nation. While a noble thought, the reality was much different, as we learned that many of the kids would take the pens to sell back to trekkers after which they’d likely spend the money on sweets or would take the pen and barter it for sweets between friends. So, really – all paths led to candy – and since we didn’t have any, we met a fair chunk of pouty kids who were happy to see us go.

And yet, reading blogs and hearing other trekkers suggesting to give kids toothbrushes and toothpaste when asked for candy, I felt we were better off dealing with kids’ disappointment from us not having anything rather than kids’ anger from being patronized by an adult. I remember despising adults on Halloween who handed out apples, in what I took to be a self-satisfied way – “I will not contribute to the degradation of bad teeth”. So, pouty faces it was.

Nawal lay around this corner:

Once we passed, we came across another animal I’d been waiting to see, while not as vicious as a grizzly, it could do definitely do damage if bothered:

As we saw these two milling about, Thakur, made yak noises at them. I followed his lead and did my best impression. Right after I did it, a much crisper version bellowed out from above us on the trail. We ran.

After turning around, we saw that a yak had been sitting above us on the trail, and based on the strangled sounds I made, we may have narrowly avoided a mating charge. Travellers are always hearkening for an authentic experience, so at very least I could bring that to the table with fellow travellers:

“We just trekked the Annapurna Circuit, stayed in local guesthouses, ate and drank local food, and sat on squat toilets in the middle of frigid nights”, fellow trekker.

“Yeah, I did that. Plus was sexually assaulted by a Nepalese yak”,

“Given its size, it was an amazingly tender experience”.

Our narrow miss brought us into the village of Nawal where we stayed for the night:

We did a quick tour, and found the now obligatory gompa, prayer wheels, and this massive tree growing around a cement stupa, adjacent to the gompa:

I think we were in bed at 730 again – next stop Manang for a two day rest to get used to even higher altitude. 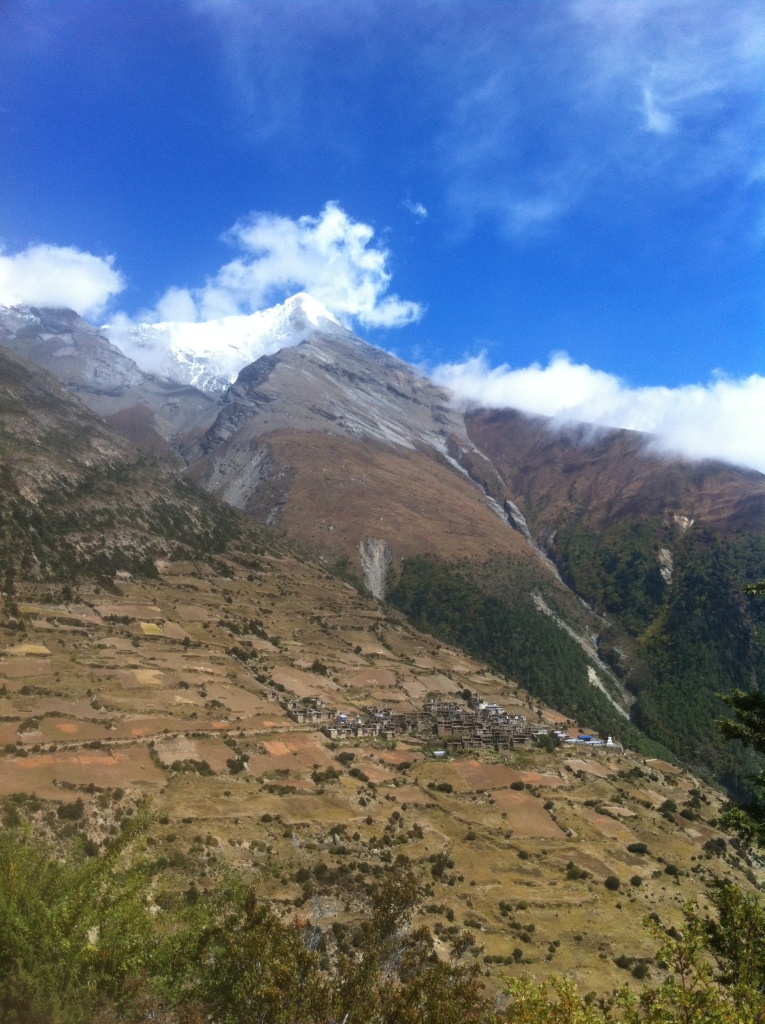 This was one of the easiest days we had. Looking back at Nawal (picture above), we headed to Manang, across more or less flat trail, with more mountain views:

And, a lot more yaks (I left the yak calls to Thakur. I trusted he knew how not to send mixed messages.)

We rolled in around midday after an apple pie in the village beforehand, and came upon Manang, which we quickly saw was a massive waiting room. All trekkers spend two days here to acclimatize to high altitude, which means down time, and a lot of people. There were makeshift movie houses showing Himalayan related films like: Seven years in Tibet and Kundun plus more cafes, where even at 3500metres, deprived Western travellers could enjoy “freshly” ground espresso.

There was also a medical clinic that offered a free lecture on altitude sickness, and the symptoms one could expect. We sat in and took an oxygen saturation test, which measures how much oxygen your body is currently absorbing. Apparently a rate of 85% was average. Rose went first at 88%, and I came up with the same. While it felt a bit reassuring, we were also told the results weren’t proven measures against getting sick – only guidelines. In other words, not to worry, we could still get sick.

We spent two days here catching up on laundry, did a bit of climbing around the place, including passing a glacial lake (the colour of the river next to yaks above), which again, I found reminiscent of Alberta (Banff).

And, I even wrote postcards to my family (any sign, anyone?).

Now the trek had entered the big point which we’d, in many ways, been training for in that we’d been ascending at a slow pace to acclimatize. The next stretch would take us to Thorung High Camp, the highest altitude at which we’d sleep, followed by the big trek over the mountain at the highest altitude we’d experience – 5416metres – through Thorung La Pass. Now, tragically, the site of where the avalanche struck five days after we passed.

Next stop the BIG climb.

PS. We’re having issues transferring photos of a camera and there may be a slight lag in getting to the next instalment. Instead, I may jump to Thailand, and then jump back. On va voir.