On our way in to Chiang Mai, and even beforehand further South in Thailand, we passed tons of elephants on posters, artwork, keychains, t-shirts, and every imaginable bauble and trinket.

Now we were going to meet the real thing. An event that in 1850 wouldn’t be cause for excitement as there was an estimated 100,000 domesticated grey, wrinkled beasts around at that time. Today, however, there are more images of elephants in Thailand than elephants themselves.

Current estimates peg domesticated Thai elephants at around 3000, and wild elephants between 2000-3000. Like most stories of environmental degradation, we’re largely responsible: from population expansion, which decreased the elephants’ natural habitat, plus our appetite for ivory, which not only played its part on pianos until the early 80s, but was used as source material for sculptures made in the Far East (Japan and China). And still drives illegal trade today.

Another factor in Thailand was war. Minefields line the Southeastern Thai-Burmese border plus there’s still a large amount of unexploded bombs from the American/Vietnam war on Thai’s opposite border with Laos. All of this spells bad things for big beasts lumbering around looking for food, oblivious to politics and national borders.

In 1989, the Thai government, recognizing the rapid destruction of their own forests, banned any further logging. The practice was dominated by domesticated elephants that were trained, in a stroke of irony, to clear land (their own natural habitat) for human development. The result was that thousands of domesticated elephants no longer had a purpose – and being domesticated meant they were no longer wild enough to roam freely and survive on their own.

For villagers who owned the elephants, this was a problem. Elephants can eat up to 150kg a day and drink 100-150 litres. Without the revenue they were getting from renting out their elephants as de facto Tonka trucks, excavating land and throwing trees around, it would cost them thousands of extra dollars a year to keep them alive.

To make up the difference, many villagers rented out their elephants to tourist outfits or started a tourist program themselves that allowed people to visit the grey, wrinkled beasts up close. In this realm, however, we learned not all elephant tourism companies are created equal.

Many offer elephant rides where tourists get on a saddle above an elephant and amble through the jungle, while others offer a chance to ride them without a saddle, or others the opportunity to walk next to them.

Rose and I researched what was available, and learned that a lot of the tourist spots that offer “rides” either mistreated their elephants by sticking them with sharp objects to keep them submissive (something that many admit is the only way someone could get on an elephant – by having someone jab him/her into submission) or those that claimed not to intervene in any nasty way with them, used saddles which with the weight of a tourist on top of it, could put an undue amount of weight on the elephant, particularly if they’re carrying this weight for hours at a time, day after day.

So, instead, we opted for an outfit that had a big acreage for older elephants, or injured elephants to live out their days in peace.

We started by feeding them: 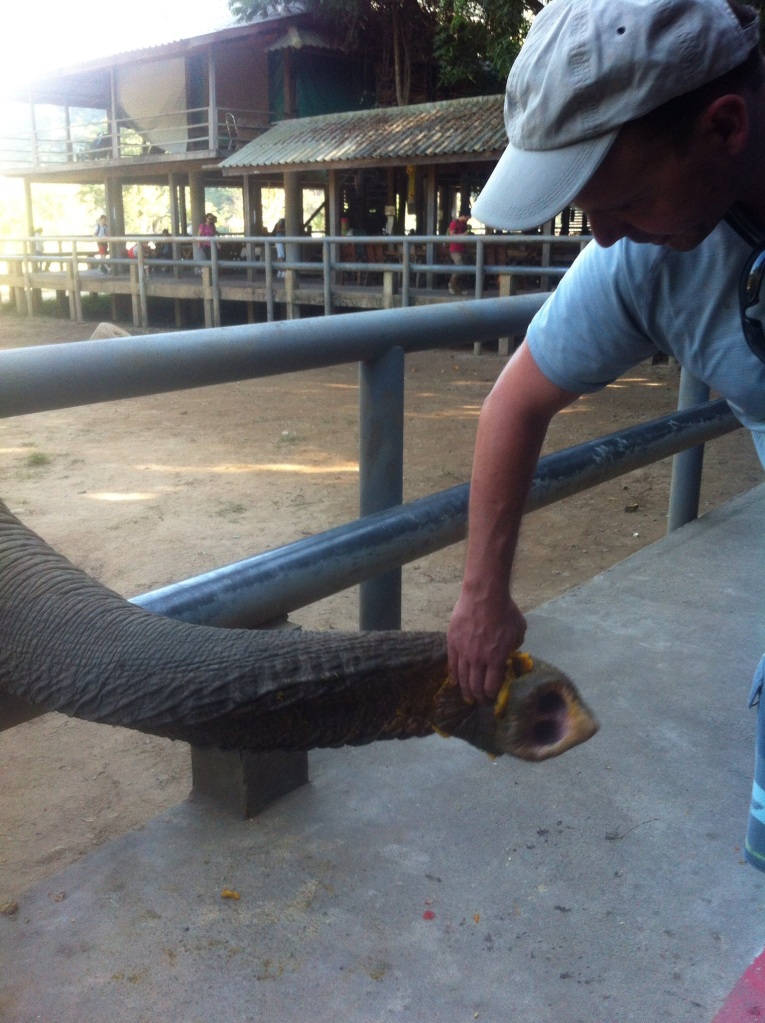 And getting a glimpse and sense of how much 150kg of food really is:

We then toured the grounds next to them. I was really leery about this at first, wanting to keep my distance – because they’re hugely powerful animals. One whip of the trunk, and I’d be nursing my own broken ribs for lunch.

It was awesome to be in front of them, but at the same time, in my mind, I was encouraging our photographer as he lined up the setting and the composition to get on with it, anxious to be facing them once again, in case an elephant felt the photo put her in an unflattering light, and wanted to do something about it.

We wandered some more, and got a chance to wash them as well:

Once again, the sun was relentless. We eventually wandered into some shade, though not in as daring a way as the trainer: 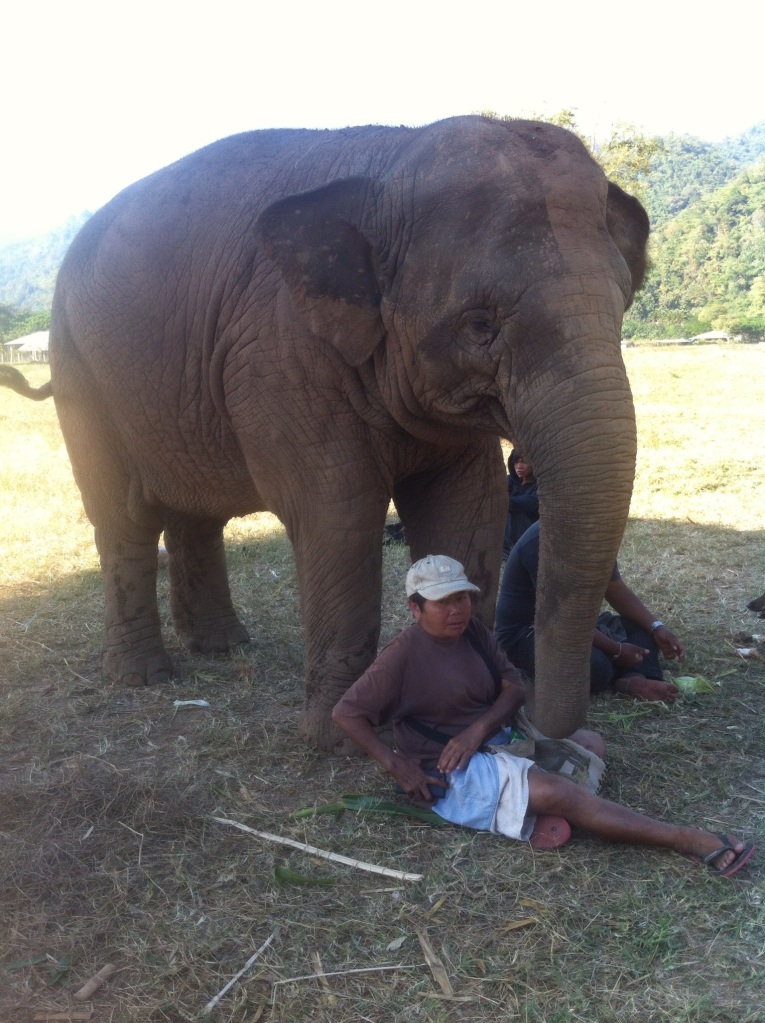 After saying goodbye to les elephants: 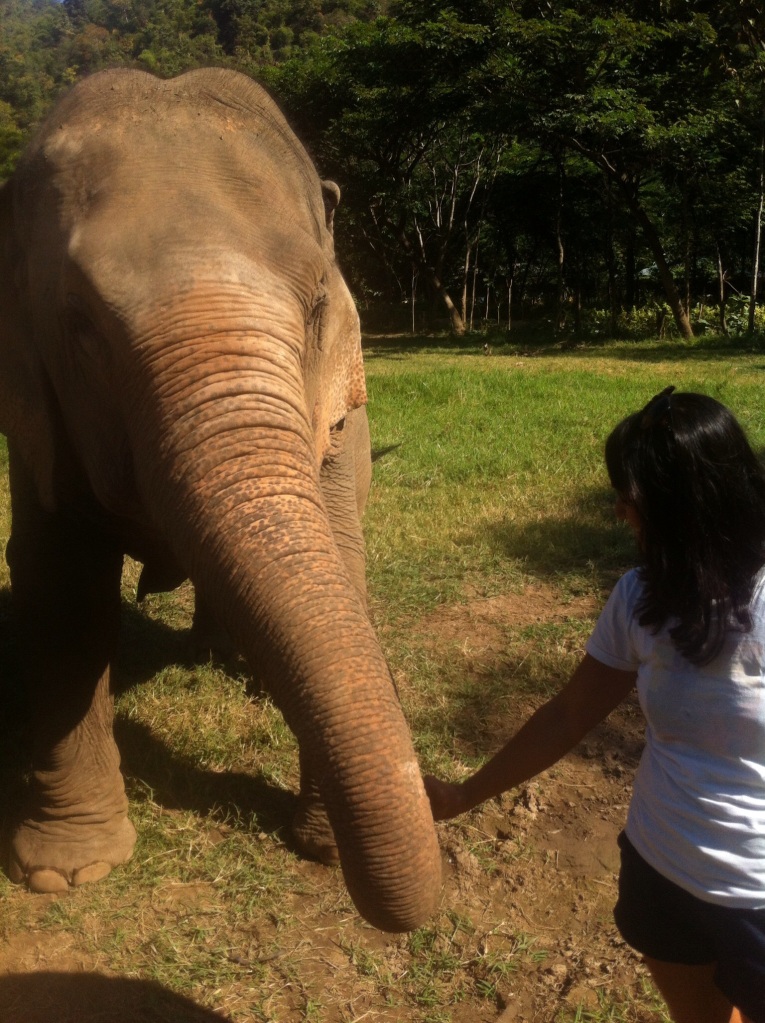 Rose and I set our sites our next stop, a quick stop in Bangkok before visiting a country that I think no amount of advance planning could prepare us for: India.