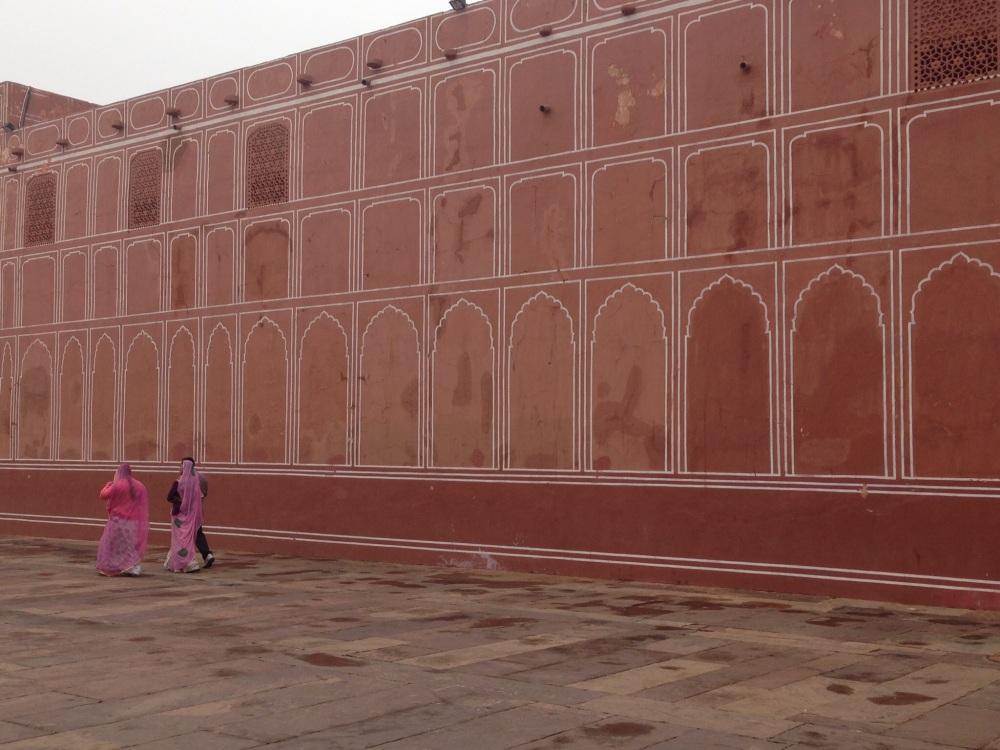 We’re in Jaipur, the capital of the biggest state in India: Rajasthan.

Translated in Hindi as the “Land of great kings”, Rajasthan is widely known as the place where Maharajas lived lives of opulence that would put today’s highest-spending hip hop artists to shame (with the exception maybe of Dr. Dre, and Jay-Z who are both industries in their own right).

While the two groups might have shared the same taste for extravagant parties, and big chunky jewellery: the difference was that Maharajas did it as their livelihood.

In other words, they were rich for a living.

Sadly, hip-hop artists had to work. Maharajas? Just be born to the right family.

Quite a good skill, if you could pull it off. Unfortunately for them, it wouldn’t last.

After Indian independence in 1947, the fiefdoms were consolidated into a single state, which inevitably stripped them of their royal powers and largesse, as the British, who had been their benefactors, had now left town.

With this new vacuum, many former fiefdoms struggled to pay the bills. Understandably tough, when you’re sitting in an 80 room palace, and it has dawned on you that you can no longer afford to pay your peacock groomer. Faced with these difficult decisions, some Maharajas sold the lot and called it a day, while others took advantage of a new opportunity: tourism.

Luckily for them, many people not only wanted to see how lavishly they once lived, but were willing to pay for the experience. Recognizing this, some Maharajas sold their estates and palaces to international hotel chains or decided to run them themselves.

This ushered in their new incarnation as ticket sellers to their past, giving people entrance to their former palaces now converted into museums or hotels.

In a change of fortune, many Maharajas chose to work, which, if any of us could be so lucky, meant they now made money showing off how they used to spend money.

And Rose and I were one of their new benefactors, having bought a ticket to walk the grounds of Jaipur’s once lavish City Palace, built by the founder of Jaipur: Jai Singh II. 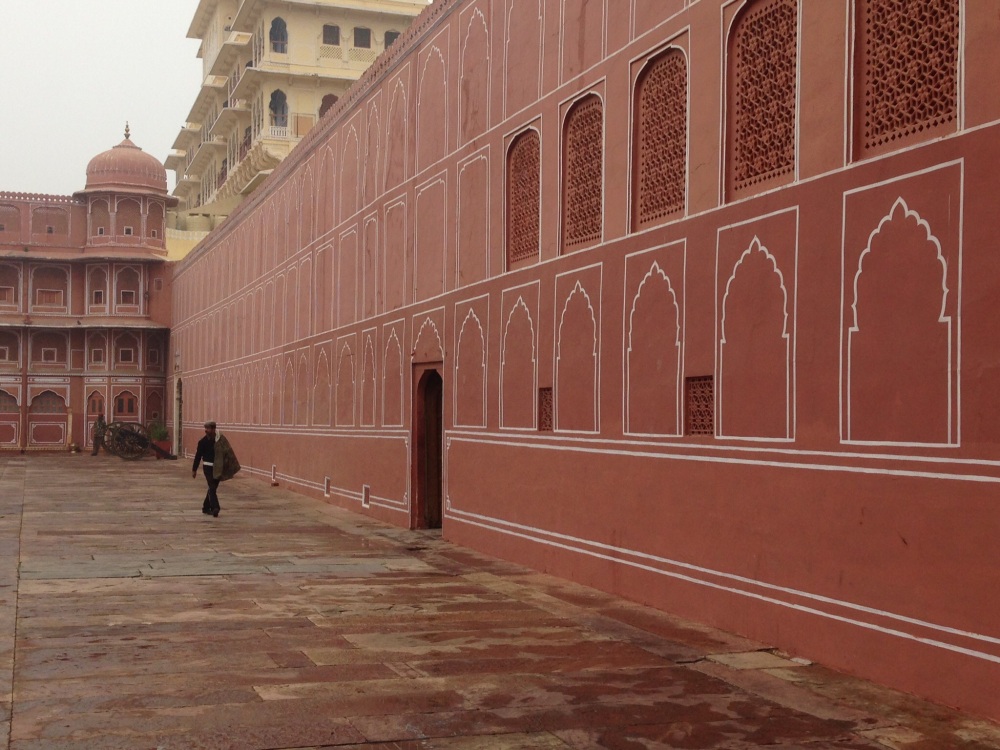 In true royal fashion there were plenty of costumes on display showing off jewels encrusted in lapels, and in other corners tossing away pretence altogether by just having a jewel as the entire lapel.

The palace also had a lot of inlay work on their balconies, which, after doing his accounting, had the Maharaja had to lay off his peacock groomer, was a smart move because he could at least remember what they looked like when they were healthy: 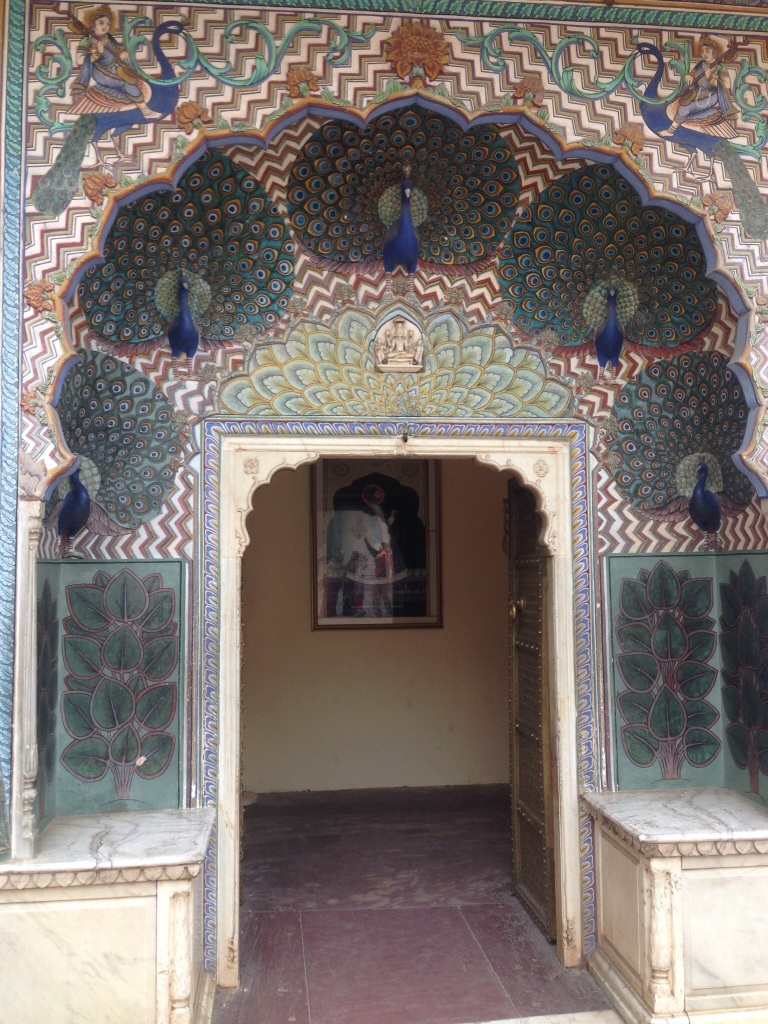 After touring around for a while, however, the thing that really caught my eye was this: 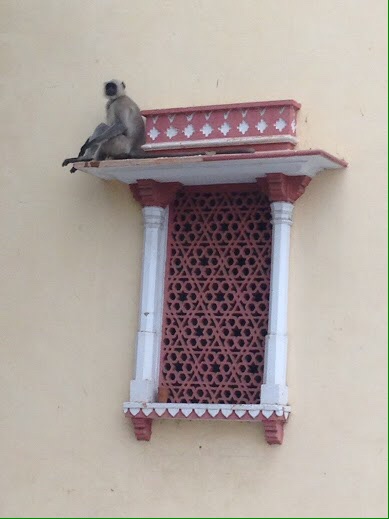 Monkeys. They were everywhere, and amazingly acrobatic. At one point while Rose wandered through a jewellery exhibit I chose to stay outside and watch them run around and swing from tree to tree. It looked fun. 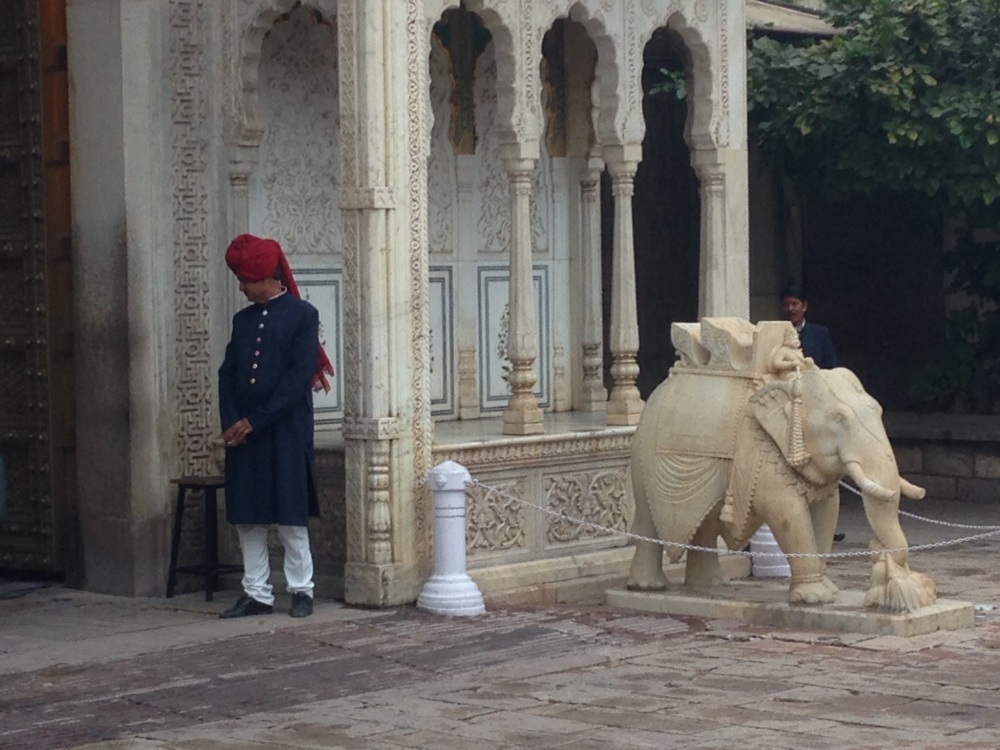 who had taken it upon himself to be my tour guide through a costume gallery, moving from one shiny jacket behind glass to the next, giving an explanation of each one’s importance:

“This jacket was worn by the Maharaja when he ate Naan bread”
“This shirt he wore only when he ate lentils”.
“These pants are his toothbrushing pants. Yes, he wore different set of pyjamas to bed.”.
“Do you pluck your eyebrows?”, he would ask “No, I don’t”. “Well, it was a very important part of the Maharajas day, and he would do it wearing this special shirt made specifically for the occasion”.

And on. And on. And on we strolled through the minutiae of his royal wardrobe. Just when I thought I was goingto shake him, he would careen in to a speech on underwear for a half hour, before switching into his dissertation on royal toothpicks.

I give him credit that his scholarship never wavered, even when I turned from polite indifference to outright contempt with a look on my face saying: “Thanks. But give me the cyanide”.

So, even if it was only for a few minutes, watching monkeys jump around freely was a treat. Also, on our way out, I spotted a sight that I had always associated with images of India since I was a kid: 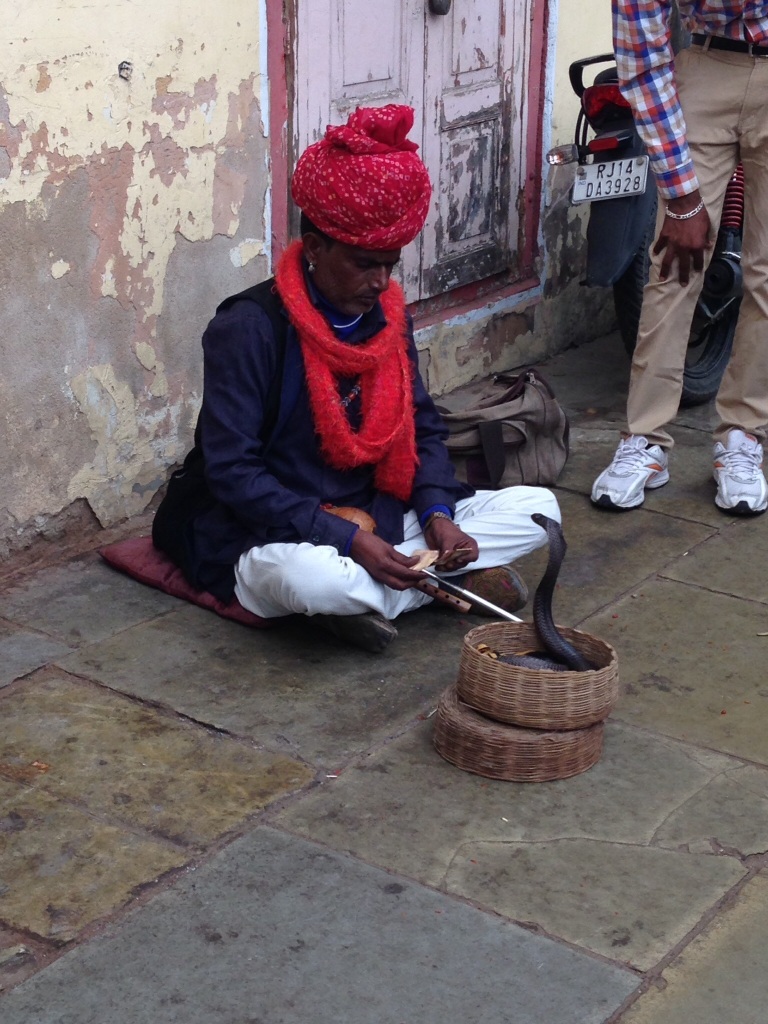 It was the only time we’d see a snake charmer. Much like the Maharajas’ glory, I think their time had peaked.

At this point, we were also both getting hungry, and soon set off for a misadventure at what we were told was the go to restaurant. On the menu was advertised the special dish: Rajasthani Thali, which is an assortment of lentil dishes and other vegetarian sauces. 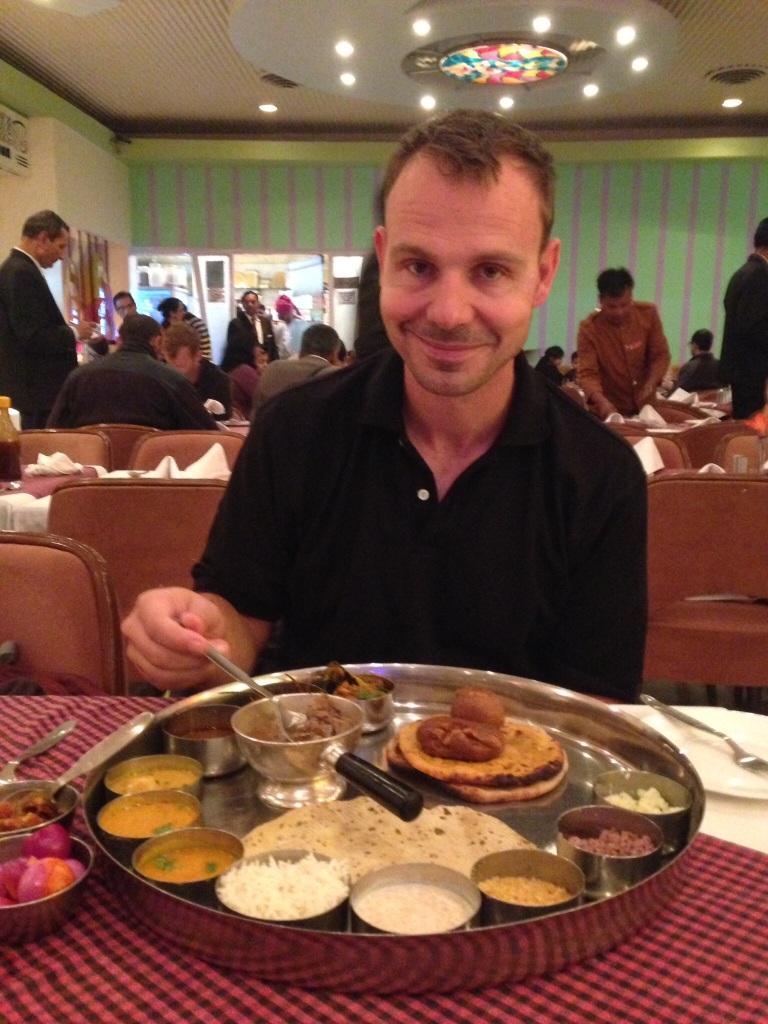 Looked promising, and the way it was advertised, so we thought: was that one of us could order the big version, the other person order a smaller version, and both of us could get as many re-ups as we wanted for each lentil dish we finished.

Even before we ordered, we asked the waiter if this was indeed the case, and we were reading the advertising properly. He told us yes.

But, then when he delivered the food, he changed his mind: “Not possible”, he said.

To put another bureaucratic knot into play, it was also explained that if someone ordered the big thali and had refills, you were not allowed to share with your neighbour. And, given the huge number of waiters roaming around, it seemed to be enforced.

So, the only way to have the big Thali with refills was that if both of us ordered it – or one of us did, and the other person had to order something other than a Thali.

My explanation probably doesn’t make any sense, and we’re still both confused by the entire thing, but the result was that I ordered the big Thali with refills and Rose ordered a separate dish. And it was more of a big deal, since we were both on a budget, trying to stretch every dollar we could.

But annoyed with all the back and forth and recanting of their position, I ate myself into a stupor by asking for more and more and more refills as I went – mainly because I was annoyed and determined I was going to eat well beyond pleasure to force the staff to keep going back and forth to the kitchen, in hopes that they’d have to add a new disclaimer after I’d left forbidding people to eat as much as I did.

It was all really tasty. I knew I’d reached the end when the elastic band on my pants was taut and sweat broke out on my forehead thanks to two pounds of lentils burbling in my belly. 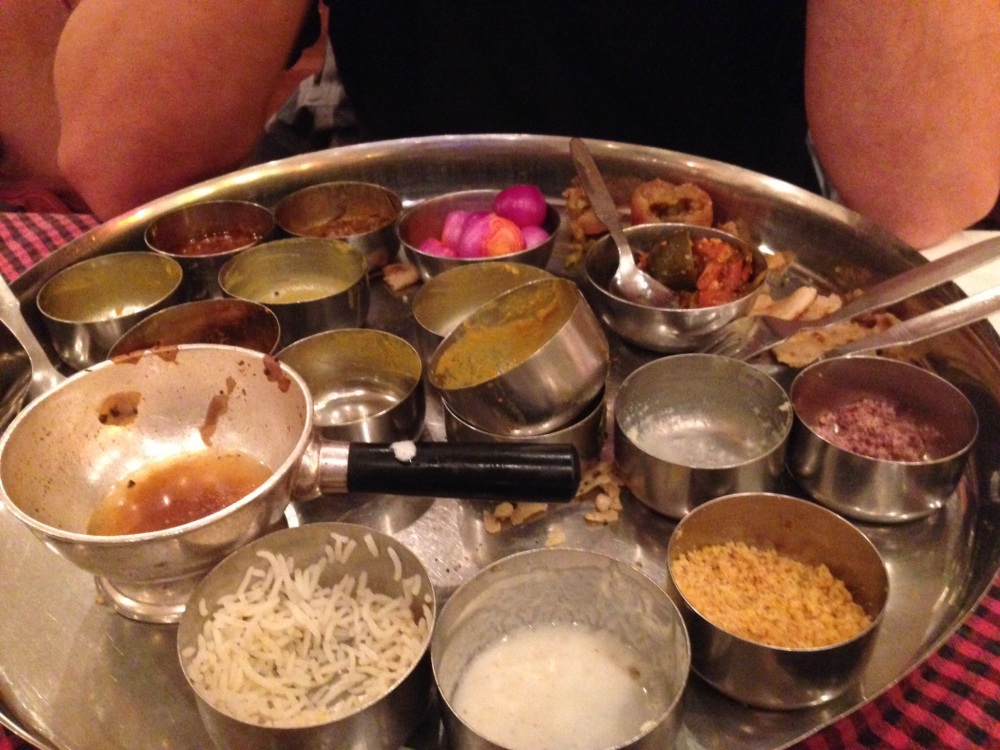 I slowly waddled out, and we found our rickshaw and set off next to see another popular site: Hawa Mahal or the Palace of the Winds. 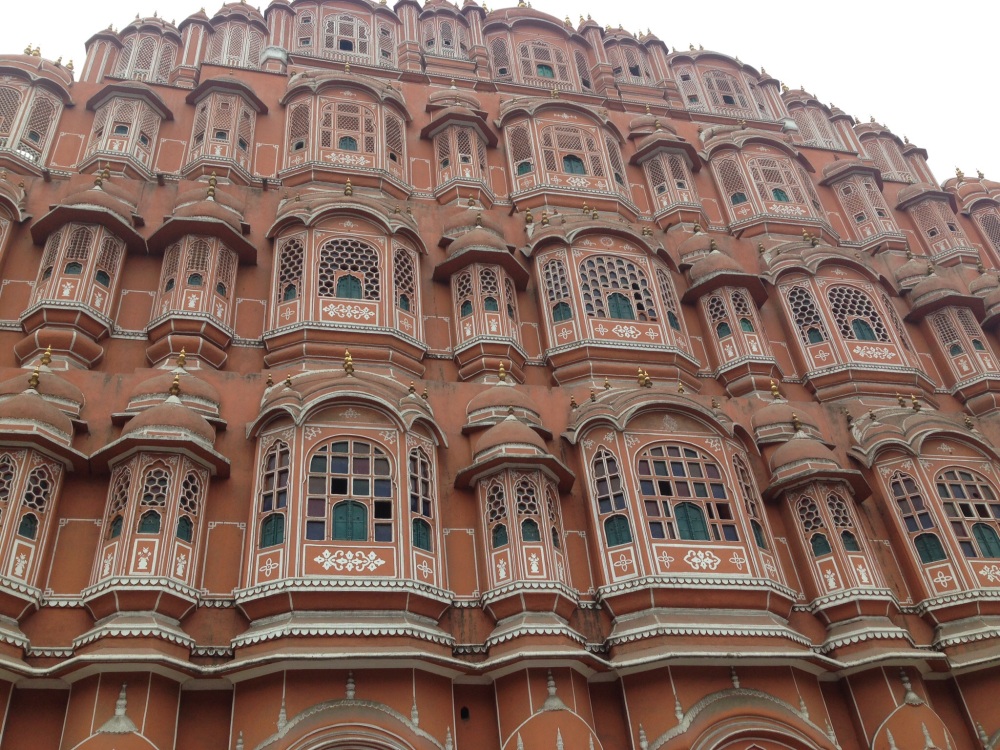 During the Maharajas reign, it was designed for royal women to be able to look out at the street action without being seen. An early equivalent of the two way mirror. It was interesting enough: but we only stopped for 2 minutes. I took a photo, and we hopped back in the rickshaw, on to the next spot – which was sort of my issue with Jaipur – that it didn’t feel that easily walkable.

Sites were fairly scattered around, and it meant having someone cart you around everywhere, which isn’t the end of the world, but I like the option to walk: especially after I’ve eaten enough to last me three more future meals.

En tout cas, we next stopped at Jal Mahal, a water palace built by the Maharajas as a place to cool off when things got too hot for them at the City Palace. 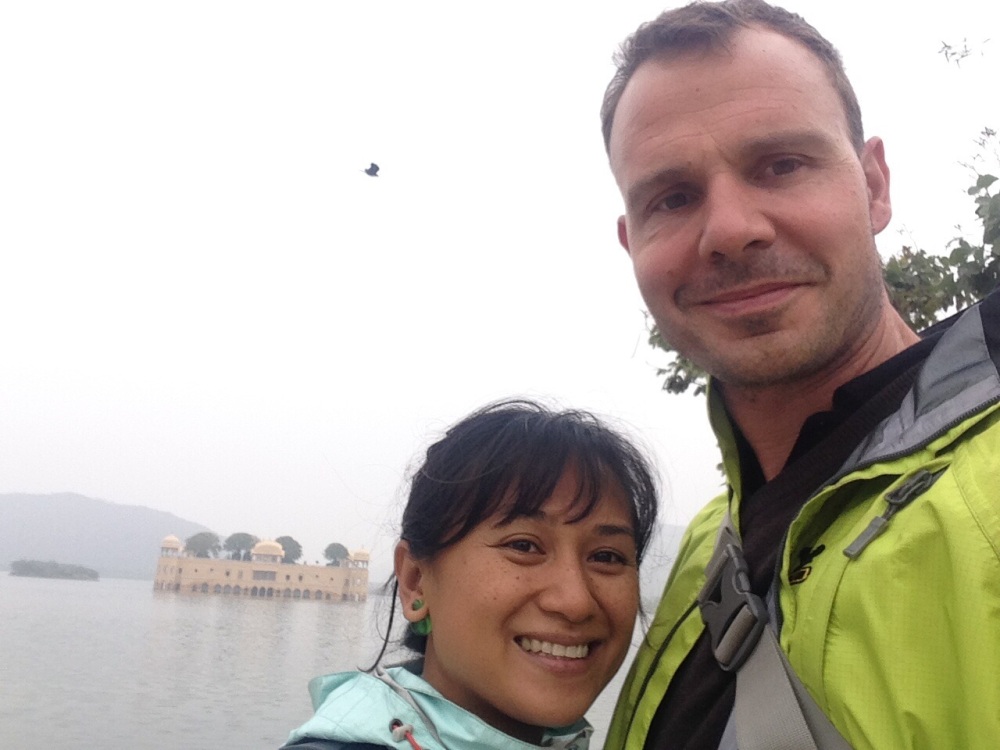 This was as close as we could get, which was fine with me, because I wasn’t interested in catching a boat out there only to unwittingly attend a two hour lecture on his highness’ former bathrobes and bathing suits:

However, with the turn to democracy, it also means that tourists can now play at their own bid for accumulating things, and showing off, and Jaipur has two main industries with which to do it:

And, unsurprisingly, both were scheduled on our day tour with our rickshaw driver, who similar to arrangements with our driver in Agra stood to make commission if we bought anything.

We started off taking a tour of a textile factory: 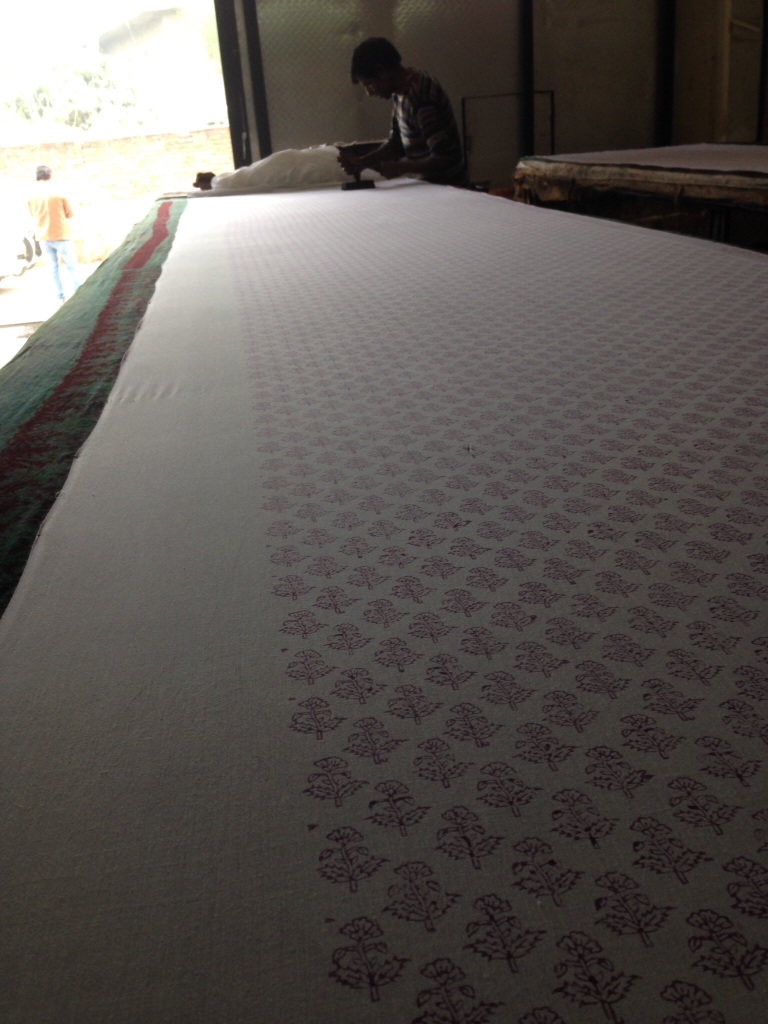 And maybe as a result of coming so close to buying a carpet in Agra, we decided we couldn’t leave empty handed a second time – and thought this was it, it was time to make our rickshaw driver more money.

I’m really not into clothes shopping. But I’d been in need of a suit for a long time, and this purported to be one of the places to do it. Also the other reason was that we would be attending an Indian wedding, and it was fairly clear that we couldn’t recycle our easy-dri t-shirts and pants, that look like they belong on a high school gym teacher, into taking this fashion leap with us.

So, I watched Rose get swaddled in layer upon layer of fabric in various versions of what would become a Sari: 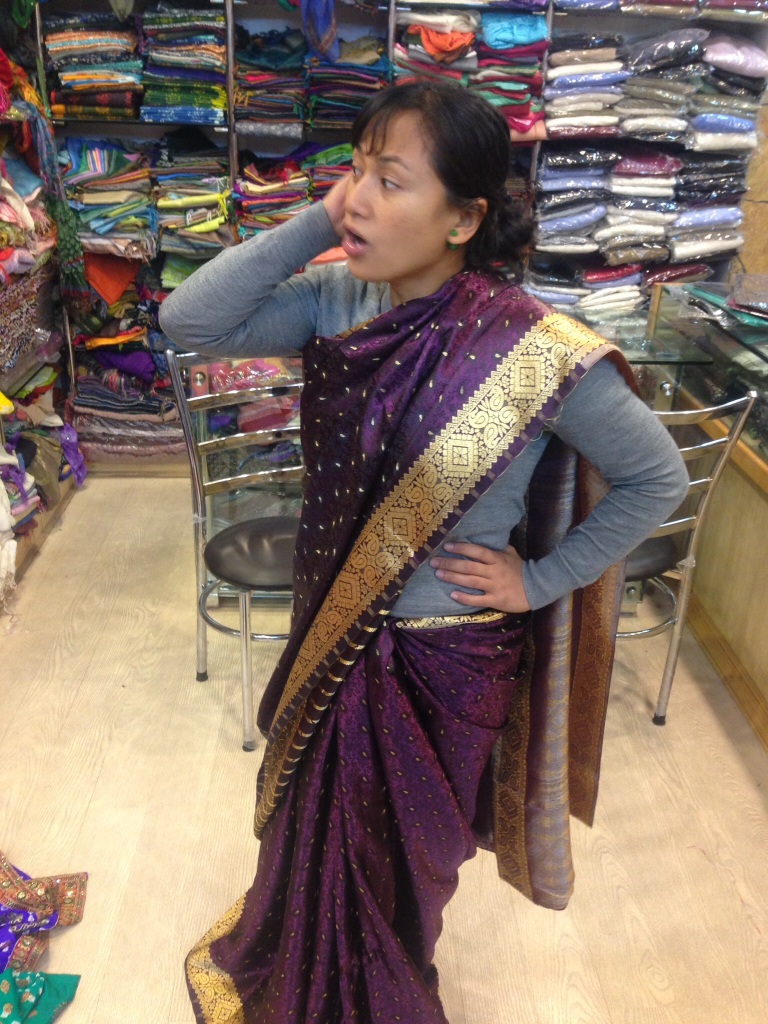 While I ordered a suit and shirt and three chai teas to get me through the next three hours of measuring, tweaking and hand patting.

It was necessary, and I’m glad we did it. I was convinced we would be hijacked on the price – but after chatting with other people who got suits and dresses made in Vietnam, and in other parts of India – we landed right in the middle. Not bad.

And so, after another couple of hours slinking through jewellery stores, we called it a night and prepared for our next stop the following day: Pushkar. A small town on the edge of a desert where we’d ride into the sunset between two humps.