A few of the reasons why Hindus take a pilgrimage to Pushkar every year. Sitting on the edge of the Thar Desert in Rajasthan, Puskhar is a small town of nearly 20,000 people, which came into being, mainly from the lake sitting at the center of it.

According to Hindu legend, the lake was formed from Lord Shiva’s tears who couldn’t stop crying after the death of his wife Sati. As a result, Hindus consider it a sacred place to visit, and cleanse themselves with the water of the lake. Plus, many visit the town’s Brahmin temple – one of only a few in the world.

Coming off our visit to another Hindu pilgrimage site – Varanasi, I wasn’t sure what to expect. However, we soon found things work much differently here. There’s fewer people. No cremation pyres next to the lake with people’s ashes being shovelled in. No human bodies. And no millions of litres of raw sewage pouring in to spoil it.

Sound like a utopia? It was in many ways, but there was one thing it had in common with Varnasi. A little something we’d read about extensively in guidebooks and other travel blogs: ye olde scams.

Here’s how the main one was described – somebody will approach you on your way down to the lake’s edge, often someone dressed as a holy man, saying they will do a blessing for you. You follow them down, and the holy man asks how many people in your family, let’s say you tell him 4. He then blesses each person, while asking you to repeat his blessing. Once he’s done, he says it’s 1,000 rupees for each person. 1,000 x 4 = and you’re now in the hole $80CAD, and you haven’t even bought lunch.

Treading carefully, Rose and I made our way in. And sure enough, within 10 seconds we were spotted (pretty easy since I hadn’t put much thought into being inconspicuous, I was wearing a lime green jacket. Basically I looked like a tall, glowing tennis ball.) Fair enough, we took off our shoes, as is the custom when walking down to the lake and the secretary of a holy man began her pitch:

“We make blessing for you. You make donation to charity”, she said

Rose at this point wasn’t interested and had wandered over to a spot by the lake, while I carried on the negotiation:

“Any amount I want. I decide what I want to donate. It’s my price.”, I insisted, wanting to be deliberately clear I wasn’t about to spend the equivalent of 1.5 days budget on a prayer.

And I was led to the river’s edge where I was handed off to a holy man who asked me how many people in my family, to which I replied:

“My donation. I set the price.”, now obsessive about making it clear I wouldn’t agree to a whimsical price structure.

He led me through the prayer, which he asked me to recite with him, and I thought: “I’m donating money after this. Isn’t that enough of a contribution? Why do I also have to recite words?”.

In truth, I bring up money as a justification for something, which it really doesn’t have anything to do with. Here’s what it does have to do with: I was lazy. I just plainly did not want to remember words, and recite them back to him. I thought the holy man could do the work.

However, I did my best, fumbling along, much like Anglo Canadian kids do when singing the French portion of the Canadian national anthem.

Once all the prayers and flower petals had been cast, it was the moment I’d been waiting for, really all throughout my time with the holy man at the lakeside: the payoff.

I approached the donation booth, handed over my donation, which I think was a couple of Canadian dollars, and braced for it.

“Yes, thank you sir. Have a good day”, the attendant replied.

It never came. No: “one more thing sir”, or “extra rupees because you’re a tall person”, or “costs more because your family is in Canada, farther away for prayers to travel than if you’re from Europe”

I sat next to Rose on the lake’s edge, and one of many cows roaming around, came up closer: 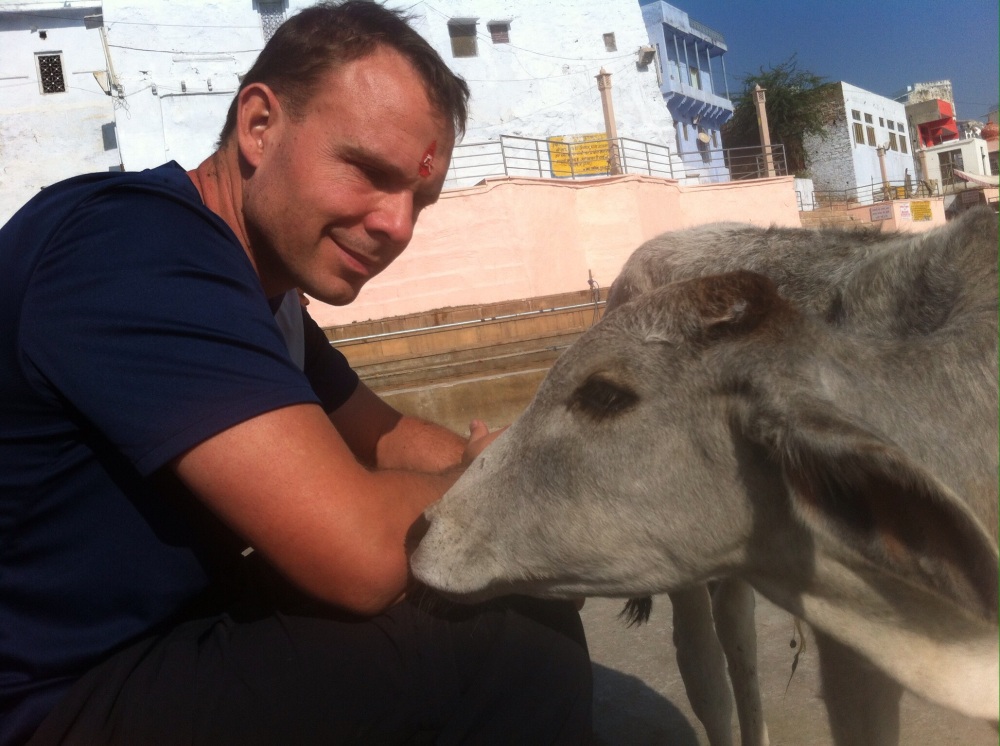 I had a moment, excited and confused at not being scammed. Cows are of course sacred animals in the Hindu religion, and as this one walked off, I watched it drop off a healthy amount of fertilizer on the pavement. So, at that moment, I found I was literally staring at the thing which also happened to describe how I felt at the same moment:

I was surprised I wasn’t asked to donate more, not merely from all the guidebooks warning about the lakeside scam, but also coming off our very first experience in Pushkar, which had set a negative tone.

When we had arrived at our guesthouse in Pushkar, the manager said the room which we had booked online was ready and we walked up three flights with our backpacks into a decent looking room when he said:

“Your room is standard room on the first floor. This is deluxe room, which costs more”, he replied.

“But we want our standard room. That’s why we ordered it. Why did you bring us here?”, we said.

“This room is empty for next two days so I can give you deal.”, he replied.

On and on it went. We explained that unless he could give us the same price for the new room as we had for the standard room then we weren’t interested. He backed off eventually seeing we were annoyed that we’d been brought up three flights of stairs, not to go into our room, but to listen to a sales pitch for another. He gave us the room to try to make amends, but still suggested we pay a little more than the other room.

We stayed there for a couple of nights, and paid a little bit more for it (not the amount he recommended) because it was a better room, though felt pissed off by his hard sell.

Regardless, the guesthouse itself was nice, and had a rooftop balcony where we looked out at the town over breakfast every morning:

And saw the monkeys scampering across rooftops:

Pushkar is a small town with essentially one main street where all the shops and cafes are: 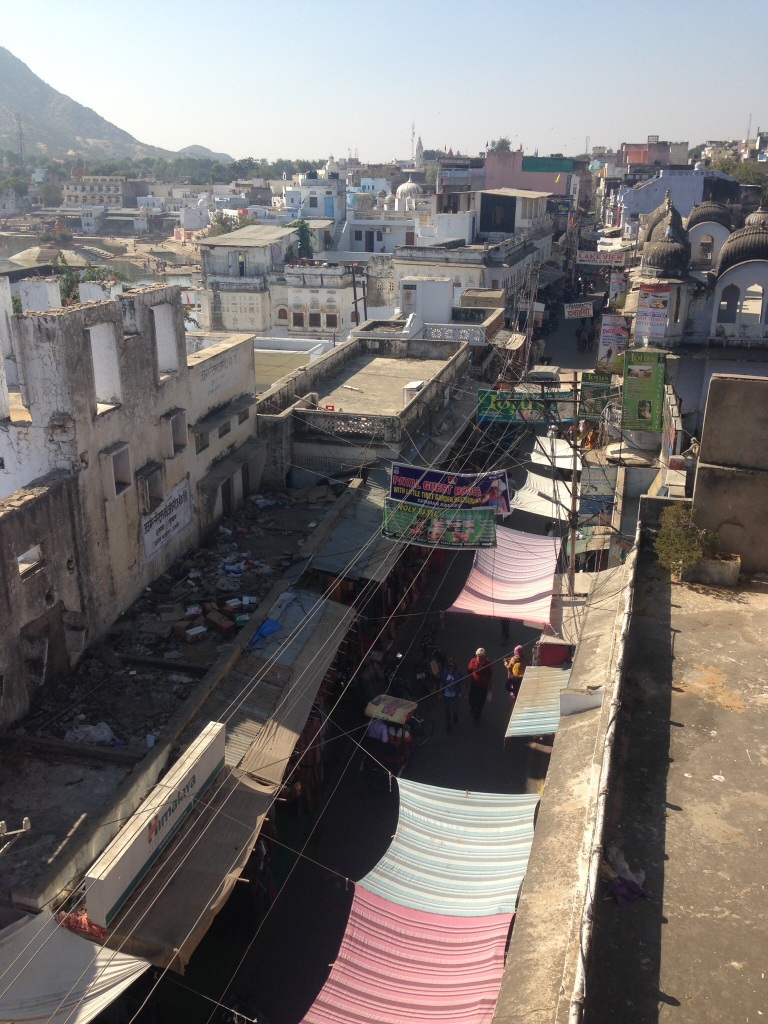 We wandered up and down for a day or two, which was a nice change from having to get in a rickshaw to go from place to place. There’s food stalls set up along our alleyway where locals ate snacks and hungout: 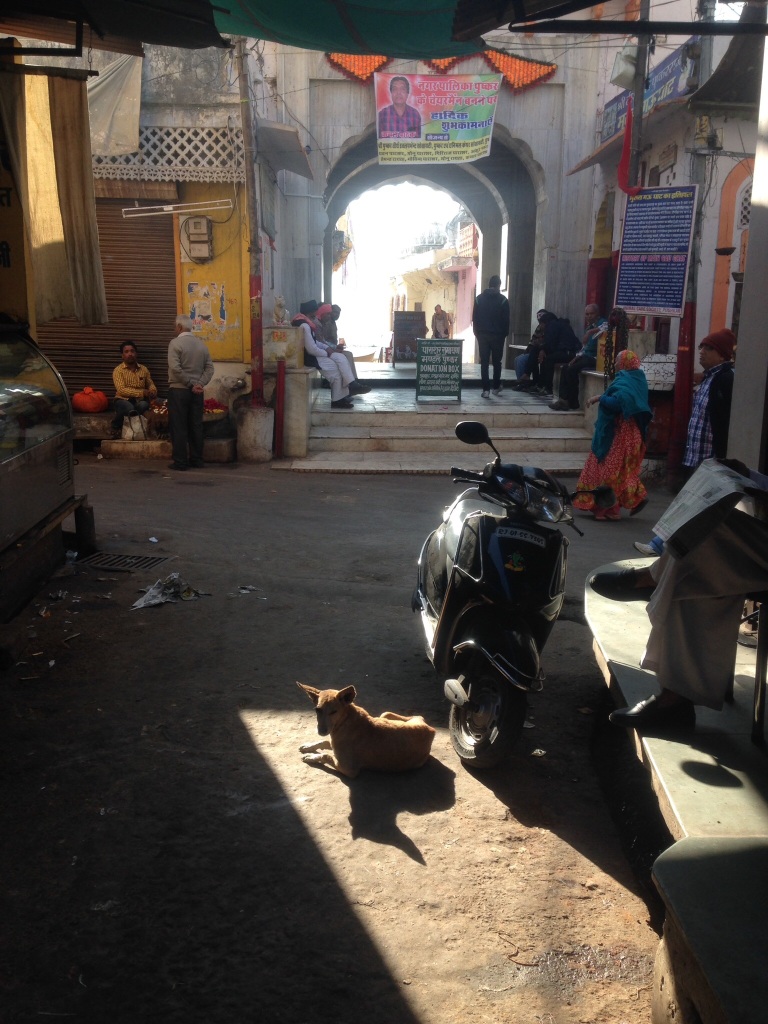 Farther down the main road, other locals snacked wherever they felt like it:

Now this brings us to the real reason we sought out Pushkar:

Initially we planned to spend a night in the desert, camping out with the camels and sleeping under the stars. The more we talked with people, we learned that nobody was out this time of year, because the nights were getting too cold. Instead we opted for a sunset tour, roaming around for a couple of hours with them.

What’s amazing about riding one is how high up we were. On our way back in to town, we could see above buses: 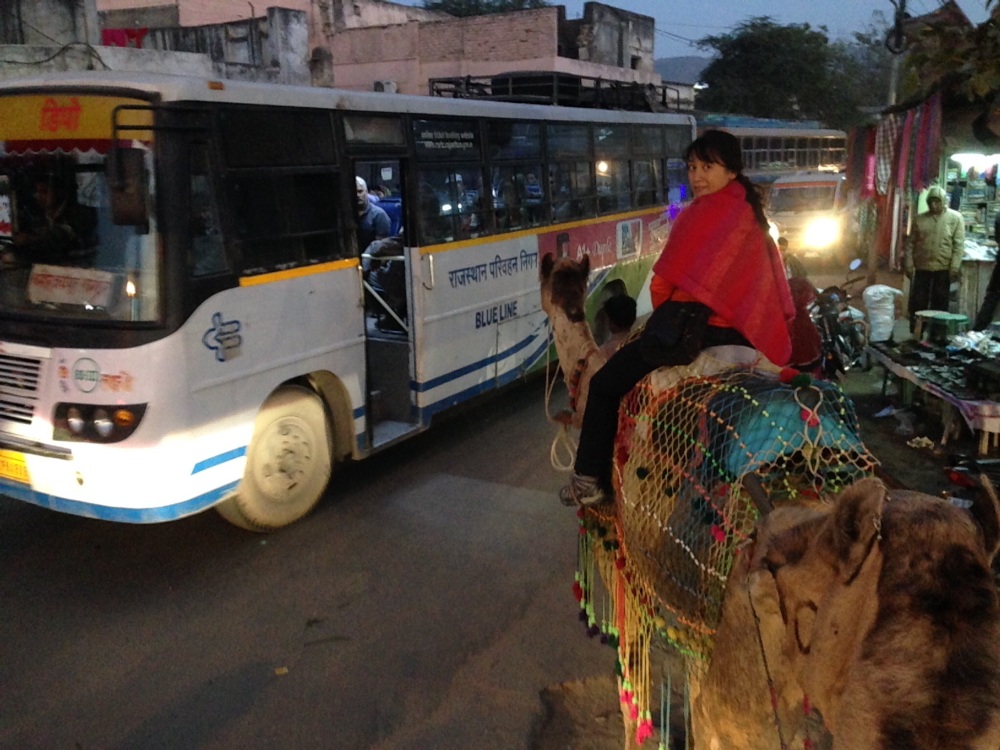 But first, our camel-minders led us in to the desert:

At at some point he encouraged him to gallop, which felt like madness since I kept feeling my weight shift and thought I’d fall over the side – not to mention the unergonomic, physical pain of smashing up and down on a seat that pitched my torso forward, and everything below my belt backward.

We eventually rode in to a gathering of other tourists waiting on the sunset:

There, we hung about for a half hour, trading stories with them and watched the sun go down before we eventually headed back.

Our next stop was Udaipur: another Rajasthan city filled with former palaces and centrepieces of the Maharajas’ rich days gone by. But unlike its former residents who, on travel trips outside of town, must have arrived back in the lap of luxury, we rolled on the rails as paupers.

Otherwise known as 2nd seat class, where rats roamed the floor for scraps, teeth chattered from the cold outside, hustlers wandered up and down the rows playing instruments or spinning yarns asking for money, and your seat assignment could be anyone’s guess.

Misery loves one thing, and ours, as it turned out, was really good:

These guys had been friends with each other for a long-time, and shared their food with us, and gave us tips on where to go and what prices to expect.

Although we were four hours late arriving, cold and tired: our impromptu local guides softened the blow.

Thanks guys – wherever you are.