That’s more or less why people visit Goa. Some choose more from the list than others, but together they help account for why Goa is India’s richest state, with a GDP two and a half times larger than any other Indian state.

It’s tourism industry started in the late 60s – 70s as a retreat for hippies, giving them a place where they could not only enjoy free love, but also a discounted price on accommodations. The spiritually inclined could also strike a warrior pose in the sand and later on drop acid in front of an extraordinary sunset.

This culture morphed into a DJ/club scene in the 80s, matching synthesized drugs with synthesized beats until the next evolution emerged in the 90s with rave culture that espoused glow in the dark colour palettes made even more wildly attractive thanks to the pharmaceutical packaging of emotion into pill form: ecstasy.

Now here we are in the 10s with new drugs, digital music that can get its point across without having to borrow samples from prior musicians, and people no longer having to explain to their friend, face-to-face, how f’d up they’re feeling and how much they love them, when they can do the job in seconds by texting them an emoji.

Of course, it could be argued that Goan tourism started even earlier than that. In the 16th Century, a Portugese fleet landed here, and claimed it for their crown as an overseas territory. Even after the British colonized India, Goa stayed under Portugese control, and it remained that way a good 10+ years after India gained independence in 1947.

As a result, Goa has a large Christian population – though still half that of the dominant Hindu faith, it explains why, on our strolls through a nearby village where Rose and I were staying that we saw this:

North Goa is widely considered the place to go if you want to say “WAHOO!” with arms around people you’ve just met, whose names you can’t remember because you can’t hear anything but a pulsing bassline, and really what are names but labels anyhow?, only to wake up with someone in bed whose real name you still don’t know – but remember calling her “Purple Lollipop”, because last night she was walking around with candy.

South Goa is where people:
– who once went to North Goa but now have kids go.
– who are disillusioned with jobs back in Europe or Australia and are enrolled in yoga courses to help them find a calling or have arrived with a calling and are enrolled in courses teaching them to become yoga instructors.
– who have put themselves on a steady, daily drip of alcohol to forget things back home, which is achieved around 2pm everyday when the cumulative effect of beers from breakfast onwards has turned their thoughts fuzzy and also made walking in the sand that much harder so they return to their sunbeds to sleep until dinner time.

And Rose and I.

To begin, we arrived in a village in South Goa called Betalbatim where we toured around for a couple of days, spotting some of the Portugese/Indian architecture on homes, which in some ways, reminded me of gothic homes we had seen in New Orleans on a previous trip:

We went to the beach in Betalbatim, which was really pretty, and also filled with Russian tourists: another key group that I hadn’t included on the list above. After speaking with a restaurant owner on the beach, he explained that Russian tourists began arriving in the early 00s, and kept arriving in subsequent years. As a result, restaurant signs are in both English and Russian, and we noticed cab drivers and other tourist operators speaking in Russian when they could.

“We go with whoever has the money”, one attendant explained to Rose and I as we waited for our own cab.

Judging from the people we saw at our hotel, it seemed to ring true. Most were Russian with a few English tourists. Aside from Rose and I whose country was woefully underrepresented, we met another couple who were also far from home: Colombia. And, after speaking with them, it became pretty clear that they wouldn’t be back personally to wave their home colours again in India.

The guy had planned a three week trip to India as a present for his wife’s birthday. As he describes it, even that was enough to stir up his wife, who sat across from him, glaring.

Apparently they had a really hard time – missing connections to trains, getting hassled by touts, feeling worn down by much dingier accommodations than advertised, and generally having a miserable time. Just chatting with them for five minutes we got the picture as they just ordered a mango lassi, and it came back to them looking see-through with no hint of yogurt or fruit, much less mango.

“You can see what I mean”, the husband said to us as his wife smiled, hiding her growl behind pursed lips.

Rose and I were just coming off our own share of hurdles. Riding one overnight train after another, discouraging touts at every turn, while trying to avoid being coaxed into paying higher prices on everything. I found it draining after a while: which is why we were in Goa, to relax and essentially do nothing.

After a couple of days in Betalbatim, we decided to head further South to another area where we had heard of other nice beaches, and more selection for restaurants: Palolem. 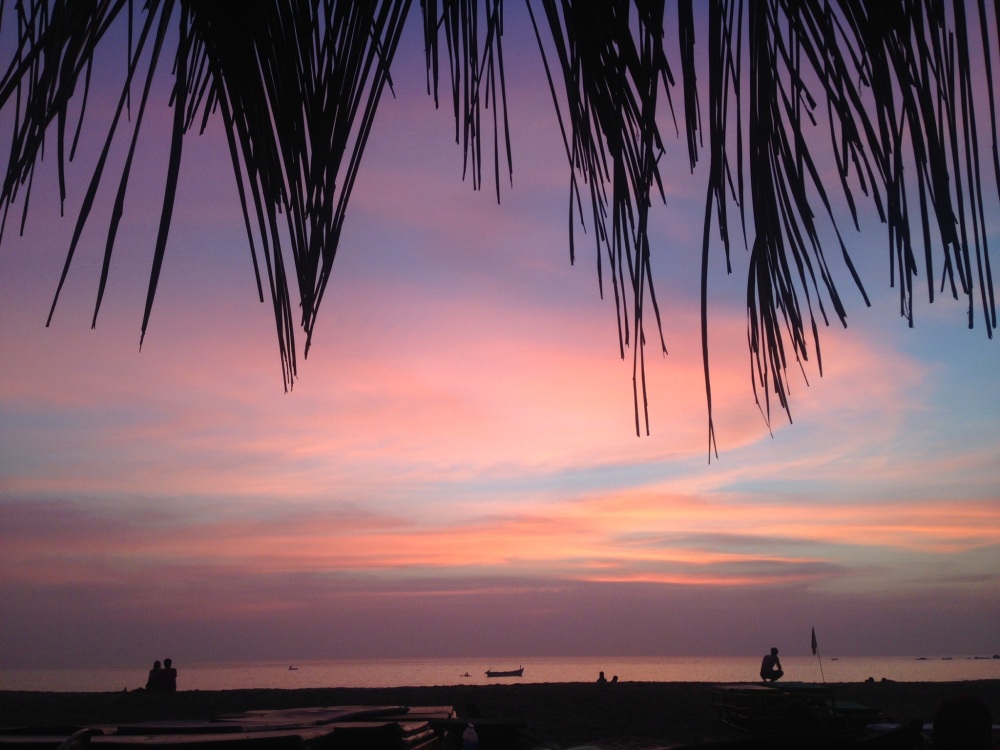 Here we met someone at our hotel who had also been travelling the area and was looking for South Goan style tourists who weren’t exclusively trying to give themselves amnesia through drinking. A group that she had been surrounded by at her last spot one beach farther up.

We hung out, rented a moped and zinged around this area of Goa, plus went farther off to seek out a distant waterfall – that we eventually found after a 1.5hr trip one way through villages and strained conversations asking for directions.

Also we went to one of the most colourful outdoor food markets, I’d experienced anywhere in Southeast Asia: 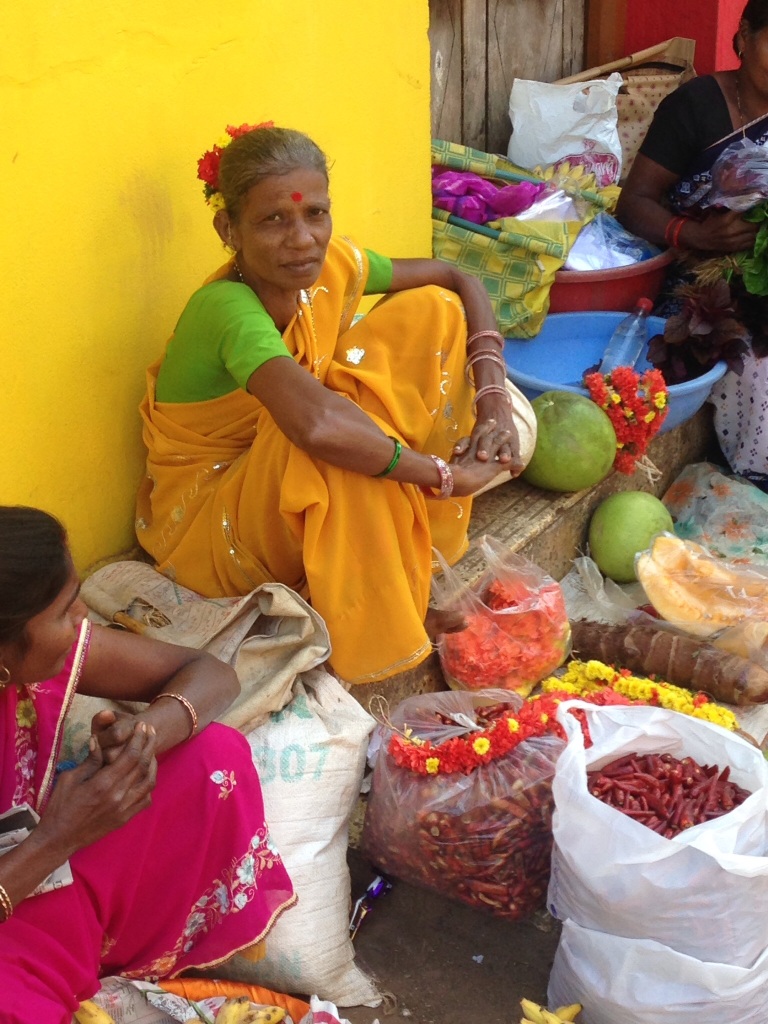 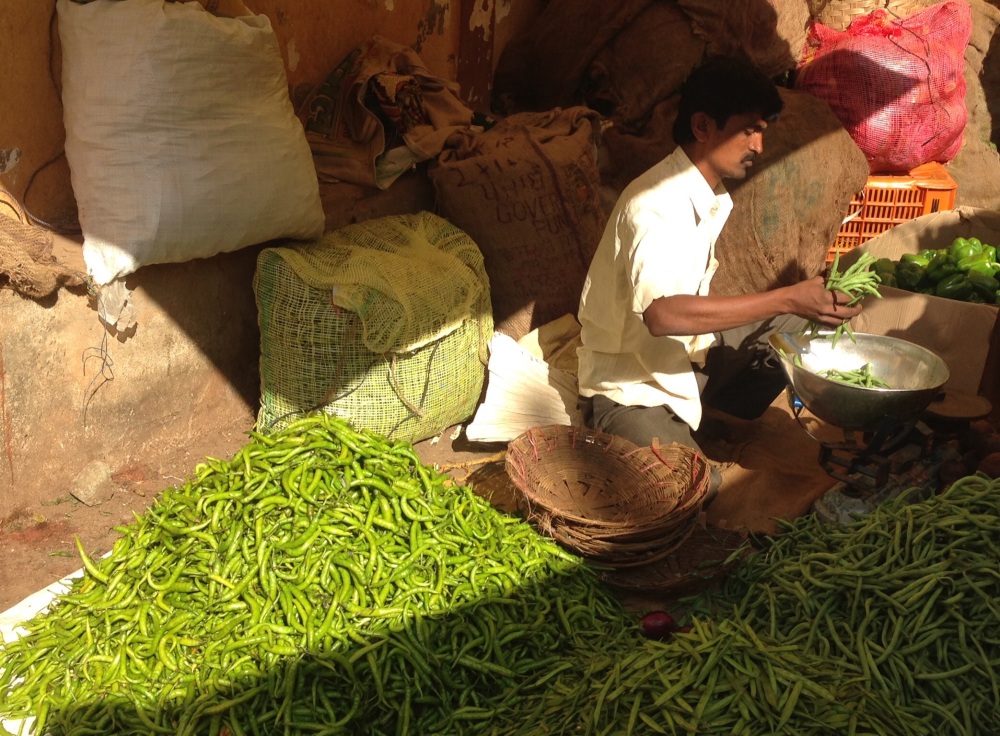 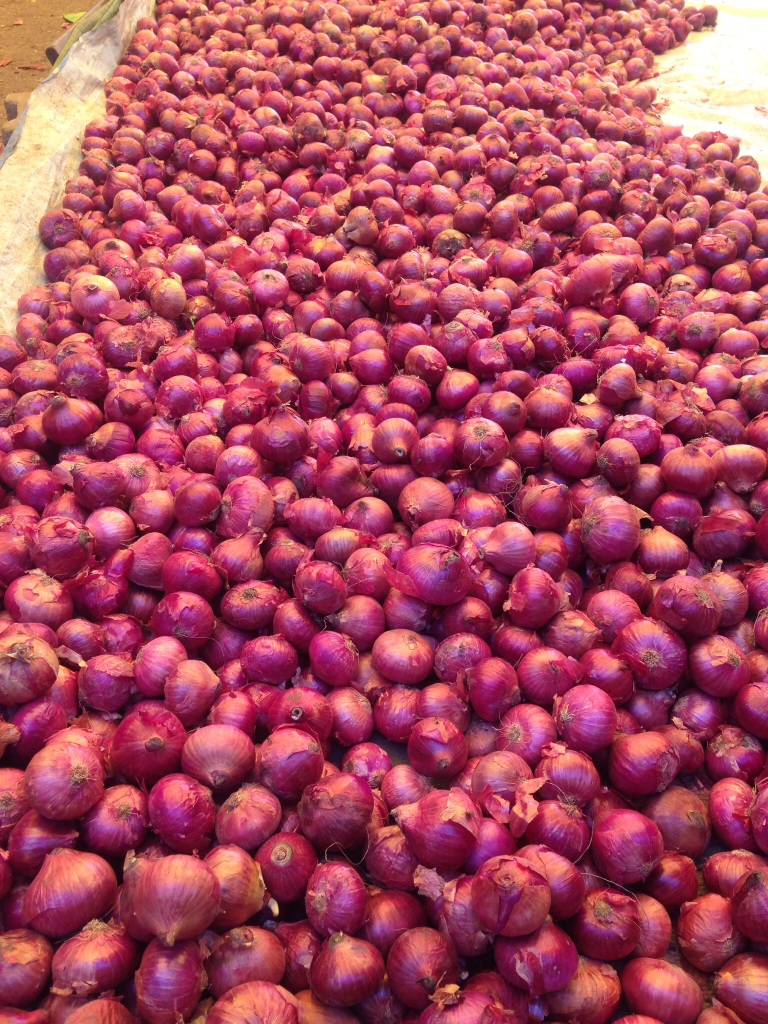 I thought it was pretty amazing.

But the majority of our time was spent on the beach. However, not all was running our Ipad batteries down reading books, one day we had to outrun this guy:

One of many local cows who wanted more food, it seemed, and made his way into the crowd without any hesitation to get it.

We also met a dog that stood for an entire half hour next to our dinner table, just waiting, waiting, and waiting for some kind of scrap. He didn’t whine or beg.

After we had given him some food, and our plates had been taken away he still didn’t want to leave. Just waited, hoping for something more.

Aside from wrangling with the occasional rogue vache and outwaiting a stoic dog, things were as you might expect on a beach, placid and still:

After nine days of eating and significant tans, we had sufficiently lazed out enough that it was time to leave.