Good books I read about New Zealand on this trip:

I didn’t get to a lot of books on our New Zealand leg, and I mainly blame this book. Why? It’s long. Clocking in at over a thousand pages, it’s no breezy bathroom read – however, I thought it was worth the effort. Set in the late 1800s during New Zealand’s gold rush it offers insights into the time, as well as different towns affected, like, Hokitika (I think my favourite NZ town name to say out loud). The books received some criticism for being too long without too much payoff, but I thought it was an interesting read anyway, particularly learning how and why different towns came to be what they are.

A journal of one trekker’s time through all of New Zealand’s nine Great Walks – which are so designated by a government body – as well as some lesser walks through the country. His experience’s are really funny – from eating uncooked lentils at night then sitting in his sleeping bag at night while they expand in his stomach to some characters he meets on the trail as well as the conditions of the trails themselves. I thought it was a great primer to read about NZ’s trails before we went – helping us shape our own trekking plans. We both met him as well ahead of our New Zealand trip, so admittedly there is a bias. Regardless, for a travel book where the author isn’t afraid to be self-deprecating and avoids earnestness, I think it’s a good one.

Obviously, you can see, my list is painfully anemic. If anyone has any recommendations, fire away – I really liked NZ, Rose too, and would definitely like to read more about it, whether fiction or non.

We spent our last two days in Kaikoura – a seaside town on the East coast of the South Island. Known primarily as a whale killing station over 100 years ago, Kaikoura has since put down its harpoons and cutters in favour of binoculars and photo shutters as a whale watching station.

From beast to beauty:

But Kaikoura’s tourism isn’t formed only by one animal. It’s also home to seals, dolphins, albatross and other rare sea birds. So, we set out on our last stroll in New Zealand, along the coastline to see what we could spot. First up were seals in their natural habitat next to an SUV:

Plus, some yawning the day away, as they lazed around near rocks:

We then changed terrain on our designated walk, and moved onto a cliff to watch the whale watchers (the budget version of whale watching) and hoped to spot a tail or water from a blowhole in the distance. Sadly, no.

However, we had ringside seats to an abundance of seals (all those dots nearest the water): 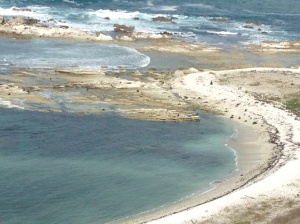 There were elements of the place that reminded me of Newfoundland, with an old boat or two laying around: 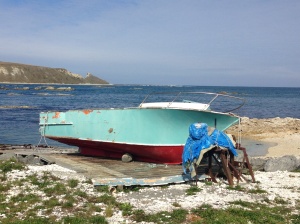 And, the rocky shore with overlooking cliffs:

In all it was a low key, relaxing couple of days and a nice way to finish our time in New Zealand. It’s a really amazing place, and for one that’s so small, in comparison to nearby Australia, there’s a ton of things to do.

Rose and I have both said independently that we’d like to come back to see and do more stuff. I found it really comfortable, and wished we could stay longer.

However, 28 hours, 4 planes, a tricycle and a taxi await.

We’re off to the Philippines. First stop: Donsol to hopefully spot Whale Sharks. 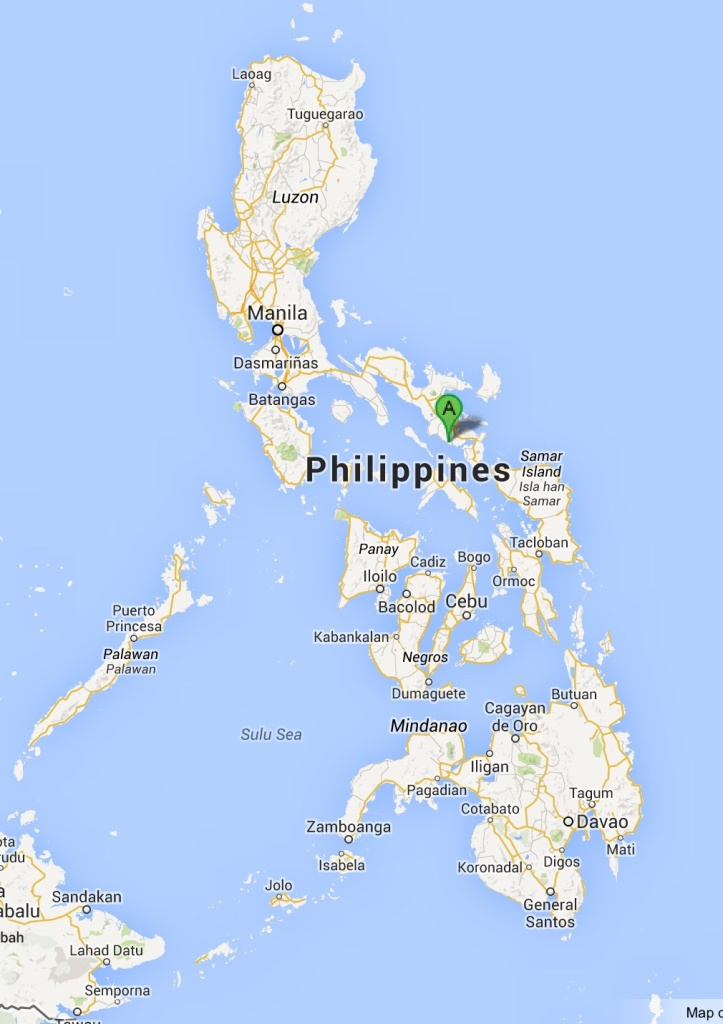 Talk to you when we arrive. 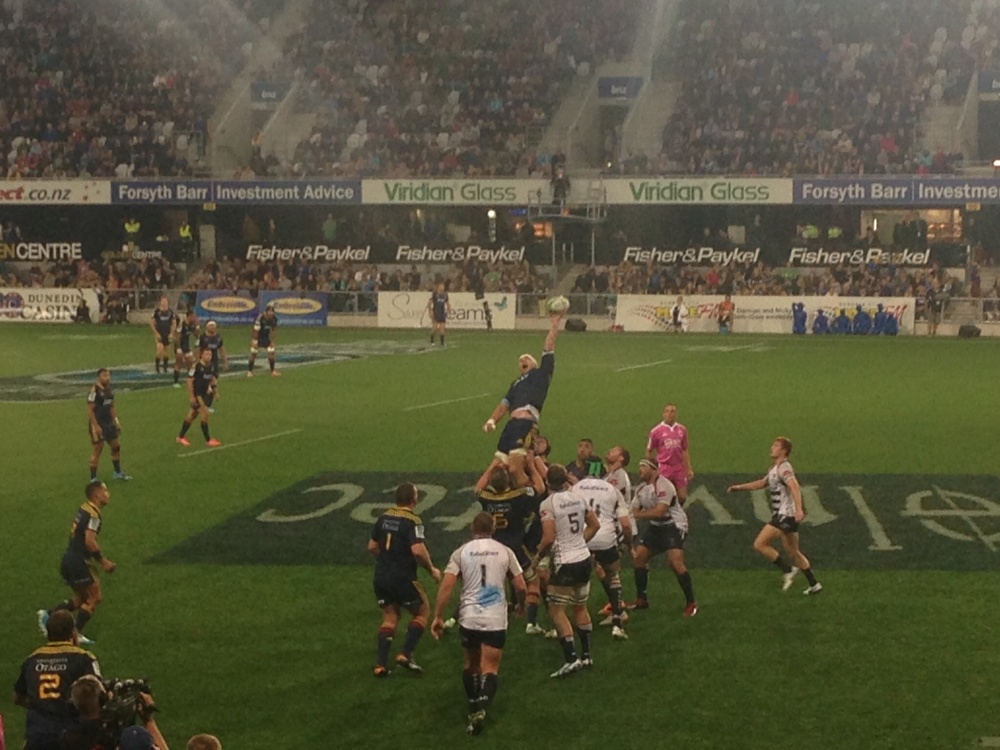 Now signed in at a downtown Dunedin hotel, I felt guilty for not seeing through our backpacking agenda. This was cheating, I thought. Shacking up in a hotel didn’t seem right.

Then, things took a turn.

Entering the elevator we met a guy who looked like he could lift the elevator with one arm, while downing a protein drink with the other. After I smiled politely at him, expecting that would be the end of our chat, he asked us:

“Canada”, I replied, sticking to the abridged version rather than “We’re from 3 weeks of hostels, 50 cans of beans, and more granola bars than I remember eating in all of my elementary school lunches combined.”

“Aw, yeah. Long way then. Must be tired”, he responded.

“Where you from?”, I asked, noting his neck was bigger than my pant leg.

“Originally from New Zealand. But living in Australia, part of a professional rugby club there. We’ve got a game tomorrow night here in Dunedin”, he said.

“Yes.”, I thought to myself. Dunedin was one of the spots around the country that had a professional rugby pitch, and a previous traveller we met said he watched a game here.

We then got off on our floor, wished him luck, and now had something to do in Dunedin.

I played rugby in high school, knew the basics of the game, but never been to a professional match, and had no idea what to expect.

Rose is 0 on both counts. “So, they throw the ball backwards, then run forwards?”.

As I explained that it could also be pretty rough, the game got underway and play moved directly in front of our seats. 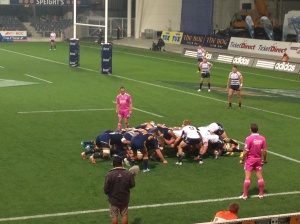 Two opposing players leaped up for the ball after a kick. One came down with the ball. The other came down on his face and lay motionless on the ground.

Rose’s mouth dropped.”Oh my god. I think he’s really hurt”. I agreed. He had the lifelessness of someone who’d been knocked completely unconscious. In a best case scenario.

Then, as Rose and I sat stunned, staring at this guy, me wondering if he’ll ever walk again, while watching medics give him smelling salts and, undoubtedly, asking him what year it was and if he knew what sport he was playing, a big voice boomed out to our right:

Oh-kay. This was a professional rugby match.

The good news was that the motionless player walked off the field – presumably to have an MRI, or, if he was following the shouter’s advice, to “Feckin’ wok it aff, pansy”.

The game resumed, and I got pretty into it – except for understanding all the penalties the referee issued. Not a clue. But, we made sure to throw in the occassional: “AWWW. Are you kidding?” when they happened against the home team.

I also started to imitate the accent of another shouter a few rows behind us. From his appearance and tenor, I was sure he’d bashed a few heads as a younger man on the rugby pitch and seemed like he wouldn’t have been averse to snacking on an ear or two in a scrum.

Before every kick, he felt the lead up was excruciating and would angrily shout:

“COOOOOOOOMMMMEE OOOOONNNNNNNN!”, as if this was holding him up from catching a train to perform life-saving brain surgery.

While I got a kick out of him, Rose was watching another guy, who was getting progressively drunker, and would leave the aisle frequently (for more beer or to offload it in the bathroom?) – and when he’d return, would completely forget where he was sitting so he’d walk up and down the stairs for a minute or two until his friends would spot him, wandering aimlessly, and wave him over.

It must have happened five times. It was hilarious.

On the field – the good guys won, the home team: The Dunedin Highlanders.

After a walk around the rest of Dunedin, Rose and I decided to head to our final stop in New Zealand: Kaikoura, the home of whales, dolphins, seals and our last, sunny walk. 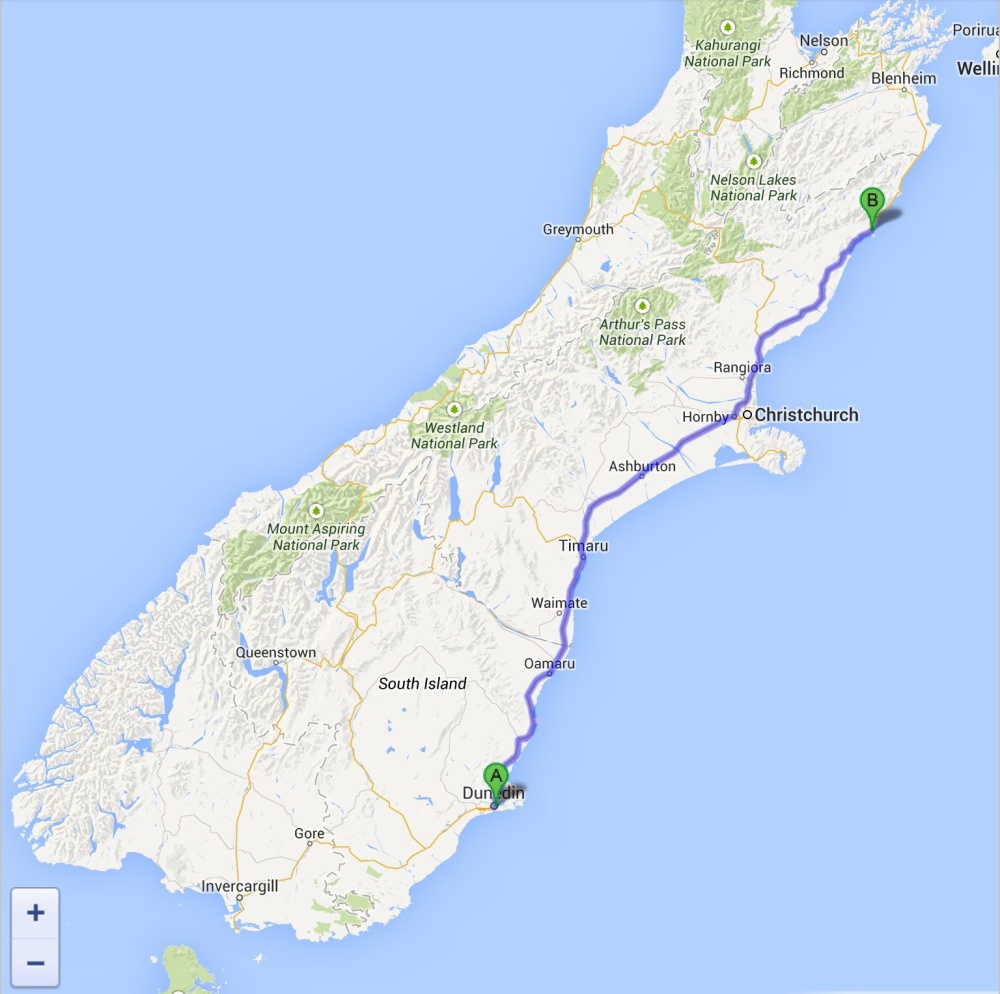