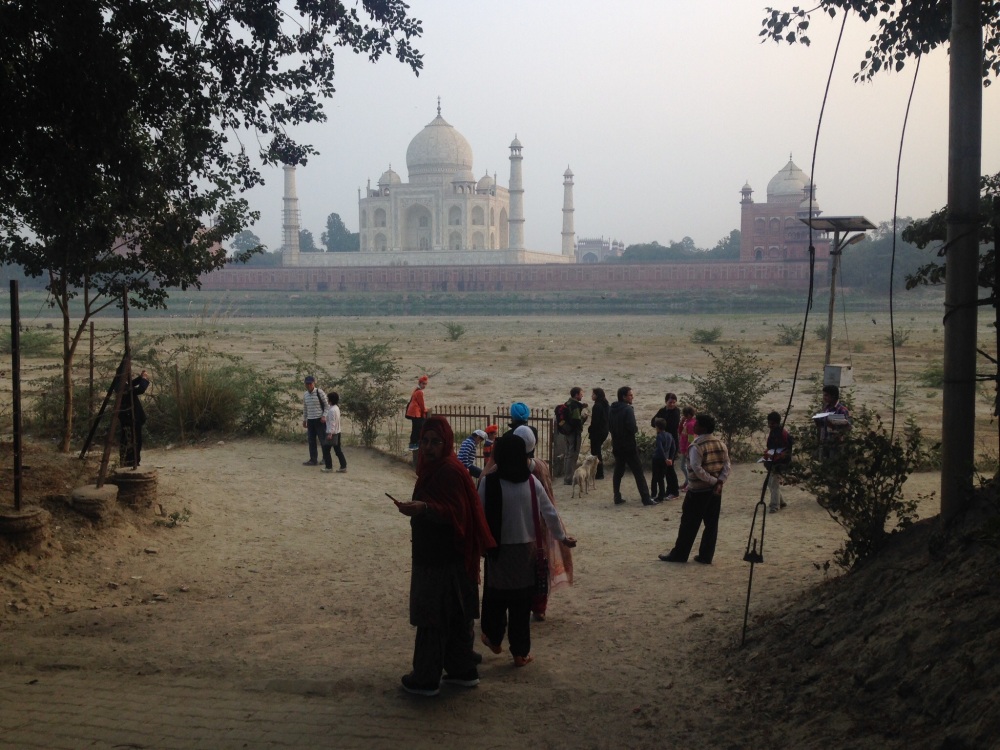 This is the view from the cheap seats.

It’s the main reason over 3 million tourists visit Agra every year. Though it was once the capital of India in the 17th Century, Agra now draws people in thanks to the Taj Mahal, which, at this point, has to qualify as one of the most recognizable monuments in the world. Everyone has seen images of it a million times in one form or another, which, of course won’t stop me from adding to the pile with more shots in a minute.

However, amazing as it may sound, there is more to Agra than the Taj Mahal. I’m not saying that the other stuff is better, but merely that it’s impressive in its own right, and without the Taj Mahal running things, would be a worthy trip to see on its own.

This is what I’m referring to: 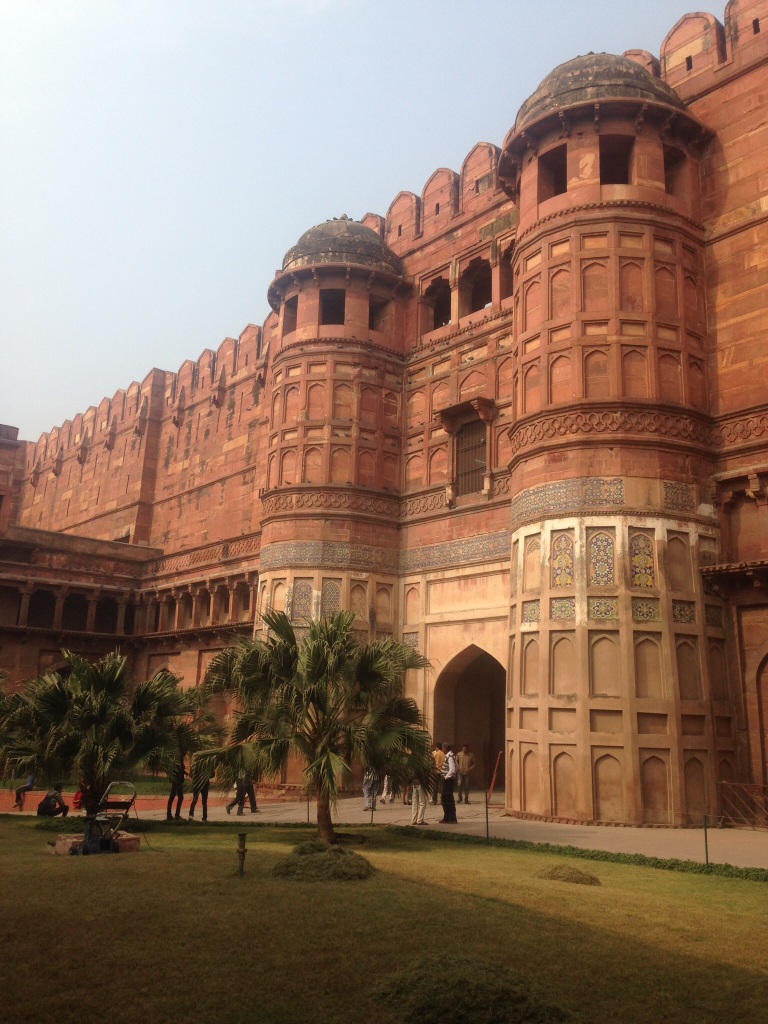 Agra Fort. It’s similar to the Red Fort we saw in Delhi inasmuch as it’s a fortified enclosure with palaces inside it.

However, next to 254 acres in the Red Fort, this one is a starter kit: measuring in at only 94 acres. So, we did our best to find room in this shoe closet to move around, roaming from one palace to another with 50 foot ceilings that it soon became hard to understand how an Emperor could live here. 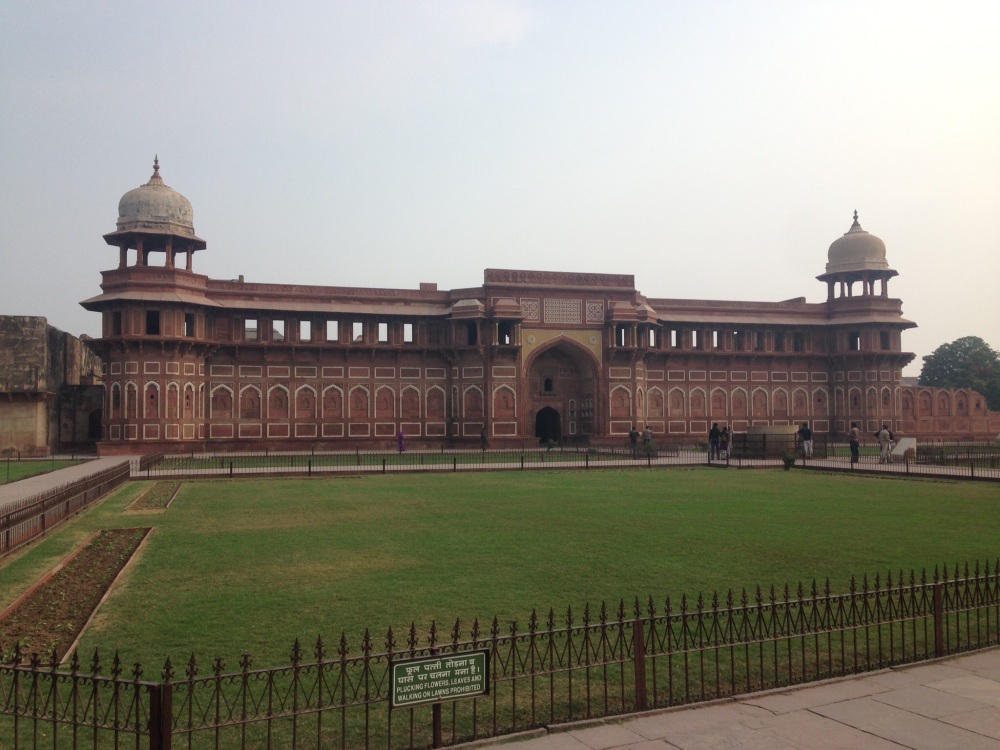 Interestingly, there’s evidence that the fort had been around since the 11th Century, and grew accordingly with each successive conqueror. Shah Jahan was the Mughal emperor who supersized much of the place, replacing palaces with white marble: 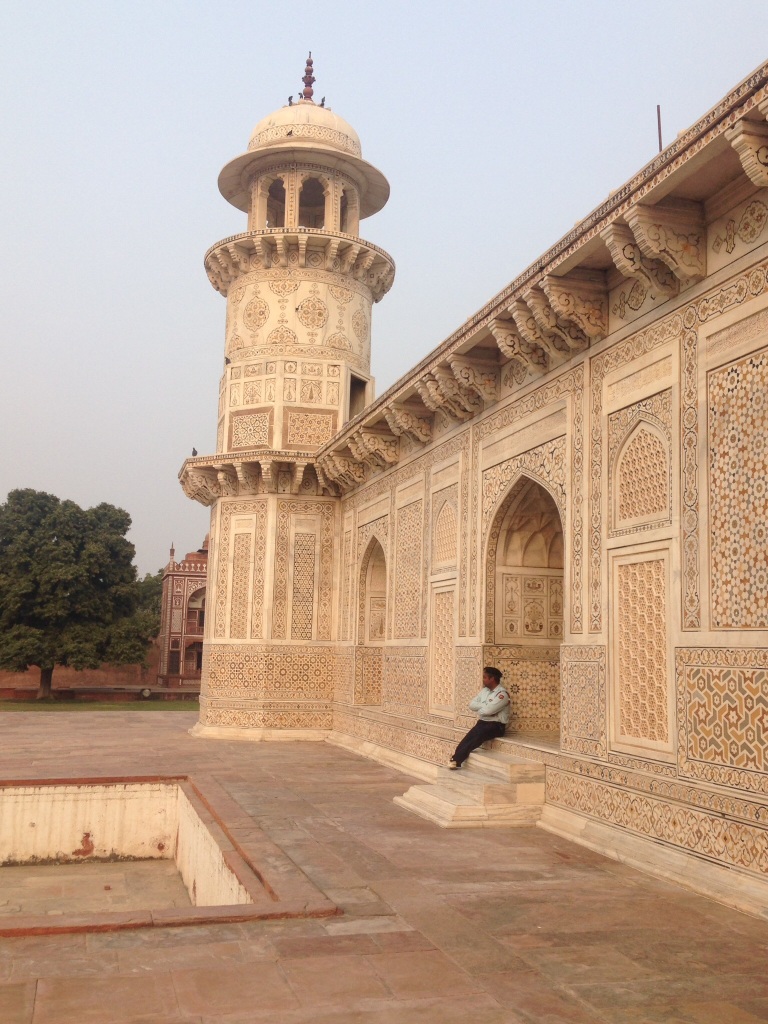 A design touch which he also carried across the river to build “you know what” that on clearer days can be seen from Agra fort (you can sort of make out the contours in the clouds). 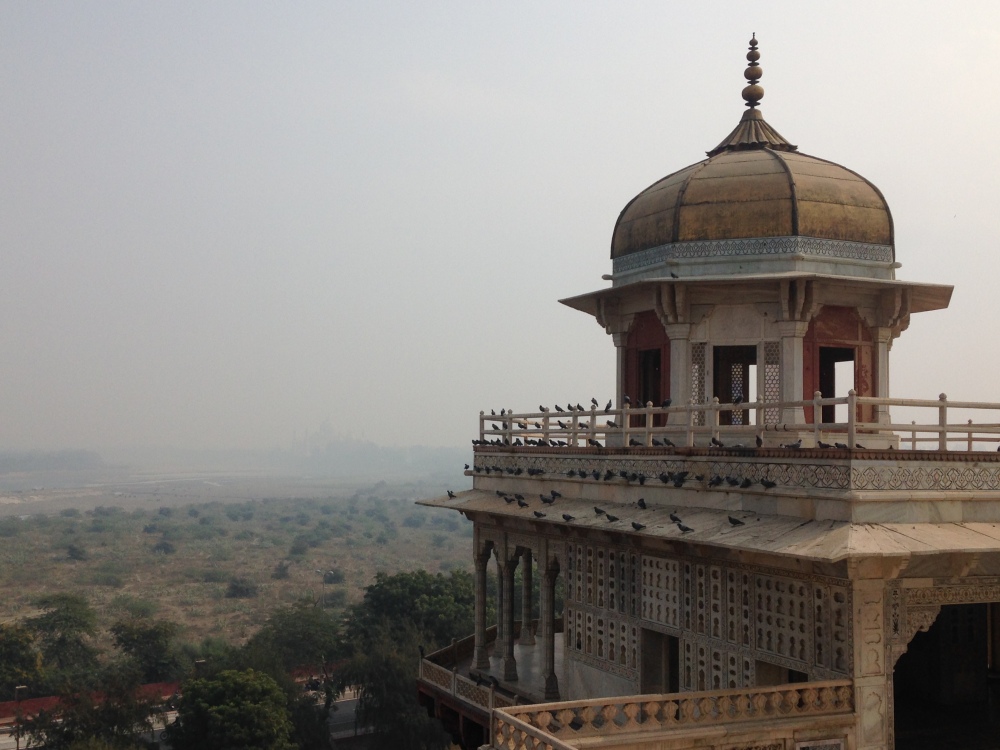 Also, as legend has it, Shah Jahan could spot it from his internment at Agra Fort where he was imprisoned by his son who was vying for his crown. Though it’s been couched as a Robin Hood act by some tour guides, saying his son did this because Shah Jahan had bankrupted his Empire building the Taj Mahal, and his son wanted to rein him in. Whether for personal aggrandizement or benevolent rule or somewhere in between, je ne sais pas his motive. But there you go.

Anyhow, we toured around the grounds seeing more: 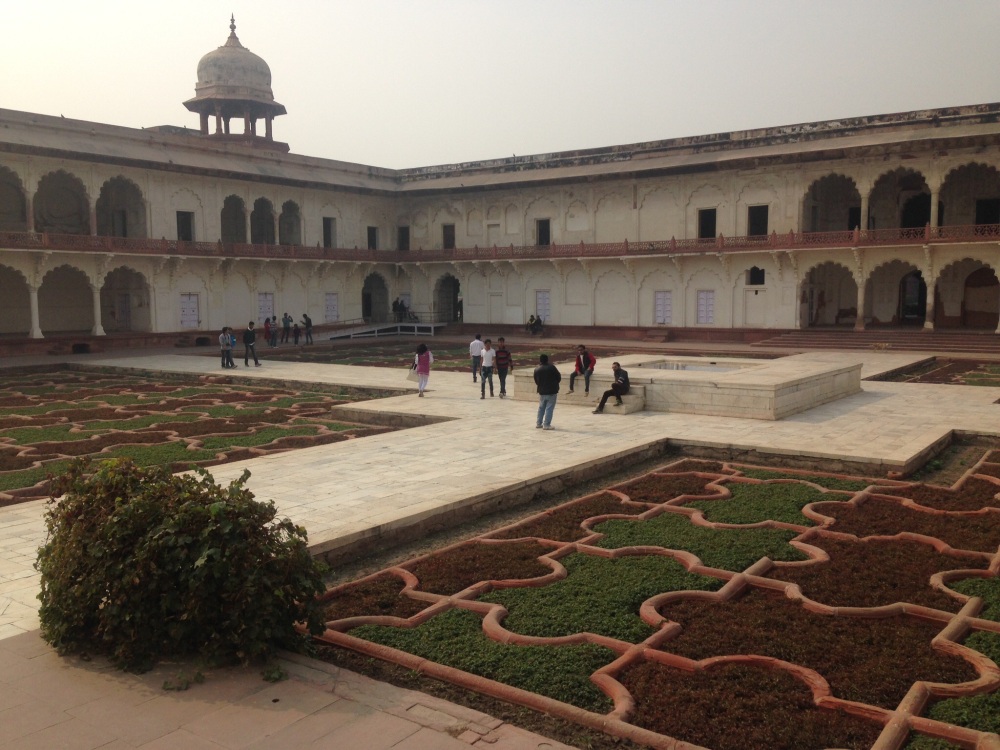 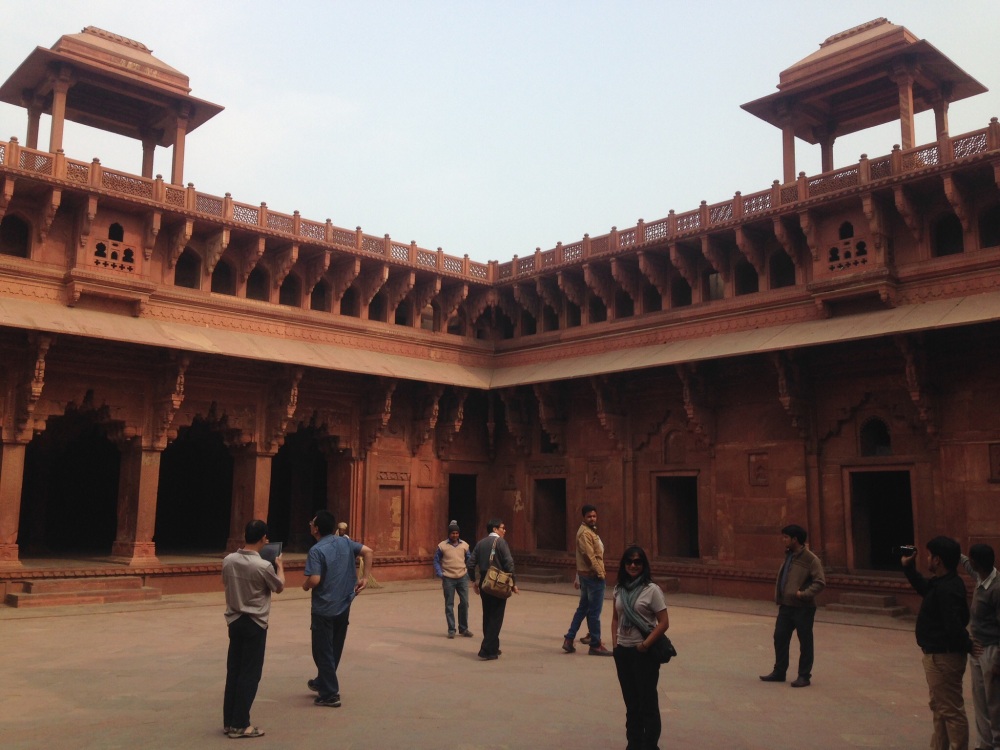 And more buildings, each one a mansion in its own right. 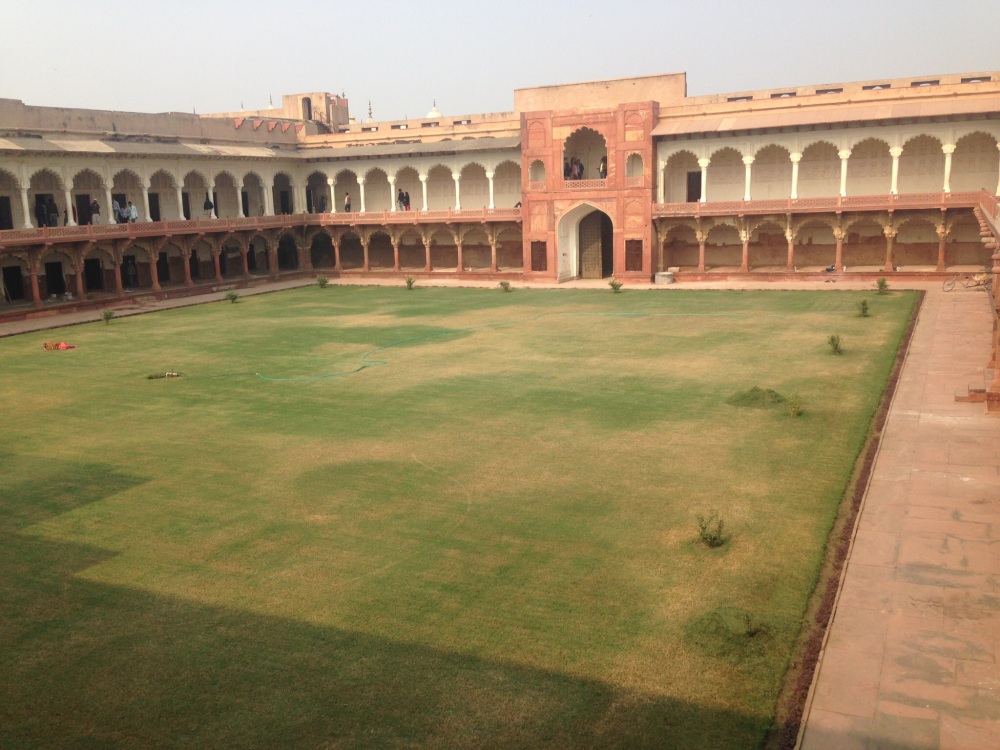 After leaving, as part of the deal with our driver, we agreed to stop at a carpet shop, where if we were to buy something, he’d receive commission. Buying a carpet was the last thing on both our minds, but thought it might be interesting enough to see how they’re made.

We were introduced to the operation, which is a slick tourist assembly line run by canny employees who bring tourists in, offer them a drink, and take the next hour trying to seduce them with words like “cashmere” “double knit” “handwoven” while unfurling carpets one after the other in front of us with bright colours and “authentic designs”.

Hahah, we thought. “I know your game”. And then, within two minutes, we’d fallen face-first under their spell.

Rose and I looked at each other and began rationalizing: “YEAH, that carpet would look good in the hallway” – “or if not we could put it downstairs”, essentially we began arguing against the idea of NOT leaving with something, because, after all: “It’s good quality”.

Not taking a second to think that I know absolutely nothing about carpets, and am repeating verbatim what our salesmen has just said.

Thankfully, after a small break in the proceedings, Rose and I came back to earth and broke the spell, realizing that we hadn’t lost our ability to think critically, and decided to leave the pretty things on the shelf.

The salesmen running the show were so convincing, if they ever wanted a change of career, I think they could be the best hostage negotiators India has ever seen.

Of course, given how close we were to handing over our credit card, and seeing the next group of tourists coming in the door as we left, wide-eyed as we were, it was clear they already make a happy living doing the opposite: convincing tourists to pull the trigger.

And speaking of doing that, here finally is the start of the main event, which started out okay under cover: 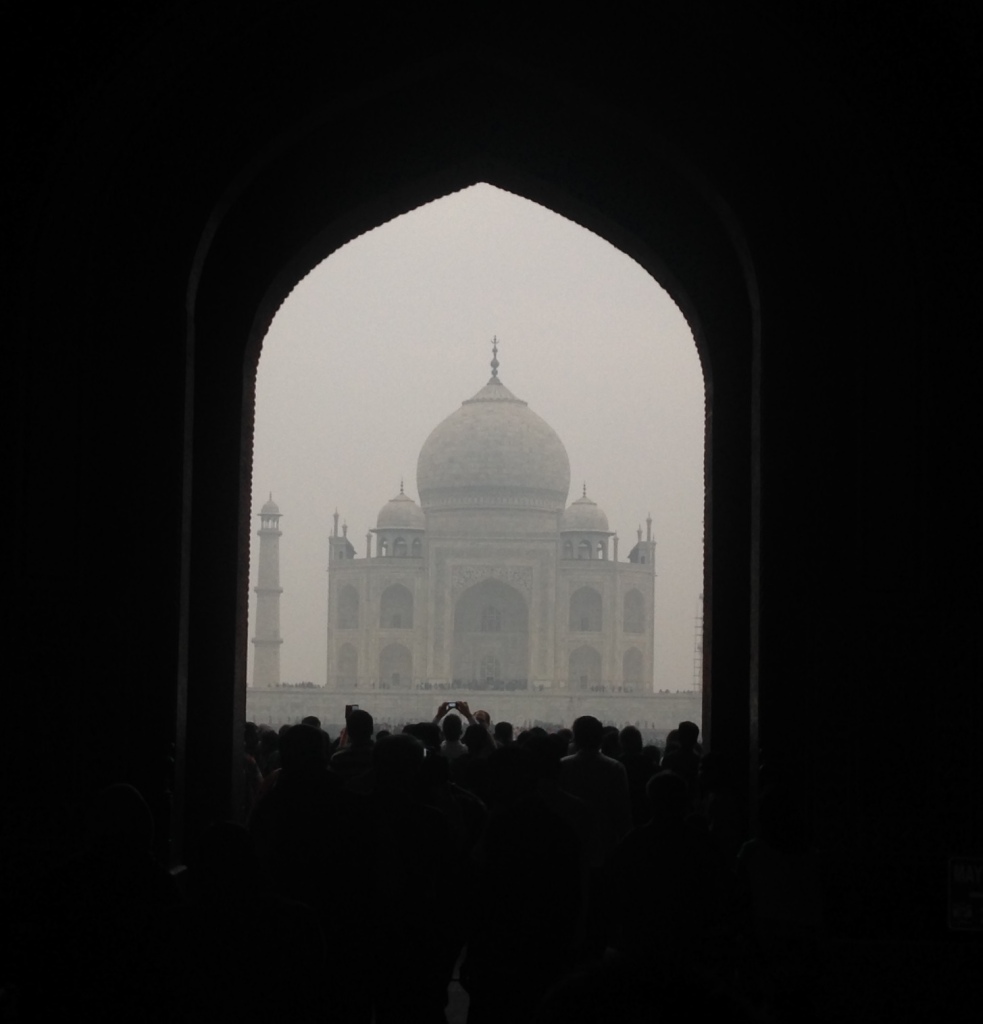 But soon became a downpour with water piling all over the place. 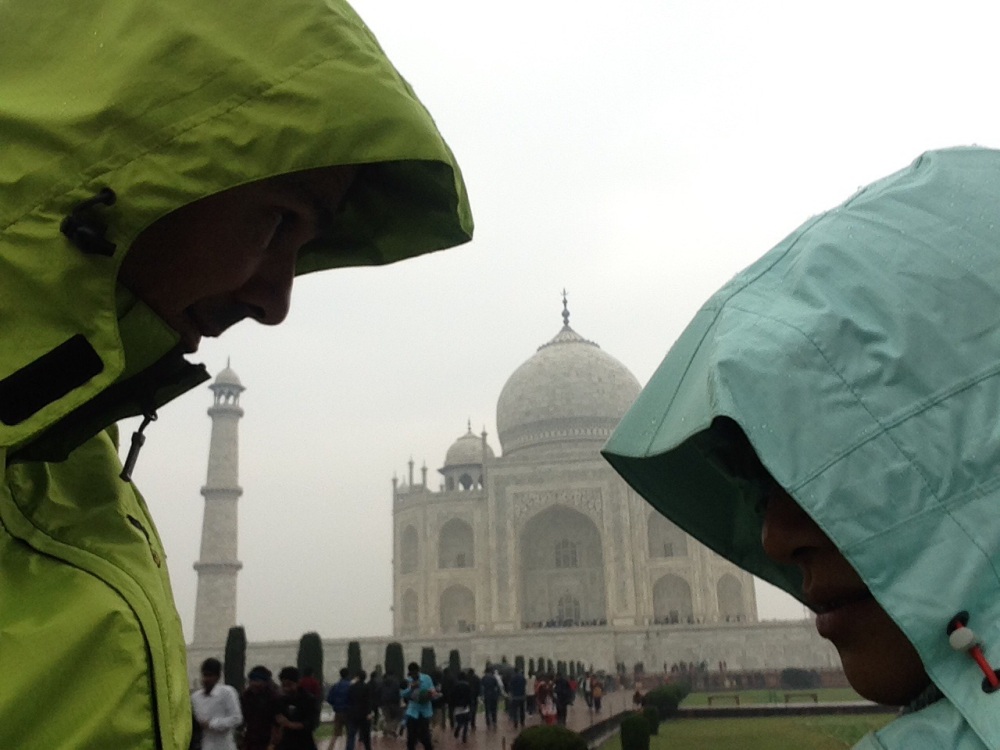 Nobody is allowed to wear shoes inside the Taj Mahal, and people line them up at some stairs on the way up. Now, however, all these shoes were underwater, and we didn’t want to add ours to the list of the drowned. So a soaked entrepreneur, seeing an opportunity, came up to a group of us with fabric shoes that mob hitmen wear in the movies.

Done. We suited up and made our way in, where up close the design in marble and the calligraphy was really amazing: 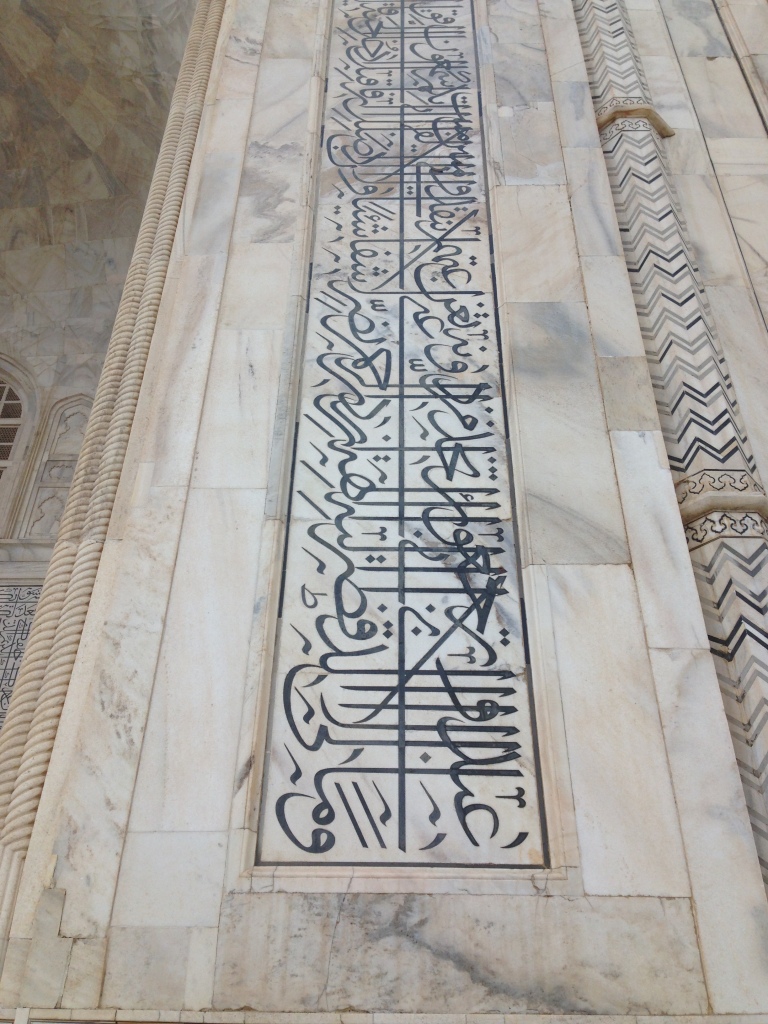 I expected to be a bit jaded by the whole thing, wondering how it could possibly live up to its huge reputation, but despite the crowds, and the gushing rivers of rain: it did. I thought it was amazing to see. 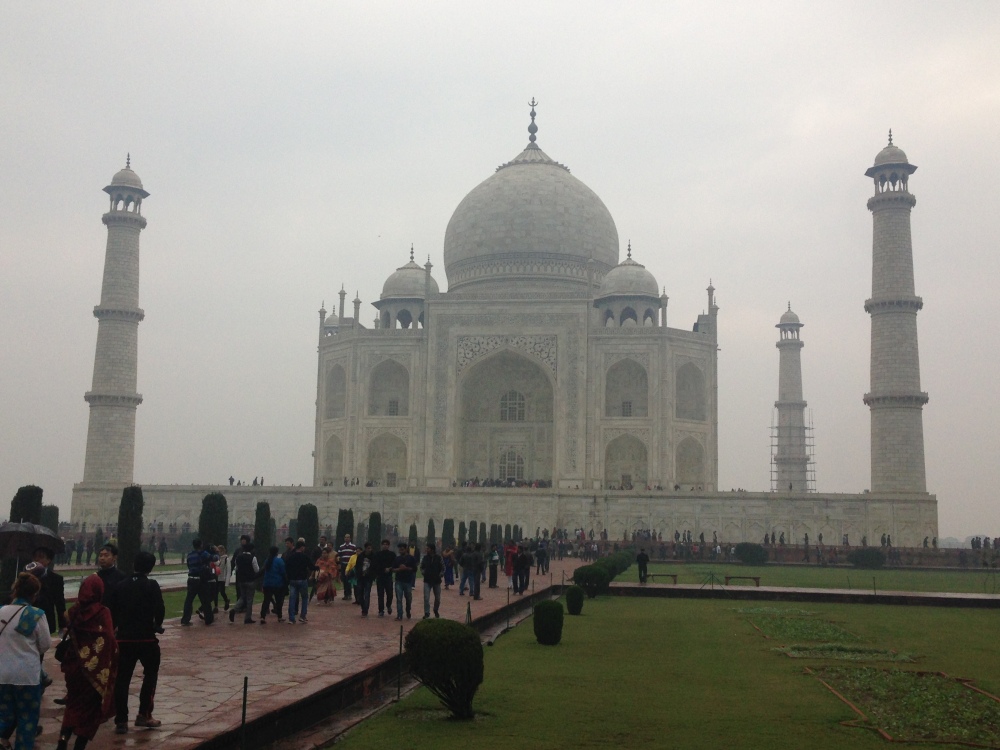 The scale of it is huge, like most things we’d already seen. Many of which had been built by Shah Jahan who commissioned the Taj Mahal as a mausoleum for his third wife, where, unplanned to him at the time, he was also interred after his death.

Apparently it took 22 years to finish, and was once more sparkly than it is now, having been plundered of jewels encrusted in its side by the British in the 19th century. But the nuance was lost on me: even with cloudy skies the white marble surface had a glow: 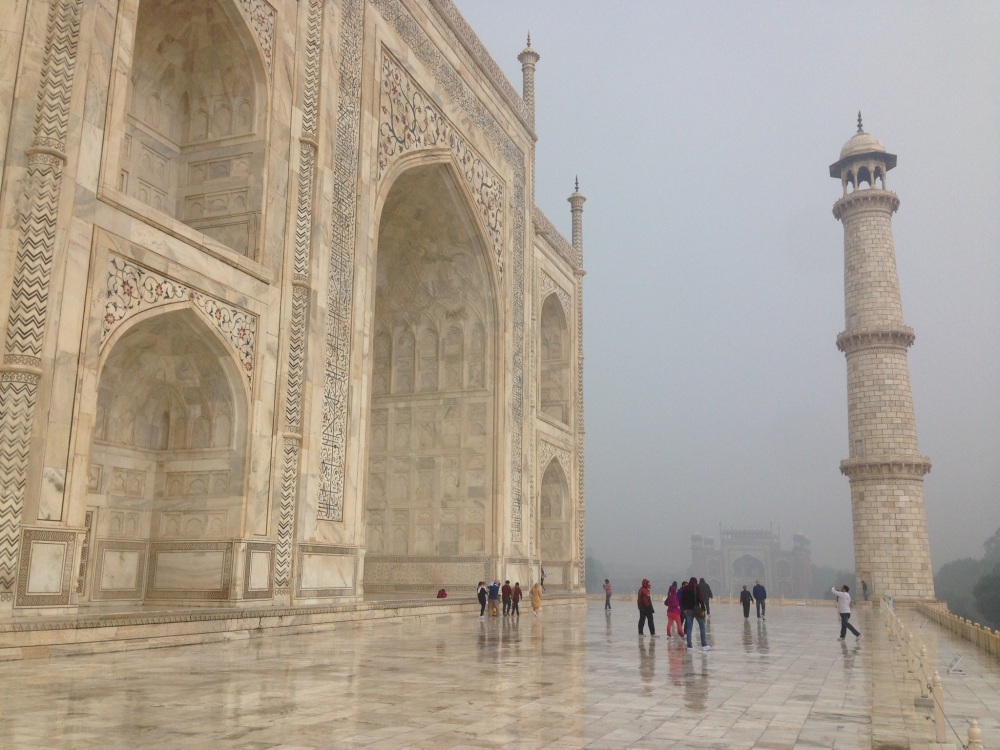 At the entrance there was a huge scrum of people, pushing and shoving to get their photo in front of the fountains, leading up to the Taj Mahal. Apart from our best attempts at selfies, we asked someone if they could take a photo of us, and this is how it turned out: 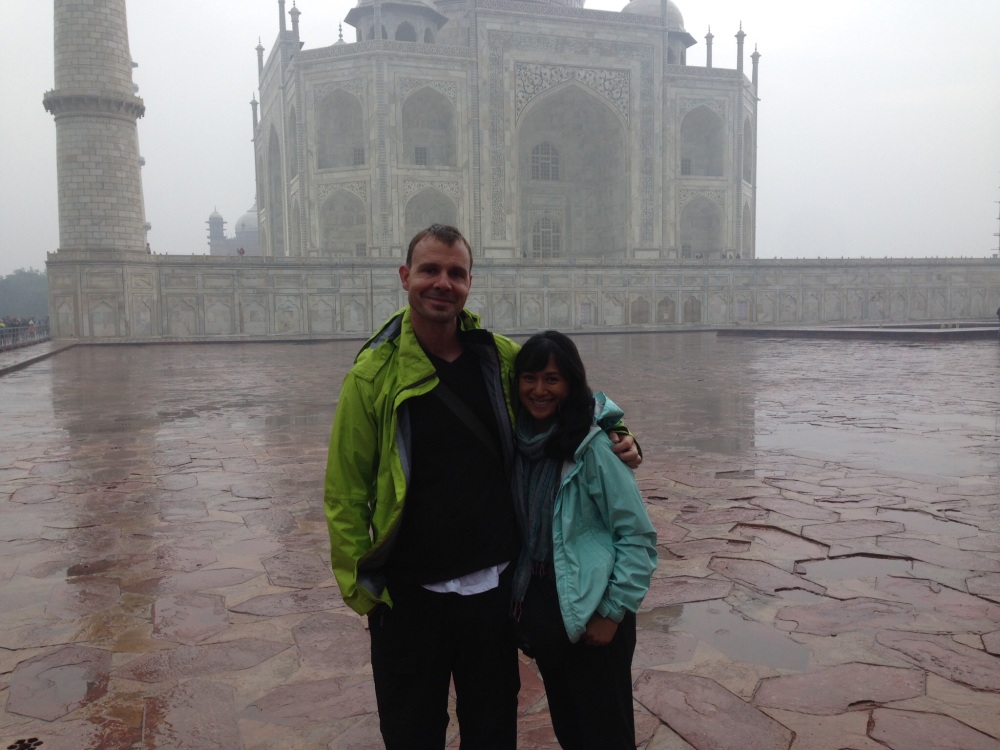 Maybe I should have been more clear?: “That big massive ball on top. Could you include that too?

In any case, we had a last look: 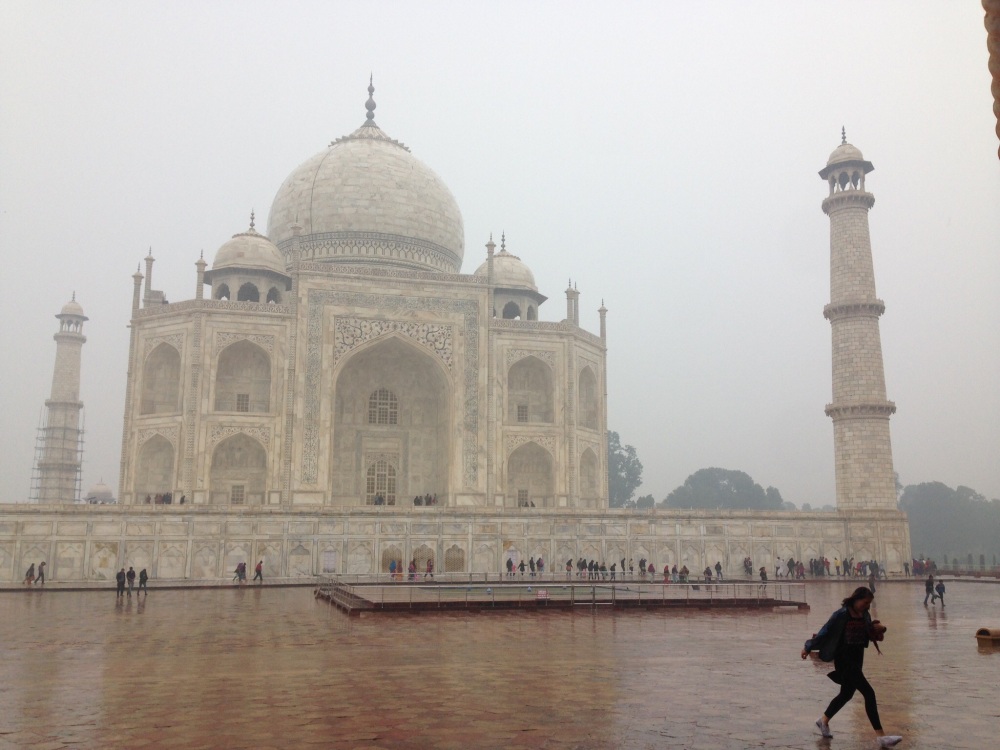 And dragged our waterlogged selves back to our guesthouse: 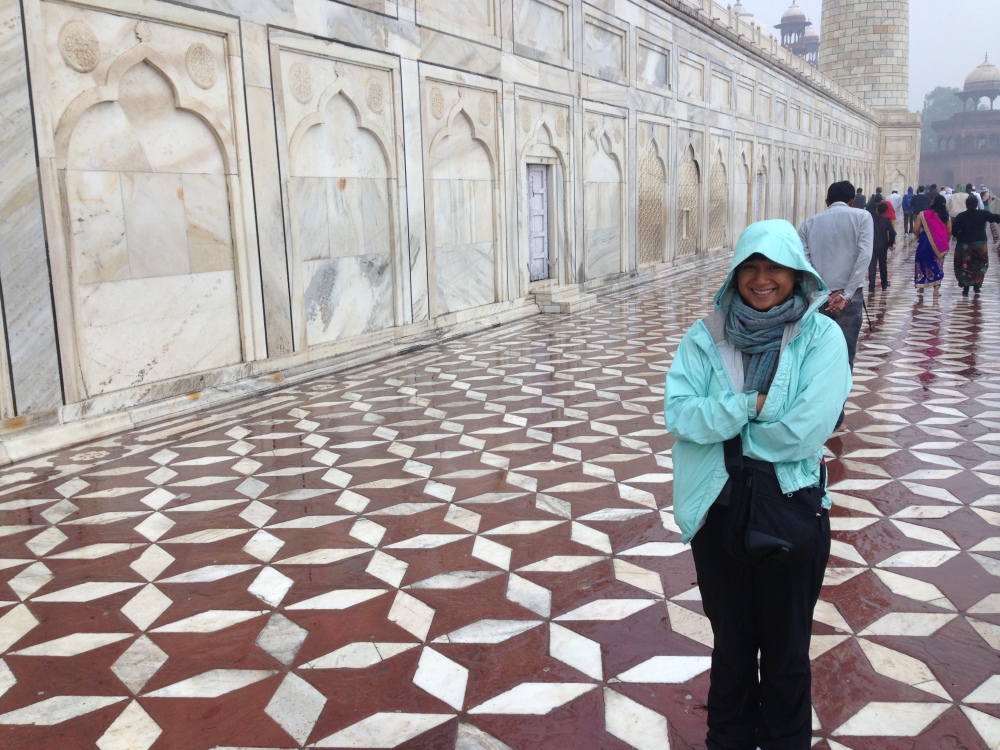 After quickly drying off, we lined up with monkeys at the train station to catch our next ride. 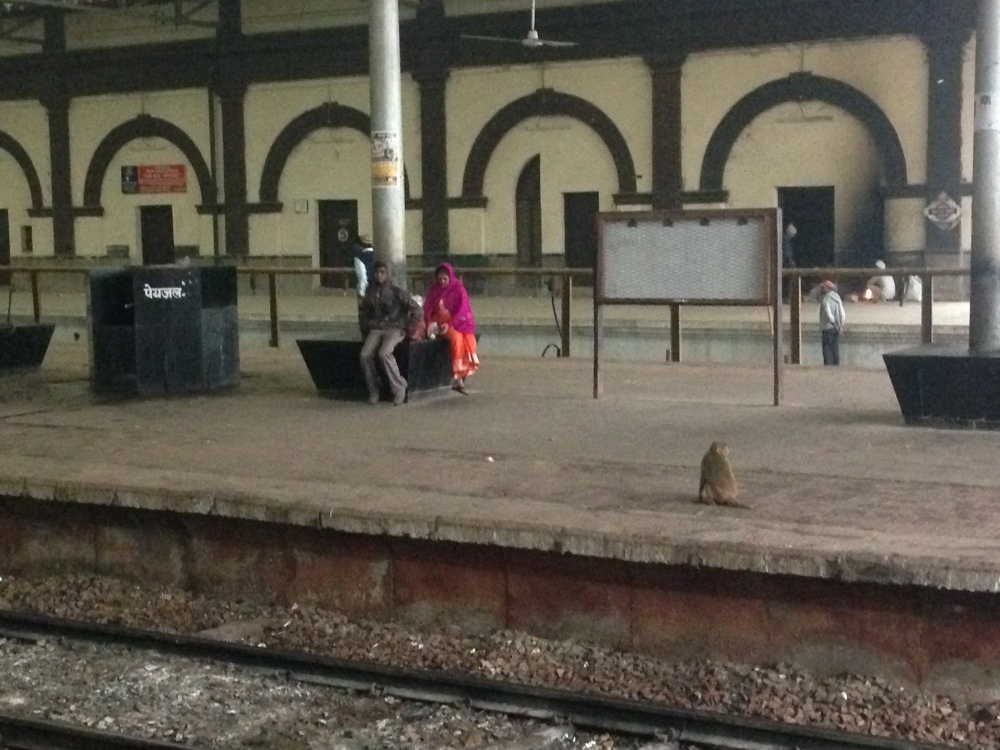 This time an easy one: six hours to Jaipur. Popularly known as the “Pink City”, it would be better known to us as “Can we go now?”.