* read to the tune of Everybody (Backstreet’s back)

We travelled only 26 hours plus to see him. You’d think to garner this much attention he’d have done something. But Buddha did the opposite: he literally achieved nothing.

An accomplishment that from a particular point of view might stir the heart of lazy bastards, but, from the point of view of the early Thai empire, stirred visions of a massive statue to commemorate his amazingness for sticking a big middle finger at the material world.

Ok, the Thai engineers decided to keep his middle finger down. But, look at those fingers. Oversized Toblerone bars don’t stand a chance.

11 metres wide and 15 meters high, Wat si Chum (aka. Big Buddha) is the biggest statue on display here at Sukhothai Historical Park, but it’s only one of over 193 ruins scattered around the place.

After our tuk tuk, train, bus odyssey the day before, Rose and I changed things up with a new addition to the transportation roster: 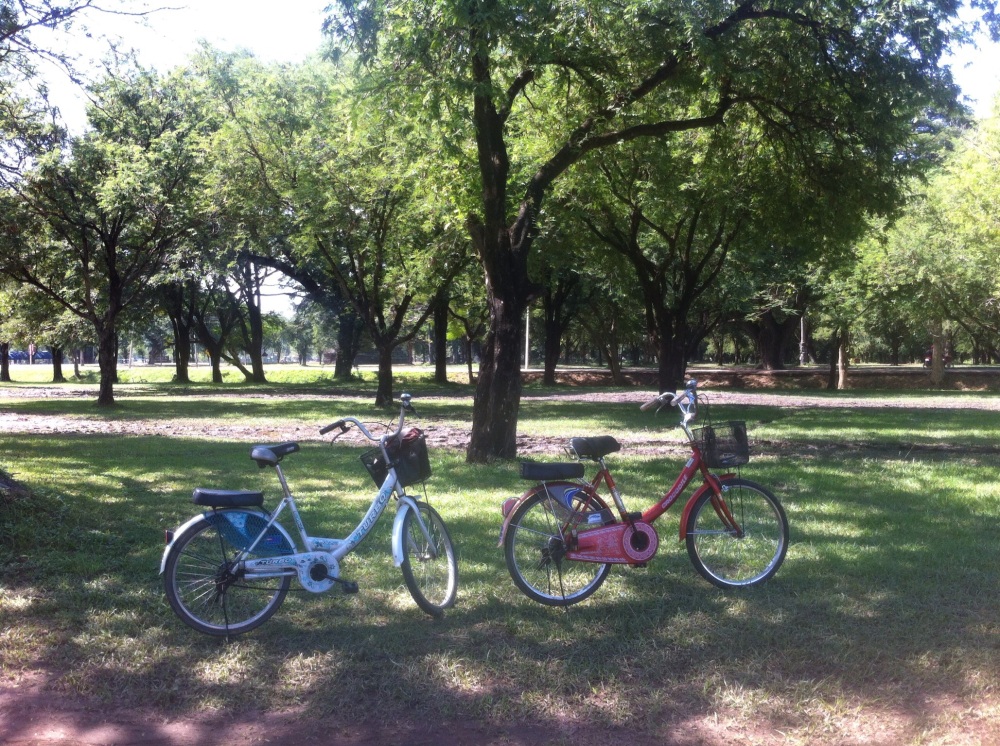 Also a UNESCO site, Sukothai Historical Park is accessible on bike, which made our tour easy, but also helped us slow down a bit from our normal hurtling caravan of activity that operates at speeds a lot higher than 5km/h.

I thought the setting was really tranquil – (For Buddhist ruins, a handy compliment) with few tourists around, and Rose and I took advantage, meandering along, and finding shade wherever we could. 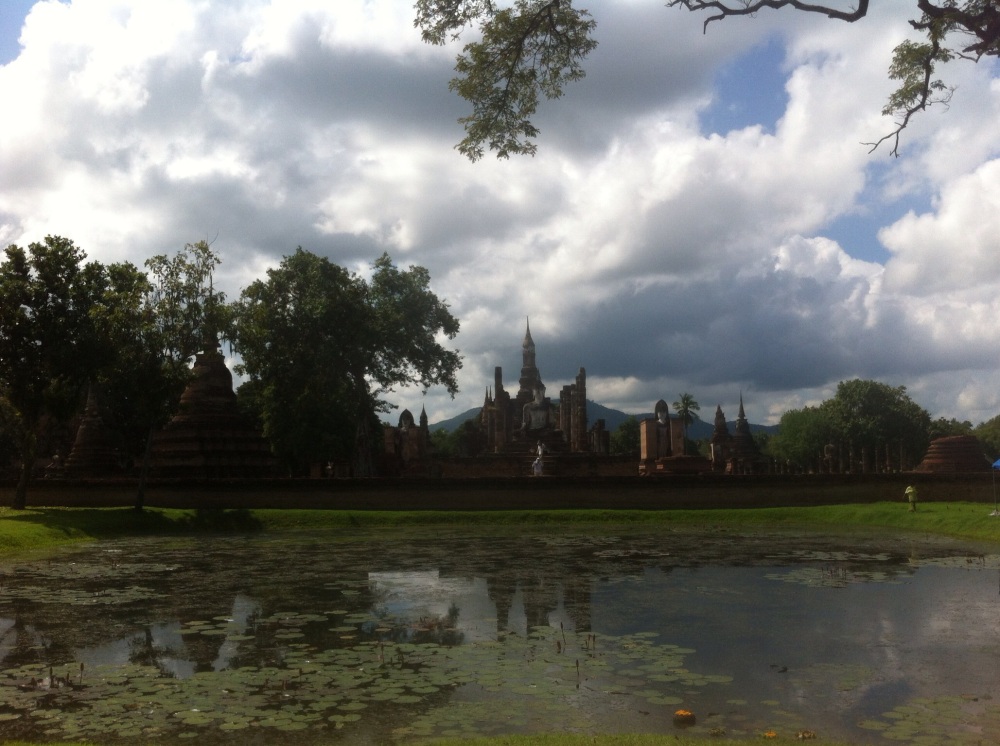 Since we no longer had the help of a big body of water to cool things, we’d returned to the sweat gushing days we’d experienced in Laos and Cambodia (as you can tell from my photo with Buddha above).

However, one highlight that was worth the sweat was this stupa – Wat Sorasak.

Elephants figure heavily in Thai culture, once used in parades to project power and majesty during royal ceremonies and also in more practical terms, as construction equipment to clear land. From a Buddhist angle too, elephants were seen as protectors.

A worthy ally I would think: but sadly not one for us on this day, as the big beasts were no match against the sun that by this point had crisped Rose’s skin into a deep mahogany, and mine into the skin of a Yukon gold potato.

We pushed on to a Hindu site – Wat si Sawai one of the oldest in the park.

Interestingly, similar to the blending of Buddhism and Hindu which we saw in Angkor Wat, next door in Cambodia, this one had similar style, which was moving away from Khmer architecture to a more Thai style – reflecting Buddhist themes.

Of course, Buddha was in abundance everywhere else: 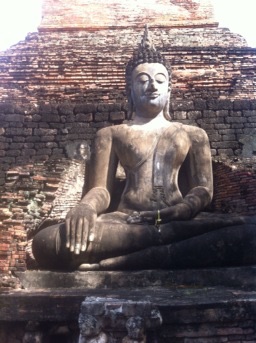 We spent a couple of days touring the park, and met another Canadian couple, who had been visiting for five days. While 800 year old statues are their own draw, I’m not sure we would have spent another three days exploring them at length.

However, we learned, neither was this couple. After touring the ruins for a couple of days, they they’d supplemented their days by going birding. As we roamed through ruins taking photos of everything around us, they also walked through the ruins, but were only interested in them if a bird was using one as a pit stop.

After one of them declared: “There’s a bird over there on that fallen pedestal” – I scrunched my eyes but didn’t spot anything. Seeing my wrinkled face getting nowhere, the same birder offered me his binoculars, and I had a peek.

As he sat over my shoulder, holding his breath in anticipation of my seeing this bird, which had now from all the preparation taken on mythic status, I expected I’d be looking towards some ornithological marvel: a toucan, a condor, maybe a vulture?

Sure enough, it was a little bird perched in a way that I had completely overlooked it.

“Oh right. Yeah I see it”, I replied, doing my best to sound excited.

“It’s got a nice colour”

“Yeah, blue”, I said, maybe a bit too atonally.

I handed him back his binoculars. While I appreciated their enthusiasm, it was clear that I have a way to go before I get the same thrill.

Rose and I toured around a bit longer, once again tipping our hat to the master of the big nothing, who just to underline his empty contribution also seems to be forming the number zero with this fingers in the image below:

We eventually made it back for our third shower of the day, had a really good dinner at the guesthouse where we stayed, and plotted our next move. A visit to Chiang Mai and more elephants – but this time the real thing.