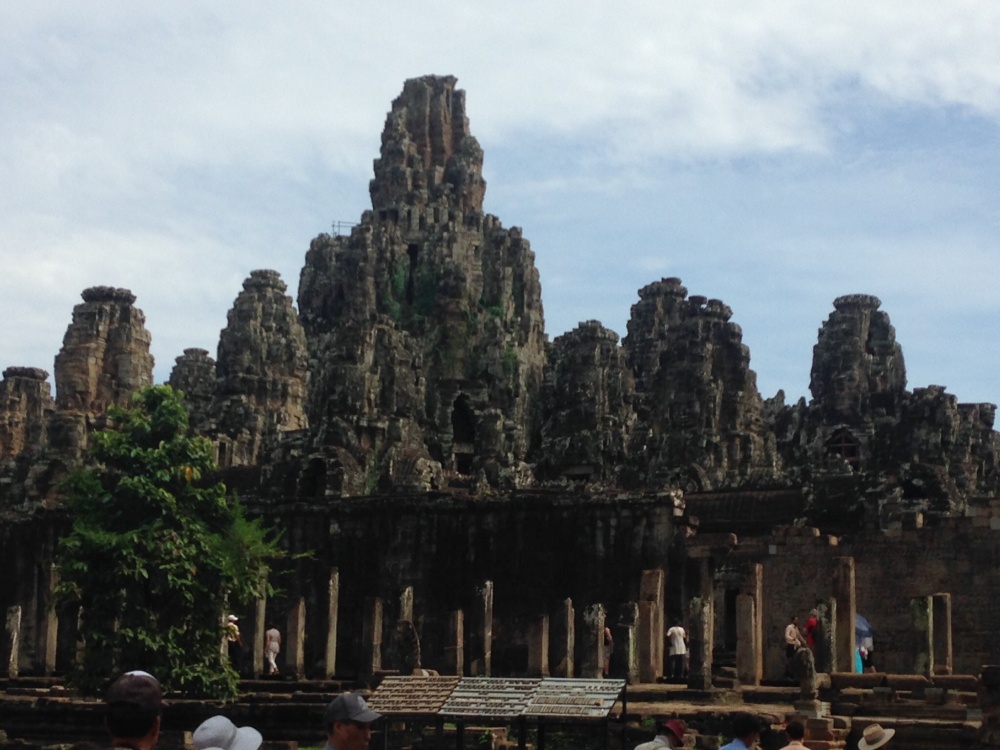 Angkor Wat is like Ben Affleck. It gets top billing – it’s showcased on the Cambodian national flag, gets all the buzz – it’s the temple most people talk about – and it gets most of the attention – when people arrive here, it’s usually the one they want to visit.

In contrast, Bayon temple, part of Angkor Thom is more like Ben Affleck’s brother Casey. It’s a younger temple, built by the King after Angkor Wat who was into Buddhism, it’s more quirky- from massive Buddhist faces etched into rocks throughout:

And, personally, after walking through it, I found it more varied and interesting, even though it’s not on the national flag: (I’m sorry Ben. I’ll still see you in Batman. But, I just didn’t think Argo was as good as most people thought it was. Admittedly, that’s not entirely your fault. But Daredevil? Your character was blind in that movie. I think a lot of moviegoers who went also probably wished they were.)

Angkor Thom is the name of the city enclosure that the second King built around a series of temples, Bayon being the main one, along with a few smaller ones, and other symbolic sculptures.

The entrance is dramatic. Two long rows of soldiers flank either side of the bridge, both holding a massive cobra, whose head comes up to meet you at the end. We were told that the left side of soldiers were in fact, Gods:

who were counterbalanced on the left side by Demons:

Rose took a photo on each side, so no one got the wrong idea.

In the entrance way, we came upon our first example of a four headed Buddha – designed so that each one was looking in a single cardinal direction, keeping an eye on things:

On the Bayon temple grounds, there’s a huge, sculpted wall detailing daily life in the 1200s:

Interestingly, although this second King had decided to lean towards Buddha, he still included sculptures and representations of Khmer culture, like the Apsara dancers, ubiquitous throughout:

But, for me, the big fixation were the massive Buddhist heads. I’d shoot one side:

then see more on the other, and kept going:

We even climbed up to a level, which put us face to face:

I wasn’t the only affected by the younger Affleck temple. Matt, normally a stalwart against sidewalk scams, hustles and touts, upon entering a darkened corridor in one area of the temple, was offered an incense stick to stick into a shrine, along with an orange wrist tie, which he was told: “GOOD LUCK. VERY, GOOD LUCK.” – went ahead with it, and even bought me one (of which I’m still wearing, by the way. Thanks Matty).

In my last post, about Angkor Wat – for once, I didn’t talk about the heat. It may have been, because we saw that one at the tail end of the day, and I was getting used to living in wet clothes. But, this time around, it was back. Full force, front and centre, and up and down.

Here’s my imitation of a chicken breast at a buffet, under a heat lamp:

I find, under these intensely hot conditions, I get painfully self conscious, thinking – ugh, my shirt’s wet, it’s gross, and then I have these reactions, in this order: why didn’t I bring a back up shirt? Then two seconds later: wait it’ll just end up as soaked as the one I’m wearing. Ugh, maybe they have a tourist shirt nearby I can buy just to get me through this? Then, in the same manner as last time, in two seconds, realize that unless the shirt is waterproof, it’s gonna turn out the same as if I had brought a back up shirt.

From here, my main thoughts are: I want to leave, burn my clothes, bury them and start over. I think I’ve seen enough Buddhist faces now.

Invariably, it’s at this breaking point in my mind when I see someone, as equally soaked, and I burst out of my self-involved bubble, finding partnership with my drenched brethren.

In this case, it was a guy whose shirt, honestly looked like he’d jump in water, and was dripping after a swim. But, what struck me most about it, the guy seemed to be maintaining his composure. Unlike me, he wasn’t self-consciously pulling his shirt off his wet skin, wiping his forehead, or making any attempt to try to camouflage his deluge.

He didn’t give a shit. And, I thought: “Good for him. Maybe someday. But right now, I just felt a drip start from my shoulder blades, make its way down my back, and finally, unceremoniously, drop down the back of my pants. I think I’ve seen enough for today.”

I think, most of our Team Canada were also feeling the effects of heat, and wanted relief. The good news was that we had an antidote: air conditioning in the mini-van we toured around in. Interestingly, we met other tourists later who had done temple tours on foot, and admitted they didn’t explore the temples as fully, because they wanted to get out of the heat.

While the air conditioning wasn’t exactly the fiery pit where I had hoped to toss in my shirt, it was at least a stopgap until I could hang my sweat-soaked, soon to be fetid shirt outside our door at the hotel as insect repellent.

We made our way out, looked behind for last look and caught this guy making the rounds: 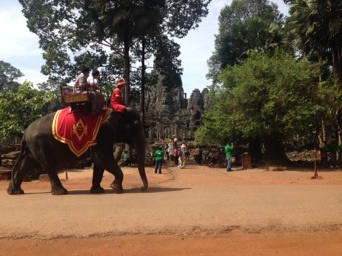 Finally, after settling in, this brought an end to our day. And, I realize now that you may be disappointed that I’m talking about two celebrity actors, when I’ve been teasing about Lady Lara Croft for the past two, maybe three posts? It’s like a TV show that leaves you at a cliffhanger, so they can jam in an ad, while you’re left pacing.

I’m sorry. I’ve said before, I hate it when people do that, and lookee-see what I done did.

She’s next. I promise.