This had been completely invisible. Hidden behind a wall of rain and cloud the day before.

It was as if a window blind had been lifted. The extra heat was also welcome, not least to warm up from the last 26hrs of cold, but to dry the path, much of which had turned to mud.

On this morning we first heard rumours about an avalanche. Thakur had been in touch with his sister in another part of Nepal who had explained there were hundreds of people missing at the top of the Circuit. Rose and I were both shocked: we’d been there five days earlier, and the conditions were amazing. Now we worried someone we knew might be among the missing. (Little did we know.)

It hung over our walk for the day, and many of the trekkers we passed or ran into would ask:

“Did you hear about the avalanche”,  followed by questions about whether we knew any more details.

Hearing of the avalanche higher up, I began to worry about landslides for us. It was known to happen from time to time in this area: two days before, Thakur had pointed out a scar on a big hill where a massive chunk of land had separated from a mountain and slid down hill.

We soon walked past evidence of the storm with branches broken all over the path plus mudslides, of which this was probably the biggest: 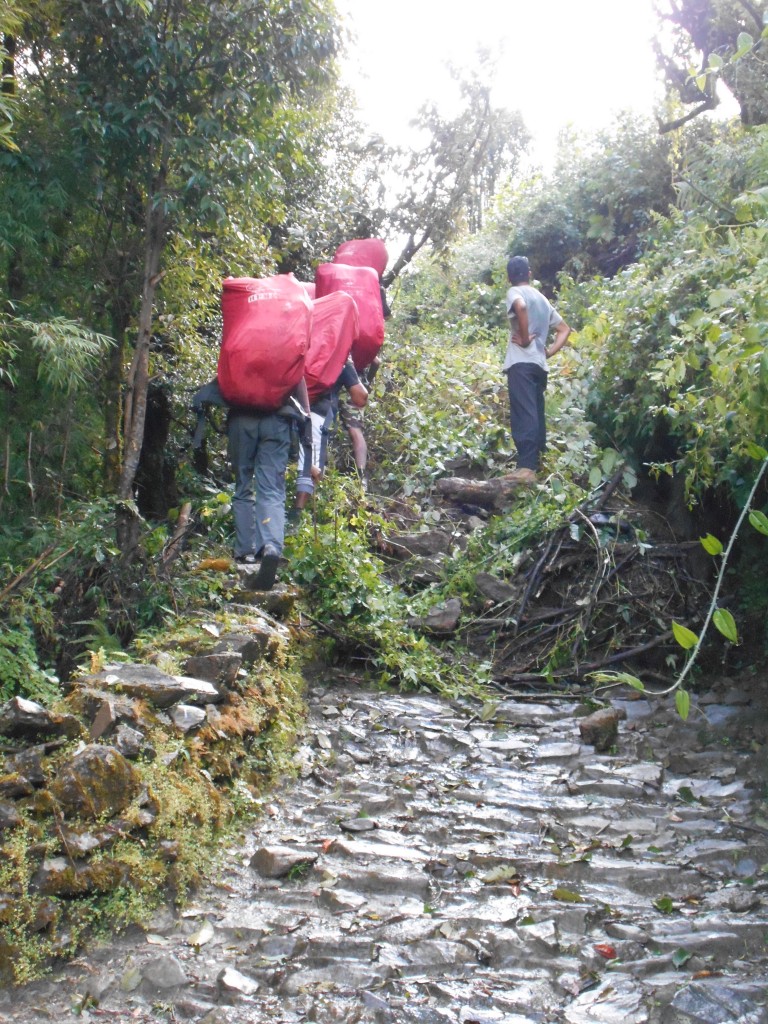 The walk was also difficult for its own reasons: namely, heading 700meters higher in altitude to a village, Ghorepani, that was at 2860metres. After a day’s rest of dancing, popcorn and what felt like bottomless bowls of dhal bhat, we expected to be primed for a climb.

In reality, we had more in common with this dog:

As before on past climbs, we entered into a shuffle step approach where we rested 2 minutes for every 20 steps we took. Unfortunately, as the day endured the sun didn’t – making it an overcast slog that alternated between humid and cold. 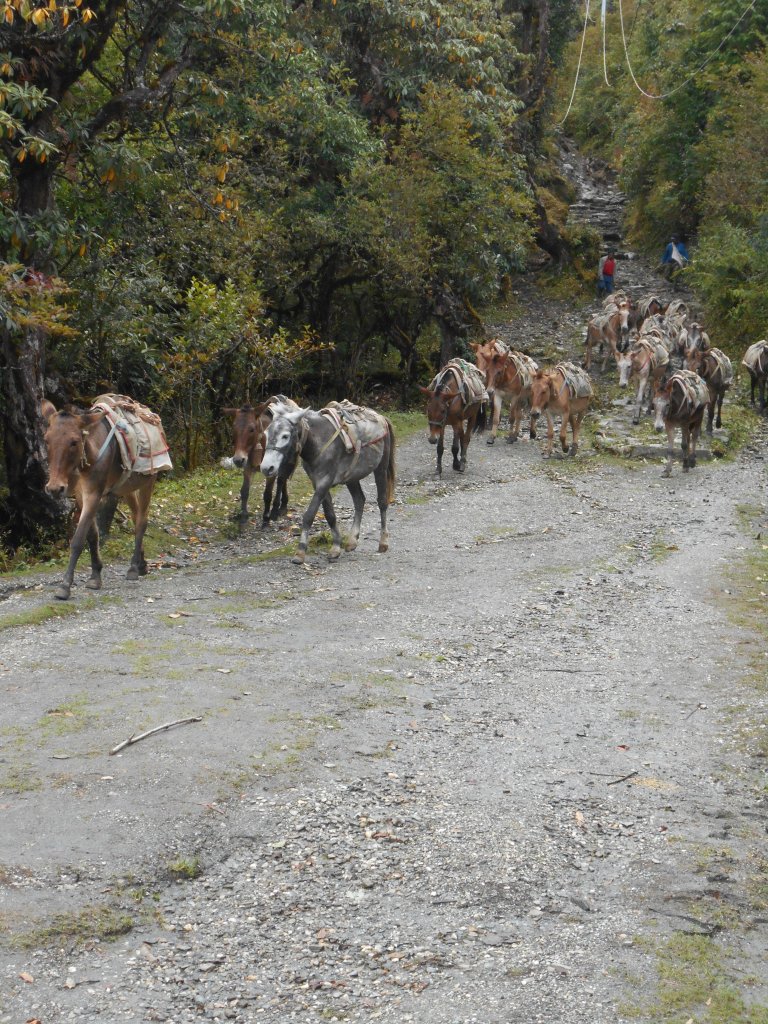 Regardless, it was a pretty walk, strolling through forests before eventually making it up the last climb that took us into Ghorepani, where, incredibly we seemed to be some of the first trekkers who’d arrived.

It was really not that amazing, since we had left from a village that was only four hours away, but it felt like an enormous victory, given that we were walking uphill as gingerly as if we’d had hip replacements.

Having first dibs on accomodation, Rose and I hustled around the various guesthouses until landing on one that was hard to believe: en suite bathroom (which – though that’s what it was – seems weird to refer a place where plywood acts as both wall and insulation and a thin, dank mattress rests on top of a two-by four bedframe as a suite) but it did the trick, because all was forgiven for the big benefit: ladies and gentlemen, please welcome hot, scalding mother’fukin water!

Yes, I know I previously said the best shower of my life was after the Pass. And that’s true. I won’t go back on that. But this thing lost by a blackhead on a nose tip.

For the next seven minutes, 2 minutes longer than is normally recommended for conservation, I tossed my head around in the water with the rapture of a long haired woman in a shampoo commercial.

I’m very sorry for those extra two minutes – despite going overtime, I feel like I used them as wisely as I could, restoring myself back to a positive mindset that was able to refrain from repeatedly asking the question: What the fuck am I doing here?

PS.  I’ve since cut a shower short in Canada by two minutes to make up for it. I hope you understand.

After we dipped back into sanity, Rose and I went to the restaurant where we chatted with other trekkers who soon began to look at us with wide eyes, after we explained how long we’d been going. Most were just starting a trek, one or two days in of maybe a 6 day total trek, so inadvertently, Rose and I held court as wizened veterans: speaking with people who from our standpoint, still had energy.

Knowing the end was nigh, I went to bed that night feeling a bit wistful, reviewing how far we’d come, and all the difficulties we’d faced.

I drifted off to sleep, feeling pretty proud of ourselves – temporarily forgetting about the next day.

A day that would start early, and feel like it would never end.